Last updated September 28, 2022
One of the National Seals of Japan

During the Meiji period, no one was permitted to use the Imperial Seal except the Emperor of Japan, who used a 16-petalled chrysanthemum with sixteen tips of another row of petals showing behind the first row. Therefore, each member of the Imperial family used a slightly modified version of the seal. Shinto shrines either displayed the imperial seal or incorporated elements of the seal into their own tag.

Earlier in Japanese history, when Emperor Go-Daigo, who tried to break the power of the shogunate in 1333, was exiled, he adopted the seventeen-petalled chrysanthemum in order to differentiate himself from the Northern Court's Emperor Kōgon, who kept the imperial 16-petalled mon.[ citation needed ]

The prime minister of Japan is the head of government of Japan. The prime minister chairs the Cabinet of Japan and has the ability to select and dismiss its Ministers of State. The prime minister also serves as the civilian commander-in-chief of the Japan Self Defence Forces and as a sitting member of the House of Representatives. The individual is appointed by the emperor of Japan after being nominated by the National Diet and must retain the nomination of the lower house and answer to parliament to remain in office. 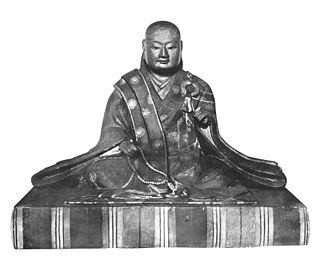 Emperor Hanazono was the 95th emperor of Japan, according to the traditional order of succession. His reign spanned the years from 1308 through 1318. 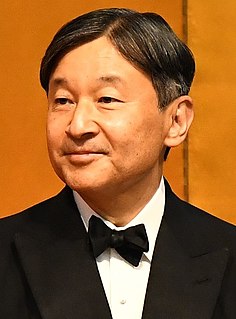 Naruhito is the Emperor of Japan. He acceded to the Chrysanthemum Throne on 1 May 2019, beginning the Reiwa era, following the abdication of his father, Akihito. He is the 126th monarch according to Japan's traditional order of succession. 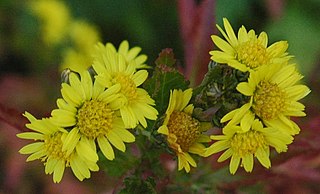 Mon (紋), also monshō (紋章), mondokoro (紋所), and kamon (家紋), are Japanese emblems used to decorate and identify an individual, a family, or an institution or business entity. While mon is an encompassing term that may refer to any such device, kamon and mondokoro refer specifically to emblems used to identify a family. An authoritative mon reference compiles Japan's 241 general categories of mon based on structural resemblance, with 5,116 distinct individual mon. However, it is well-acknowledged that there exist a number of lost or obscure mon. 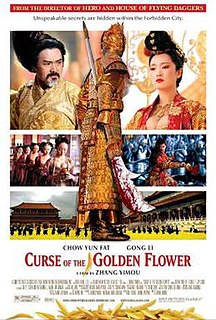 Curse of the Golden Flower is a 2006 Chinese epic wuxia drama film written and directed by Zhang Yimou. The Mandarin Chinese title of the movie is taken from the last line of the Qi dynasty poem written by the rebel leader Huang Chao who had revolted against the Tang dynasty.

The Government Seal of Japan, one of the country's national seals, is the emblem (mon) of paulownia used by the Prime Minister, the Cabinet and the Government of Japan on official documents. It is generally known as the 5-7 Paulownia, which has been used by those in power and is the official emblem of the Japanese government today. It resembles a stylized paulownia with 5-7-5 flowers. It is one of various paulownia mon, collectively known as the Paulownia Seals or the Paulownia Flower Seals.

Emperor Kōgon was the first of the Emperors of Northern Court during the Period of the Northern and Southern Courts in Japan. His reign spanned the years from 1331 through 1333. 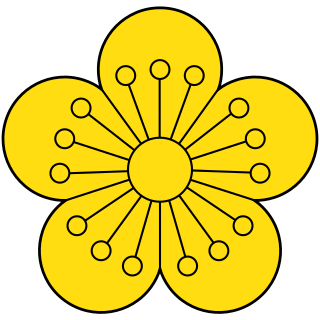 The Imperial Seal of Korea or Ihwamun was one of the symbols of the Korean Empire. It was originally the emblem of the royal family and was subsequently used for the coat of arms of the short-lived empire. The symbol features a plum flower. Plum blossoms commonly known as the Maehwa, signals the beginning of spring in Korea. Plum blossom was taken to symbolize courage in the face of hardship, especially in something so physically delicate, and has been long admired by the Korean and Chinese literati. As the Plum tree blossoms between two seasons, it is also seen as a symbol of spring - bringing warmth, transition and the promise of fruitfulness. Since ancient times, plum blossom has been filled with meaning and mystery. Plum blossoms bloom at the end of the winter, and because of this, they are called the herald of spring. They also symbolize perseverance because of how they can possibly bloom during the cold winter. Since they are considered the first flower of the year, they also represent purity and renewal. Plum flowers are supposed to have five petals. Its five petals are believed to carry 5 different blessings such as: wealth, health, virtue, peaceful and natural death.

The Japanese honours system is a system implemented for rewarding awards to Japanese and non-Japanese persons for their achievements and service to Japan.

The Imperial Seal of the Emperor of Manchukuo had a design of orchid flower, with five sorghum branches in between the five orchid petals. It was entirely yellow.

The official court dress of the Empire of Japan, used from the Meiji period until the end of the Second World War, consisted of European-inspired clothing of the 1870's. It was first introduced at the beginning of the Meiji period and maintained through the institution of the constitutional monarchy by the Meiji Constitution, and represented the highest uniforms in use at the time. Uniforms for members of the kazoku peerage and civil officials were officially set.

The 2019 Japanese imperial transition occurred on 30 April 2019 when the then 85-year-old Emperor Akihito of Japan abdicated from the Chrysanthemum Throne after reigning for 30 years, becoming the first Emperor of Japan to do so since 1817. This marked the end of the Heisei era and the inception of the Reiwa era, and saw numerous festivities leading up to the accession of his son and successor, Emperor Naruhito. The Enthronement Ceremony took place on 22 October 2019. Akihito's younger son, Prince Akishino, is his brother's heir presumptive. 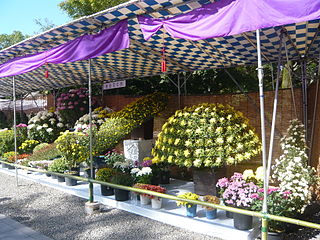 A chrysanthemum exhibition is a flower show that takes place in various parts of Japan every autumn from October to November. Other terms used are also “Chrysanthemum Festival” or “Chrysanthemum Competition”.

The Law for Special Exception of the Imperial House Law concerning Abdication, etc. of Emperor(Japanese: 天皇の退位等に関する皇室典範特例法／てんのうのたいいとうにかんするこうしつてんぱんとくれいほう), or in short Emperor Abdication Law(Japanese: 天皇退位特例法), is a Japanese law enacted for the abdication of Akihito, the 125th Emperor of Japan.