The Kōdōha or Imperial Way Faction (皇道派) was a political faction in the Imperial Japanese Army active in the 1920s and 1930s. The Kōdōha sought to establish a military government that promoted totalitarian, militaristic and aggressive expansionistic ideals, and was largely supported by junior officers. The radical Kōdōha rivaled the moderate Tōseiha (Control Faction) for influence in the army until the February 26 Incident in 1936, when it was de facto dissolved and many supporters were disciplined or executed.

The Kōdōha was never an organized political party and had no official standing within the Army, but its ideology and supporters continued to influence Japanese militarism into the late 1930s. [1]

The Empire of Japan had enjoyed economic growth during World War I but this ended in the early 1920s with the Shōwa financial crisis. Social unrest increased with the growing polarization of society and inequalities, such as trafficking in girls, with the labor unions increasingly influenced by socialism, communism and anarchism, but the industrial and financial leaders of Japan continued to get wealthier through their inside connections with politicians and bureaucrats. The military was considered "clean" in terms of political corruption, and elements within the army were determined to take direct action to eliminate the perceived threats to Japan created by the weaknesses of liberal democracy and political corruption.

The founders of the Kōdōha were General Sadao Araki and his protégé, Jinzaburō Masaki. Araki was a noted political philosopher within the army, who linked the ancient Japanese bushido code of the samurai with ideas similar to European fascism to form the ideological basis of his philosophy, which linked the Emperor, the people, land and morality as one and indivisible.

The Kōdōha envisioned a return to an idealized pre-industrialized, pre-westernized Japan in which the state was to be purged of corrupt bureaucrats, opportunistic politicians, and greedy zaibatsu capitalists. The state would be run directly by Emperor Hirohito in a "Shōwa Restoration" assisted by the military. Domestically, the state would return to the traditional values of Japan, and externally, war with the Soviet Union was not only unavoidable, but necessary to eliminate the perceived threat posed by communism. [2] In a news conference in September 1932, Araki first mentioned the word "Kōdōha" ("The Imperial Way"), from which his movement received its popular name.

Araki became Minister of War in the cabinet of Prime Minister Inukai in 1931, and Masaki became Vice Chief of the Imperial Japanese Army General Staff. Both began to purge followers of their rival General Kazushige Ugaki from important posts in both the ministry and the general staff. [1] Whereas Ugaki was pushing for a modernization of the military in terms of materials and technology, Araki and his followers argued that the spiritual training, or élan, of the Army was more important.

Tetsuzan Nagata and Hideki Tōjō created the Tōseiha (Control Faction) group, a loose faction united mostly by their opposition to Araki and his Kōdōha.

Fundamental to both factions, however, was the common belief that national defense must be strengthened through a reform of national politics. Both factions adopted some ideas from totalitarian and fascist political philosophies, and espoused a strong skepticism of political party politics and representative democracy. However, rather than the confrontational approach of the Kōdōha, which wanted to bring about a revolution, the Tōseiha foresaw that a future war would be a total war, which would require the cooperation of the bureaucracy and the zaibatsu conglomerates to maximize Japan's industrial and military capacity. [3] The Kōdōha was strongly supportive of the Strike North strategy of a preemptive strike against the Soviet Union, but the Tōseiha wanted a "more cautious" defense expansion by the Strike South policy. [4]

After the Manchurian Incident, the two cliques struggled against each other for dominance over the military. [5] The Kōdōha was initially dominant; however, after the resignation of Araki in 1934 due to ill health, the Kōdōha began to suffer a decline in its influence. Araki was replaced by General Senjūrō Hayashi, who had Tōseiha sympathies. [2]

In November 1934, a plot by Kōdōha army officers to murder a number of important politicians was discovered before it could be implemented. The Tōseiha faction forced the resignation of Masaki from his position as Inspector General of Military Education (the third most powerful position in the Japanese Army hierarchy) for his complicity in the plot, and demoted some 3,000 other officers.

In retaliation, a Kōdōha officer, Saburō Aizawa, murdered Tōseiha leader General Tetsuzan Nagata in the Aizawa Incident. Aizawa's military tribunal was held under the jurisdiction of the First Infantry Division in Tokyo, whose commander, General Heisuke Yanagawa, was a follower of Araki. The trial thus became a vehicle by which the Kōdōha was able to denounce the Tōseiha, portray Aizawa as a selfless patriot, and Nagata as an unprincipled power-mad schemer. [6]

At the climax of the Aizawa trial, to reduce tensions on the Tokyo area, the First Infantry Division was ordered from Tokyo to Manchuria. Instead, this caused the situation to escalate further, as the Kōdōha decided that the time was right for direct action, and backed the First Infantry Division in an attempted coup d'état on 26 February 1936 known as the February 26 Incident. The failure of the coup three days later resulted in the almost complete purge of Kōdōha members from top army positions and the resignation of their leader Sadao Araki.

Thus, after the February 26 Incident, the Kōdōha effectively ceased to exist, and the Tōseiha lost most of its raison d'être . [7] Although Tōseiha followers gained control of the army, the Kōdōha ideals of spiritual power and imperial mysticism remained embedded in the army, as did its tradition of insubordination of junior officers (gekokujō), and resurfaced with the outbreak of the Second Sino-Japanese War in 1937. [8]

Senjūrō Hayashi was an Imperial Japanese Army commander of the Chōsen Army of Japan in Korea during the Mukden Incident and the invasion of Manchuria, and a politician, briefly serving as Prime Minister of Japan in 1937. 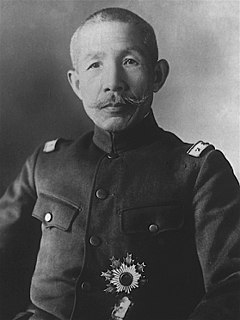 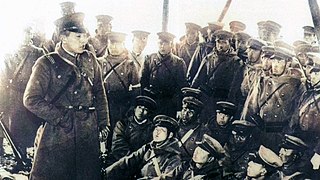 The February 26 Incident was an attempted coup d'état in the Empire of Japan on 26 February 1936. It was organized by a group of young Imperial Japanese Army (IJA) officers with the goal of purging the government and military leadership of their factional rivals and ideological opponents. 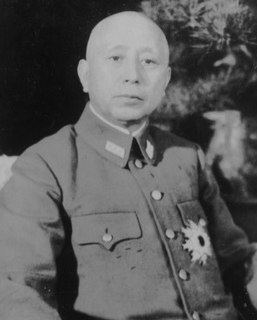 The Tōseiha or Control Faction (統制派) was a political faction in the Imperial Japanese Army active in the 1920s and 1930s. The Tōseiha was a grouping of moderate officers united primarily by their opposition to the radical Kōdōha faction and its aggressive expansionistic and anti-modernization ideals. The Tōseiha rivaled the Kōdōha for influence in the army until the February 26 Incident in 1936, when the Kōdōha was de facto dissolved and many supporters were disciplined or executed. The Tōseiha became the primary influence in the army, but the Kōdōha ideology and its supporters continued to influence Japanese militarism into the late 1930s.

The March Incident was an abortive coup d'état attempt in Japan, in March 1931, launched by the radical Sakurakai secret society within the Imperial Japanese Army, aided by civilian ultranationalist groups.

Saburō Aizawa was a Japanese military officer of the Imperial Japanese Army who assassinated Tetsuzan Nagata in the Aizawa Incident in August 1935.

Jinzaburō Masaki was a general in the Imperial Japanese Army in World War II. He was regarded as a leader of the radical political faction within the Japanese military.

Sakurakai, or Cherry Blossom Society was an ultranationalist secret society established by young officers within the Imperial Japanese Army in September 1930, with the goal of reorganizing the state along totalitarian militaristic lines, via a military coup d'état if necessary. Their avowed goal was a Shōwa Restoration, which they claimed would restore the Emperor Hirohito to his rightful place, free of party politics and evil bureaucrats in a new military dictatorship. 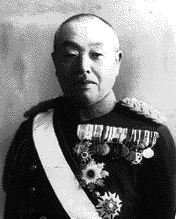 Jōtarō Watanabe was a general in the early Shōwa period Imperial Japanese Army, noted as one of the victims of the February 26 Incident. 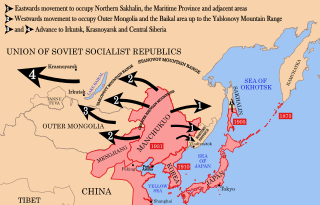 Hokushin-ron was a pre-World War II political doctrine of the Empire of Japan which stated that Manchuria and Siberia were Japan's sphere of interest and that the potential value to Japan for economic and territorial expansion in those areas was greater than elsewhere. Its supporters were sometimes called the Strike North Group. It enjoyed wide support within the Imperial Japanese Army during the interwar period, but was abandoned in 1939 after military defeat on the Mongolian front at the Battles of Khalkhin Gol and the signing of Soviet–Japanese Neutrality Pact in 1941. It was superseded by the diametrically-opposite rival policy, Nanshin-ron, which regarded Southeast Asia and the Pacific Islands as Japan's political and economic sphere of influence and aimed to acquire the resources of European colonies while neutralising the threat of Western military forces in the Pacific.