At the vicinity of where Independence Hall now stands, sixty-six families gathered on April 11, 1909 to conduct a lottery for plots of land in a new Jewish neighborhood, to be known as Ahuzat Bayit. Meir and Zina Dizengoff acquired plot number 43, on which they built their home. Meir Dizengoff served as the head of the new neighborhood council. In 1910, at a general meeting, the residents of Ahuzat Bayit, inspired by Theodor Herzl's Altneuland (English: Old-New Land), unanimously decided to rename their neighborhood Tel Aviv. As the neighborhood grew and became a city, Dizengoff became its first mayor.

In 1930, after the death of his wife, Dizengoff donated his house to his beloved city of Tel Aviv and requested that it be turned into a museum. The house underwent extensive renovations and became the Tel Aviv Museum of Art in 1932. The museum moved to its current location in 1971.

In the main hall of the building, at 4 PM on May 14, 1948, in the presence of the members of the Vaad Leumi (Jewish National Council) and the leaders of the Yishuv, David Ben-Gurion proclaimed the establishment of the State of Israel, eight hours before the British Mandate of Palestine was due to end. After Ben-Gurion read the Declaration of Independence, Rabbi Fischman (Maimon) recited the Shehecheyanu blessing, and the Declaration was signed. The ceremony concluded with the singing of Hatikvah, now Israel's national anthem.

The upper floors of the building houses a bible museum, featuring archaeological artifacts and works of art with biblical themes.

In 1978, Independence Hall was restored to resemble its appearance at the time of the declation of independence and opened to the public. It now houses exhibits on the signing of the declaration and the history of Tel Aviv-Yafo.

The Israeli Declaration of Independence, formally the Declaration of the Establishment of the State of Israel, was proclaimed on 14 May 1948 by David Ben-Gurion, the Executive Head of the World Zionist Organization, Chairman of the Jewish Agency for Palestine, and soon to be first Prime Minister of Israel. It declared the establishment of a Jewish state in Eretz-Israel, to be known as the State of Israel, which would come into effect on termination of the British Mandate at midnight that day. The event is celebrated annually in Israel with a national holiday Independence Day on 5 Iyar of every year according to the Hebrew calendar. 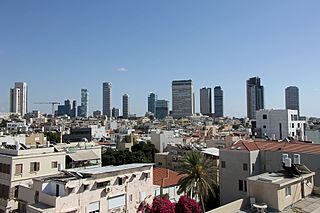 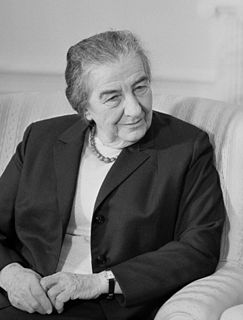 Golda Meir was an Israeli teacher, kibbutznik, stateswoman, politician and the fourth Prime Minister of Israel.

Moshe Sharett was the second Prime Minister of Israel (1954–55), serving for a little under two years between David Ben-Gurion's two terms. He continued as Foreign Minister (1955–56) in the Mapai government.

Gush Dan is a conurbation in Israel, located along the country's Mediterranean coastline. It includes areas from both the Tel Aviv and the Central District, or sometimes the whole Metropolitan Area of Tel Aviv, which includes a small part of the Southern District as well. Gush Dan is the largest conurbation and metropolitan area in Israel, with the metropolitan area having an estimated population of 4,054,570 residents, 95% of whom are Israeli Jews. Despite making up less than 8% of Israel's total land area, it houses about 45% of the country's total population.

Tel Aviv Museum of Art is an art museum in Tel Aviv, Israel.

Nachum Gutman was a Moldovan-born Israeli painter, sculptor, and author. 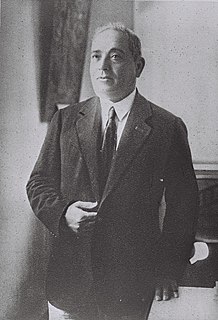 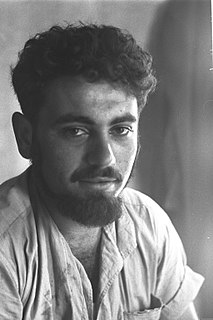 Menashe Kadishman was an Israeli sculptor and painter.

Moshe Ziffer was an Israeli artist and sculptor.

David Remez was an Israeli politician, the country's first Minister of Transportation, and a signatory of the Israeli declaration of independence. 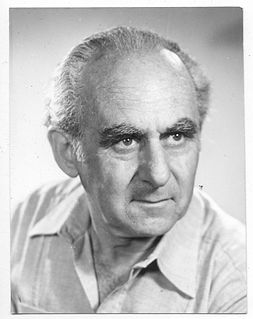 Otte Wallish (1903–1977) was a Czech emigre to Israel who established himself as a graphic designer and contributed to the symbolic self-representation of the Jewish state.

Dizengoff Square or Dizengoff Circus is an iconic public square in Tel Aviv, on the corner of Dizengoff Street, Reines Street and Pinsker Street. One of the city's main squares, it was built in 1934 and inaugurated in 1938. 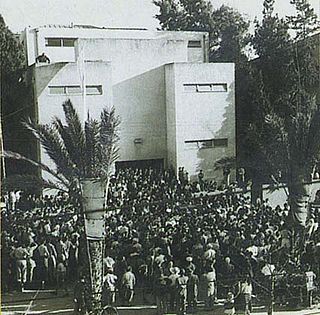 Carl Rubin was an Israeli architect known for his work in the international style. He designed many of the iconic buildings in this style in Tel Aviv.

The Ben-Gurion House is a historic house museum in Tel Aviv, which served as the family home of pre-State Zionist leader and then first Defense and Prime Minister of Israel, David Ben-Gurion, between 1931 and 1953. Until his death in 1973 it continued serving as an additional residence, along with two others, one private – "Ben-Gurion's hut" at Kibbutz Sde Boker in the Negev, and the official residence as Prime Minister of Israel during his multiple terms as head of government. The latter, known as Julius Jacobs House, is located in Rehavia, Jerusalem. 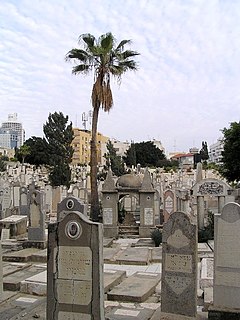 Trumpeldor Cemetery, often referred to as the "Old Cemetery," is a historic cemetery on Trumpeldor Street in Tel Aviv, Israel. The cemetery covers 10.6 acres, and contains approximately 5,000 graves.

'Froumine or Frumin House was the temporary abode of the Israeli Parliament, the Knesset, from 1950 to 1966. The building is located at 24 King George Street in downtown Jerusalem. The first to the fifth Knesset sessions were conducted there.

The following is a timeline of the history of the city of Tel Aviv, Israel.