Last updated June 18, 2021
Diplomatic relations between the Republic of India and Malaysia

India–Malaysia relations (Hindi : भारत-मलेशियाई संबंध; Malay : Hubungan India-Malaysia), also called Indian-Malaysian relations or Indo-Malaysian relations, refer to bilateral foreign relations between India and Malaysia. India has a high commission in Kuala Lumpur, [1] and Malaysia has a high commission in New Delhi [2] and a consulate general in Chennai and Mumbai. [3] [4] Both countries are full members of the Commonwealth of Nations, [5] Asian Union and G15. [6] India and Malaysia are also connected by various cultural and historical ties that date back to antiquity. [7] The two countries are on excellently friendly terms with each other seeing as Malaysia is home to a strong concentration of Indian immigrants. Mahathir Mohamad, the fourth and longest serving Prime Minister of Malaysia has Indian ancestry. [8] On trade front their bilateral trade volume stands at $10.5 billion and is poised to reach $25 billion by 2020.

Following the visit by then Prime Minister Najib Razak in 2017, both India and Malaysia agreed to expand co-operation in new chapter in areas like infrastructures development and building of smart cities. Many in the Indian government and their community feel the ties under 7th Malaysian Prime Minister Mahathir are decreasing since he favours Pakistan. [9]

Official diplomatic relations between both modern states was established in 1957, following the Federation of Malaya independence. [10] Since then, both countries leaders has made several visits to each others. [11]

In 2020, following comments from Malaysian Prime Minister Mahathir Mohamad speaking in opposition to the revocation of Kashmir's special status and the passing of the Citizenship Amendment Act, India imposed restrictions on Malaysian palm oil imports. [12] But the ousting of Mahathir Mohamad from the Malaysian Prime Minister's seat in late March had blown for a fresh reconciliation of ties when Muhyiddin Yassin which had climbed to power in the face of huge domestic and regional scrutiny for conducting a bypass of election rights of citizens, had signed a record deal with India to import 100,000 tones of rice. [13] In response to this, The Indian government lifted any sort of trade bans placed on the imports of Malaysian palm oil, thus subsequently increasing the import volume to an all-time high average of 500,000 tones per month. [14]

From 2000 to 2013, Malaysia is the 19th largest investor in India with cumulative FDI inflows valued at US$618.37 million. More than US$6 billion Malaysian investments also come in the form of telecommunications, healthcare, banking and construction projects. [11] Trade between the two countries has increased from just US$0.6 billion in 1992 to US$13.32 billion in 2012. Beside that, Indian industrial, IT and healthcare companies also investing in Malaysia along with around 150,000 Indians (including 10,000 Indian expatriates) skilled and semi-skilled workers been employed in the country in the sectors of IT, manufacturing and banking. [11] Malaysian companies as well participating in many infrastructure projects across different Indian states. [9]

In 2017, India and Malaysia signed a new business deal amounting to U$36 billion with the exchange of 31 business memorandum of understanding (MoUs), the largest in the history of economic relations between the two countries. [15] There is also a Malaysia India Business Council. [16]

Between the 1960s and 1970s, around 30,000 Malaysian students have studied in Indian educational institutions, mostly in the medical field, with over 30% of the doctors in Malaysia today having been educated in India. [17] The Indian government also provides scholarship to Malaysian students. Due to many Malaysian medical students' need to pursue their education in India, the Manipal Global Education Group agreed to set up their campuses in Malaysia. [17]

Since before the formation of Malaysia, many of the country security forces members are trained in India. [18] In counter to the growing Chinese influence, India has expressed to increase military and security co-operation with Malaysia.[ citation needed ]

Malaysia–United States relations are bilateral ties between Malaysia and the United States established diplomatic ties upon Malayan independence in 1957. The US was, and still is one of the largest trading partners for Malaysia and is traditionally considered to be Malaysia's oldest and closest ally in military, economic and education sectors. Malaya was the predecessor state to Malaysia, a larger federation which was formed through the merger of Malaya, North Borneo, Sarawak and Singapore in 1963. Immediately before the merger, the latter three territories were previously part of the British Empire. But the US had consular and commercial presence in Malaya since the 1800s. US merchants, especially Joseph William Torrey together with Thomas Bradley Harris also had commercial interests in north western coast of Borneo in the 19th century as well, where they established the American Trading Company of Borneo. 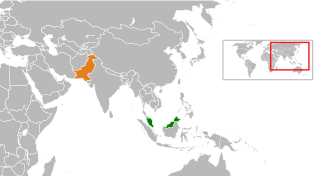 Bangladesh–Malaysia relations refers to the relations between the two countries. Malaysia has a high commission in Dhaka and Bangladesh has a high commission in Kuala Lumpur. Both nations are members of the Commonwealth of Nations, the Organisation of Islamic Cooperation, the Developing 8 Countries and the Non-Aligned Movement. Malaysia was one of the first countries to recognise the independence of Bangladesh in 1971.

Japan–Malaysia relations refers to bilateral foreign relations between the two countries, Japan and Malaysia. The earliest recorded historical relation between the two nations are the trade relations between the Malacca Sultanate and the Ryūkyū Kingdom in the 15th century. Small numbers of Japanese settlers migrated to various parts of present-day Malaysia throughout the 19th century. This continued well into the 20th century, until relations reached an abrupt nadir with the rise of the Empire of Japan and its subsequent invasion and occupation of British Malaya and Borneo during World War II. Relations gradually improved after the war, culminating in Malaysia's "Look East" policy during the first premiership of Mahathir Mohamad in the 1980s. 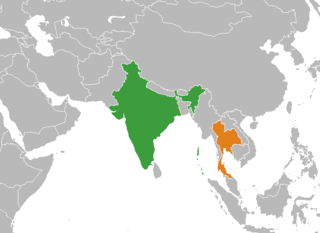 India-Thailand relations, also called Indian-Thai relations or Indo-Thai relations, refer to the bilateral relations between India and Thailand. Relations were established in 1947, soon after India gained independence. India shares a long sea border with Thailand as India's Andaman and Nicobar Islands share a maritime border with Thailand along the Andaman Sea. The past few years since 2001 have witnessed growing warmth, increasing economic and commercial links, exchange of high-level visits on both sides, and the signing of various agreements leading to a further intensification of relations. Thailand and India are cooperating in various multilateral fora like India's dialogue partnership with ASEAN, the ASEAN Regional Forum (ARF), and the East Asia Summit, the sub-regional grouping BIMSTEC involving Bangladesh, India, Sri Lanka, Thailand, Myanmar, Nepal and Bhutan, and trilateral transport linkages with Thailand, Myanmar and India. India is a member of the Asia Cooperation Dialogue (ACD) initiated by Thailand in 2002 and of the Mekong–Ganga Cooperation (MGC), a group of six countries. 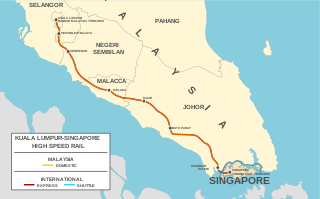 The Kuala Lumpur–Singapore high-speed rail (HSR) is a cancelled railway project to link Kuala Lumpur, Malaysia to Singapore via a high-speed rail line. It was first proposed by then Malaysian prime minister Najib Razak in September 2010. Singapore prime minister Lee Hsien Loong formally agreed to the joint project in February 2013, with the HSR originally expected to be completed by 2026. Israel–Malaysia relations refers to commercial and cultural ties between Israel and Malaysia. The two countries currently do not maintain formal diplomatic relations. While Malaysia officially maintains an outwardly hostile position towards Israel, commercial relations between the two countries do exist. Malaysian passports bear the inscription: "This passport is valid for all countries except Israel". Israeli passport holders are not permitted to enter Malaysia without written permission from the Malaysian Ministry of Home Affairs. The recognition of Israel is a politically delicate issue for the Malaysian government, as the Southeast Asian country is an ardent supporter of Palestinian rights and opposes Israeli jurisdiction over East Jerusalem. However, there is a possibility of Malaysia-Israel relation beyond 2040 if Israel concedes Jerusalem and 30% of its countries to Palestine.

Malaysia–Mauritius relations refers to the bilateral foreign relations between Mauritius and Malaysia. Mauritius has a high commission in Kuala Lumpur, while Malaysia embassy in Zimbabwe is also accredited to Mauritius. 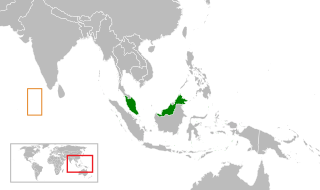 Malaysia–Mexico relations refers to bilateral relations between Malaysia and Mexico. Both nations are mutual members of the Asia-Pacific Economic Cooperation.