Inglesham is a small village and civil parish in the Borough of Swindon, Wiltshire, England, notable for the Grade-I listed St John the Baptist Church. The village is just off the A361 road about 1 mile (1.6 km) south-west of Lechlade in Gloucestershire. Most of the population lives in the hamlet of Upper Inglesham, which is on the main road about 1.3 miles (2 km) south of the village.

As the parish's population is small it has a parish meeting instead of a parish council. [2]

The Round House, Inglesham is often used by boaters as a landmark to denote the westernmost point most cabin cruisers and narrowboats can travel along the Thames, as beyond Inglesham the river becomes too clogged with vegetation and too shallow to effectively navigate.

The 13th-century Church of England parish church of St John the Baptist was restored in 1888–89 [3] and is listed Grade I. [4] It is now redundant and is cared for by the Churches Conservation Trust.

In the churchyard is a Grade II* listed 15th-century stone cross. The base and shaft survive but the cross itself has been lost. [5]

Before the Dissolution of the Monasteries, the Cistercian Beaulieu Abbey held the manor and benefice. [6]

Until 1844 Inglesham was a detached part of Berkshire. It was transferred to Wiltshire by the Counties (Detached Parts) Act 1844. [7]

Church Farmhouse is a former watermill that was rebuilt in the 17th century [8] and is listed Grade II*. [9] Several other houses in the parish are listed Grade II, as are the late 18th-century Halfpenny Bridge that carries the A361 across the Thames into Lechlade, [10] and a Cotswold stone rubble barn at College Farm built in about 1800. [11]

Inglesham lock is at the eastern end of the Thames and Severn Canal and the Cotswold Canals Trust is currently raising funds to restore its structure and part of the canal. The Round House was the lock keeper's cottage.

The Thames and Severn Canal is a canal in Gloucestershire in the south of England, which was completed in 1789. It was conceived as part of a canal route from Bristol to London. At its eastern end, it connects to the River Thames at Inglesham Lock near Lechlade, while at its western end, it connects to the Stroudwater Navigation at Wallbridge near Stroud, and thence to the River Severn. It has one short arm (branch), from Siddington to the town of Cirencester. It includes Sapperton Tunnel, which when built was the longest canal tunnel in Britain, and remains the second-longest complete tunnel. There were always problems with water supply, as no reservoirs were built, while the summit section near the tunnel ran through porous limestone, and there were constant difficulties with leakage. Competition from the railways took much of the canal's traffic by the end of the 19th century, and most of the canal was abandoned in 1927, the remainder in 1941. 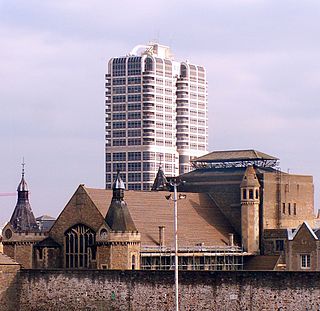 The Borough of Swindon is a local government authority in South West England, centred on the town of Swindon and forming part of the ceremonial county of Wiltshire.

Lechlade, or Lechlade-on-Thames, is a town at the southern edge of the Cotswolds in Gloucestershire, England, 55 miles (89 km) south of Birmingham and 68 miles (109 km) west of London. It is the highest point at which the River Thames is navigable, although there is a right of navigation that continues south-west into Cricklade, situated in the neighbouring county of Wiltshire. The town is named after the River Leach that joins the Thames near The Trout Inn and St. John's Bridge. 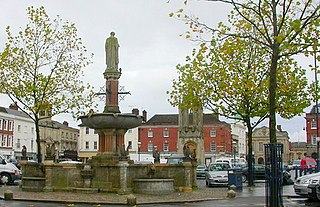 Devizes is a market town and civil parish in Wiltshire, England. It developed around Devizes Castle, an 11th-century Norman castle, and received a charter in 1141. The castle was besieged during the Anarchy, a 12th-century civil war between Stephen of England and Empress Matilda, and again during the English Civil War when the Cavaliers lifted the siege at the Battle of Roundway Down. Devizes remained under Royalist control until 1645, when Oliver Cromwell attacked and forced the Royalists to surrender. The castle was destroyed in 1648 on the orders of Parliament, and today little remains of it.

The A361 is an A class road in England and at 195 miles (314 km) is the longest 3 digit A road in the UK. It runs south from Ilfracombe on the north Devon coast to Barnstaple, turning south-east to Tiverton then, after a break, north east from Taunton in Somerset through Street and Glastonbury, along the bottom of the Mendip Hills through Shepton Mallet, past Frome and then into Wiltshire through Trowbridge, Devizes, Avebury and Swindon. It then runs through the eastern Cotswolds, via Lechlade, Burford and Chipping Norton and on through Banbury and Daventry before terminating at its junction with the A5 road at the village of Kilsby on the Northamptonshire-Warwickshire border near Rugby. Despite its length, most of the road is non-primary and relatively unimportant.

Cricklade is a small town and civil parish on the River Thames in north Wiltshire, England, midway between Swindon and Cirencester. It is the first downstream town on the Thames. The parish population at the 2011 census was 4,227.

Shalbourne is a civil parish in the English county of Wiltshire, about 3 miles (4.8 km) southwest of Hungerford, Berkshire. Besides a village of the same name, the parish has a number of widely spaced small settlements including Bagshot and Stype, to the north, and Rivar and Oxenwood to the south. Before 1895, about half of the parish of Shalbourne lay in Berkshire.

Biddestone is a village and civil parish in northwest Wiltshire, England, about 3 miles (5 km) west of Chippenham and 2 miles (3.2 km) north of Corsham. The parish includes the smaller settlement of Slaughterford.

Ashton Keynes is a village and civil parish in north Wiltshire, England which borders with Gloucestershire. The village is about 5 miles (8 km) south of Cirencester and 3.5 miles (5.6 km) west of Cricklade. At the 2011 census the population of the parish, which includes the hamlet of North End, was 1,400.

Atworth is a village and civil parish in west Wiltshire, England. The village is on the A365 road between Melksham and Box, about 2.5 miles (4 km) northwest of Melksham and 4 miles (6 km) northeast of Bradford on Avon. The hamlet of Purlpit lies east of Atworth village, and in the south of the parish are the small village of Great Chalfield and the hamlet of Little Chalfield.

Wylye is a village and civil parish on the River Wylye in Wiltshire, England. The village is about 9+1⁄2 miles (15 km) northwest of Salisbury and a similar distance southeast of Warminster. 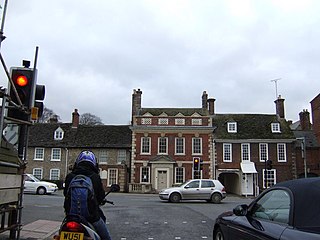 Highworth is a market town and civil parish in the Borough of Swindon, England, about 6 miles (10 km) northeast of Swindon town centre. The 2011 Census recorded a population of 8,151. The town is notable for its Queen Anne and Georgian buildings, dating from its pre-eminence in the 18th century. It also has a 13th-century church, St. Michael's.

Halfpenny Bridge is a bridge across the River Thames, at Lechlade, Gloucestershire, England. The bridge and its toll house are a Grade II listed building. It marks the start of the navigable Thames, although if the waters are high, the Thames can continue to be travelled by small and unpowered craft as far as Cricklade, over 10 miles (16 km) South-west.

Latton is a village and civil parish in Wiltshire, England, 1.5 miles (2.4 km) north of Cricklade, on the county border with Gloucestershire. The village is bypassed by the A419 road from Swindon to Cirencester. The parish includes the hamlet of Eysey, formerly a village with its own church and parish. 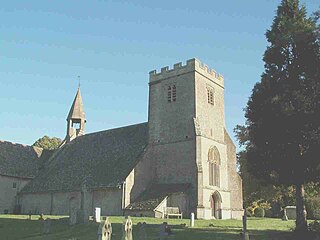 Castle Eaton is a village and civil parish in the ceremonial county of Wiltshire, England, on the River Thames about 4 miles (6.4 km) northwest of Highworth. It was historically in the area governed by the (former) Wiltshire County Council, but since 1997 has been part of the Swindon unitary authority. The Thames at Castle Eaton forms both the northern boundary of the parish and the county boundary with Gloucestershire.

Marston Meysey, pronounced and sometimes also spelt Marston Maisey, is a village and civil parish in Wiltshire, England, lying 3 miles (5 km) northeast of Cricklade on the county boundary with Gloucestershire. The parish includes the hamlet of Marston Hill.

St John the Baptist Church in Inglesham, near Swindon, Wiltshire, England, has Anglo-Saxon origins but most of the current structure was built around 1205. Much of the church has not changed since the medieval era. It is recorded in the National Heritage List for England as a Grade I listed building, and is now a redundant church in the care of the Churches Conservation Trust. It was declared redundant on 1 April 1980 and was vested in the Trust on 28 October 1981.

The Round House near Inglesham in the parish of Lechlade, Gloucestershire, England, is a circular former lock keeper's house at the junction of the River Thames and the Thames and Severn Canal. It is a Grade II listed building.