The Ingush ( /ˈɪŋɡʊʃ/ , Ingush : ГIалгIай, Ghalghaj, pronounced [ˈʁəlʁɑj] ) are a Northeast Caucasian native ethnic group of the North Caucasus, mostly inhabiting their native Ingushetia, a federal republic of Russian Federation. The Ingush are predominantly Sunni Muslims and speak the Ingush language. [3] The Ingush are known as the Vainakh.

The ethnonym Ingush derives from the village Angusht (Tarskoye in todays Northern-Ossetia), in which 24 elders representing several local Nakh clans took the oath to join Russia. [4] [5] While popular folklore claims the endonym Ghalghai comes from the Ingush word "ghala" (meaning tower/fortress), historical development indicates it is a composition of the words kha and khal, which directly means three cities. Inhabitants of the 3 settlements Targim, Khamkhi and Egikal, who operated as one, expanded their power into surrounding Nakh areas, building the grounds of what would later turn into the modern Ingush nation. [6] This is supported by the first actual mention of the word in 1590, when the "mountain people Kolkan" attacked 2 Russian ambassadors in the Darial pass [7] and the late establishment of the word among south-western Nakh people only several centuries later, in the early 1920s. [8]

The ancestors of the Ingush people have been historically mentioned under many different names, such as Dzurdzuks,Kists or Ghlighvi, [9] [10] although none of them was used as an ethnonym and are of Georgian origin. The ancient Greek historian Strabo wrote about the Gelai, an unknown people in the Caucasus he thought to be of Scythian origin, [11] which the American cartographer Joseph Hutchins Colton later used to label the Vainakh people in his map from 1856. [12] Contemporary sources mention the ethnonym Nakhchoy, which Chechens still use today. [13] However, due to political and hostile disagreements, the term was quickly replaced starting from the 19th century up to the introduction of "Vainakh" ("our people" in Chechen/Ingush) in the early 20th century. [14]

«The Shatoy and Nazran (Ingush) people are reluctant to call themselves Nakhchoy, which stems from their previous hostile attitudes towards the Chechens. But with the outpouring of heartfelt feelings at meetings, at a party, on the way, etc. they always confirm their unity of tribe, expressing themselves: "We are common brothers (wai tsa vezherey detsy)" or "We are the same Nakhchoy (wai tsa nakhchoy du)".» [15]

The Ingush never had a feudal system [16] and were always governerned by highly esteemed selected elders among the local clans. In 1770, the elders of 24 Ingush tribes signed a treaty with Russia, but are commonly considered under Russian rule from 1810. [17] The Ingush, however, considered themselves independent, and were unwilling to conform to Russian laws, which led to various skirmishes with Russian forces in Ingushetia, [18] such as the uprising of Nazran in 1858, when 5000 armed Ingush residing in Nazran tried storming the local fortress. After 2 failed attempts of aid in June and July by Imam Shamil, the Russians succeeded in suppressing the revolt. The leaders of the uprising were hanged and many of the participants physically punished. [19] Nevertheless many Ingush, like the national hero Utsig Malsag, [20] stood true to the oath with Russia from 1810, which included the order to fight off the enemies of Russia, particularly the Chechens and Kabardians. [21] Under Soviet rule during World War II the Ingush, along with the Chechens were falsely accused of collaborating with the Nazis and thus, the entire population was deported to the Kazakh and Kirghiz Soviet Socialist Republics. The Ingush were rehabilitated in the 1950s, after the death of Joseph Stalin, and allowed to return home in 1957, though by that time western Ingush lands had been ceded to North Ossetia.

«Ingush battle towers are in the true sense the pinnacle of the architectural and constructional mastery of the ancient population of the region. Striking in their simplicity of form, monumentality and strict grace. For their time, the Ingush towers were a true miracle of human genius.»

The Ingush are predominantly Sunni Muslims of the Shāfi‘ī Madh'hab, with a Sufi background belonging to the Qadiriyya tariqa of the Chechen preacher Kunta Haji. [23] [24]

Further information: Vainakh § Genetics, and Genetic history of the Caucasus

The Caucasus populations exhibit, on average, less variability than other populations for the eight Alu insertion poly-morphisms analysed here. The average heterozygosity is less than that for any other region of the world, with the exception of Sahul. Within the Caucasus, Ingushians have much lower levels of variability than any of the other populations. The Ingushians also showed unusual patterns of mtDNA variation when compared with other Caucasus populations (Nasidze and Stoneking, submitted), which indicates that some feature of the Ingushian population history, or of this particular sample of Ingushians, must be responsible for their different patterns of genetic variation at both mtDNA and the Alu insertion loci. [25] [26]

According to one test by Nasidze in 2003 (analyzed further in 2004), the Y-chromosome structure of the Ingush greatly resembled that of neighboring Caucasian populations (especially Chechens, their linguistic and cultural brethren). [27] [28]

There has been only one notable study on the Ingush Y chromosome. These following statistics should not be regarded as final, as Nasidze's test had a notably low sample data for the Ingush. However, they do give an idea of the main haplogroups of the Ingush.

In the mtDNA, the Ingush formed a more clearly distinct population, with distance from other populations. The closest in an analysis by Nasidze were Chechens, Kabardins and Adyghe (Circassians), but these were all much closer to other populations than they were to the Ingush. [28] 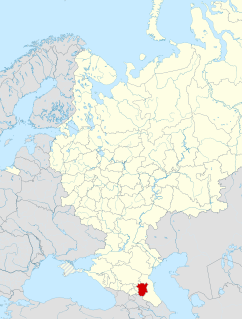 Chechnya, officially the Chechen Republic, is a republic of Russia situated in the North Caucasus of Eastern Europe, close to the Caspian Sea. The republic is part of the North Caucasian Federal District, and shares land borders with the country of Georgia to its south; and borders the Russian republics of Dagestan to its east and north, Ingushetia and North Ossetia–Alania to its west; while sharing a border with Stavropol Krai to its northwest. 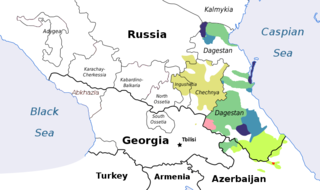 The Nakh languages are a group of languages within Northeast Caucasian, spoken chiefly by the Chechens and Ingush in the North Caucasus within Southern Russia.

Chechens, historically also known as Kisti and Durdzuks, are a Northeast Caucasian ethnic group of the Nakh peoples originating in the North Caucasus region primarily in Eastern Europe, located between the Black and Caspian Seas. They refer to themselves as Nokhchiy. Chechen and Ingush peoples are collectively known as the Vainakh since the 1930s and were known as Nakhchi prior. The majority of Chechens today live in the Chechen Republic, a subdivision of the Russian Federation. Chechens are predominantly Muslims.

Ingush is a Northeast Caucasian language spoken by about 500,000 people, known as the Ingush, across a region covering the Russian republics of Ingushetia and Chechnya.

Ingushetia, officially the Republic of Ingushetia, is a republic of Russia located in the North Caucasus of Eastern Europe. The republic is part of the North Caucasian Federal District, and shares land borders with the country of Georgia to its south; and borders the Russian republics of North Ossetia–Alania and Chechnya to its east and west; while having a border with Stavropol Krai to its north. 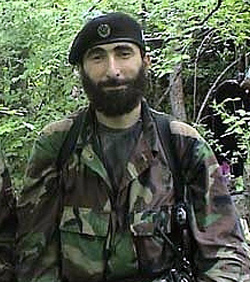 Ali Musaevich Taziev, also known as Akhmed Yevloev, Magomet Yevloyev, and Emir Magas; born 19 August 1974) is the former leader of both the Ingushetia-based Ingush Jamaat and as the military wing of the Caucasus Emirate. On 30 September 2006, Taziev was appointed to the post of commander of the Caucasian Front by the orders of Dokka Umarov. In July 2007, one year after Shamil Basayev’s death, Taziev became his official successor as the most high-ranking military commander in the rebel forces. He is believed to be personally responsible for the death of several local high-ranking security officials. 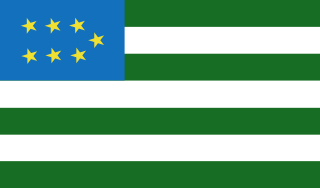 The Mountainous Republic of the Northern Caucasus was a country in the North Caucasus formed by the unification of Circassians, Chechens, Ingush, Ossetians and Dagestanis proclaimed at the congress of the North Caucasian peoples on May 1, 1917. It lived from 1917 until 1922.

The Bats people or the Batsbi (ბაცბი), are Nakh-speaking Tushetians in the country of Georgia. They are also known as the Ts’ova-Tush (წოვათუშები) after the Ts’ova Gorge in the historic Georgian mountain region of Tusheti. The group should not be confused with the neighbouring Kists – also a Nakh-speaking people who live in the nearby Pankisi Gorge.

In human genetics, Haplogroup J-M172 or J2 is a Y-chromosome haplogroup which is a subclade (branch) of haplogroup J-M304. Haplogroup J-M172 is common in modern populations in Western Asia, Central Asia, South Asia, Europe and North Africa. It is thought that J-M172 may have originated between the Caucasus Mountains, Mesopotamia and the Levant.

The Dvals were an old people in the Caucasus, their lands lying on both sides of the central Greater Caucasus mountains, somewhere between the Darial and Mamison gorges. This historic territory mostly covers today’s South Ossetia, a breakaway region of Georgia, and part of North Ossetia–Alania, Russia, and parts of Racha and Khevi historical regions in Georgia.

The Caucasian Front also called Caucasus Front or the Caucasian Mujahadeen, was formally established in May 2005 as an Islamic structural unit of the Chechen Republic of Ichkeria's armed forces by the decree of the separatist President of Chechnya Abdul-Halim Sadulayev during the Second Chechen War. 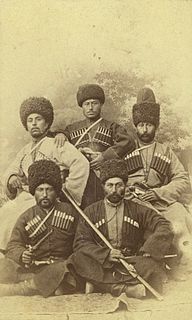 The Vainakh peoples are the speakers of the Vainakh languages. These are chiefly the ethnic Chechen, Ingush and Kist peoples of the North Caucasus, including closely related minor or historical groups.

The 1940–1944 insurgency in Chechnya was an autonomous revolt against the Soviet authorities in the Chechen-Ingush Autonomous Soviet Socialist Republic. Beginning in early 1940 under Khasan Israilov, it peaked in 1942 during the German invasion of North Caucasus and ended in the beginning of 1944 with the wholesale concentration and deportation of the Vainakh peoples from their native lands as well as from the locations across the USSR, resulting in the death of at least 144,000 civilians. However, scattered resistance in the mountains continued for years. 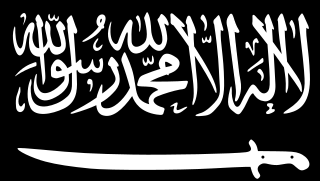 Vilayat Galgaycho was an Islamist militant organization connected to numerous attacks against the local and federal security forces in the Russian regions of Ingushetia and Chechnya in the North Caucasus. Since 2007 it has been a part of the Caucasus Emirate and takes part in the Insurgency in the North Caucasus. The group is thought to be responsible for the deaths of hundreds of people, mostly policemen, military personnel and officials.

The Vainakh languages are a dialect continuum that consists of the Chechen and Ingush languages, spoken mainly in the Russian republics of Chechnya and Ingushetia, as well as in the Chechen diaspora. Together with Bats, they form the Nakh branch of the Northeast Caucasian languages family.

The Durdzuks, also known as Dzurdzuks, was a Georgian name from The Georgian Chronicles used to describe a people in the North Caucasus, unanimously identified as the Vainakh peoples.

Various Y-DNA haplogroups have differing frequencies within each ethnolinguistic group in the Caucasus region.

Vainakhia, a historical territory of Chechens and Ingush, is located in the Russian Caucasus. It includes the historic lands of Vainakh Chechnya, Ingushetia, the eastern part of North Ossetia and parts of north and west Dagestan. It has many historical sites. In 2004, rebels attempted to create a Vainakh republic by merging Chechnya and Ingushetia.