The Interfax-Ukraine News Agency (Ukrainian : Інтерфакс-Україна) is a Kyiv-based [1] Ukrainian news agency founded in 1992. [2] The company belongs to the Russian news group Interfax Information Services. [3] The company publishes in Ukrainian, Russian and English. [3]

Viktor Fedorovych Yanukovych is a Ukrainian politician who served as the fourth President of Ukraine from 2010 until he was removed from office in the 2014 Ukrainian Revolution. From 2006 to 2007 he was the prime minister of Ukraine.

The Ministry of Internal Affairs of Ukraine executes state policy for the protection of rights and liberties of citizens, investigates unlawful acts against the interest of society and state, fights crime, provides civil order, ensures civil security and traffic safety, and guarantees the security and protection of important individuals. It is a centralised agency headed by a Minister of Internal Affairs. The ministry closely operates with the office of General Prosecutor of Ukraine. It oversees the National Police of Ukraine and the National Guard of Ukraine (gendarmerie).

Roshen Confectionery Corporation is a Ukrainian confectionery manufacturing group. It operates facilities in the Ukrainian cities of Kyiv, Ivankiv and Kremenchuk, as well as in Budapest, Hungary and Klaipėda, Lithuania. The name of the company was derived from the last name of its owner, Poroshenko.

Petro Oleksiyovych Poroshenko is a Ukrainian businessman and politician who served as President of Ukraine from 2014 to 2019.

Kyiv City Council, also known as Kyivrada, is the city council of Kyiv municipality, the highest representative body of the city community. The members of city council are directly elected by Kyivans and the council is chaired by the Mayor of Kyiv or the City Council Secretary. The deputies are elected for five-year terms.

Interfax is an independent Russian news agency. The agency is owned by Interfax News Agency joint-stock company and is headquartered in Moscow.

Presidential elections were held in Ukraine on 17 January 2010. As no candidate received a majority of the vote, a run-off was held between Prime Minister Yulia Tymoshenko and opposition leader Viktor Yanukovych followed on 7 February.

Arseniy Petrovych Yatsenyuk is a Ukrainian politician, economist and lawyer who served as Prime Minister of Ukraine from 27 February 2014 to 14 April 2016. 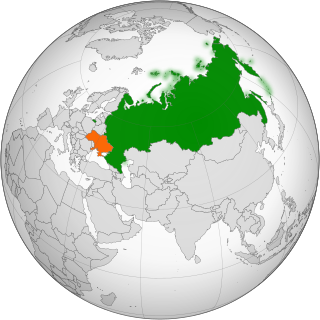 Russia–Ukraine relations refers to the relations between the Russian Federation and Ukraine. Currently, the two countries are engaged in the Russo-Ukrainian War which started in 2014 following Russian annexation of Crimea from Ukraine. The modern bilateral relationship between the Russian Federation and Ukraine formally started during World War I as the former Russian Empire was going through its political reform. In 1920, the bilateral relationship between the two countries was changed as Ukraine was conquered by the Russian Red Army and Polish Army. In the 1990s, immediately upon the dissolution of the Soviet Union, of which both Soviet Russia and Soviet Ukraine had been formally founding constituent republics, bilateral relations were revived. Relations between the two countries have been hostile since the 2014 Ukrainian revolution, followed by Russia's annexation of Crimea from Ukraine, and over Russia's backing for the separatists fighters of the Donetsk People's Republic and the Luhansk People's Republic in a war that by early 2020 had killed more than 13,000 people and brought Western sanctions on Russia.

The Ukrainian Democratic Alliance for Reform is a political party in Ukraine headed by retired Ukrainian professional heavyweight boxer and the WBC world heavyweight champion emeritus Vitali Klitschko. The party has been an observer member of the European People's Party (EPP) since 2013. 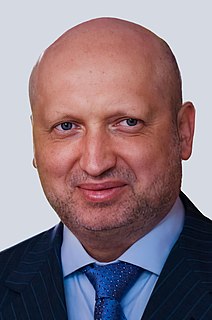 Oleksandr Valentynovych Turchynov is a Ukrainian politician, screenwriter, Baptist minister and economist. He is the former Secretary of the National Security and Defence Council of Ukraine. 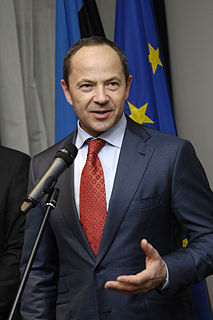 Serhiy Leonidovych Tihipko or Sergiy Tigipko is a Ukrainian politician and finance specialist who has been Vice Prime Minister of Ukraine. Tihipko was Minister of Economics in 2000 and subsequently served as Governor of the National Bank of Ukraine from 2002 to 2004. He ran unsuccessfully for President of Ukraine in the 2010 presidential election and participated in the 2014 presidential election, in which he placed fifth with 5.23 percent of the vote. Tihipko is also former Vice Prime Minister and Minister of Social Policy.

Volodymyr Makeyenko, is a Ukrainian politician. From 25 January 2014 to 7 March 2014, he was head of the Kyiv City State Administration. 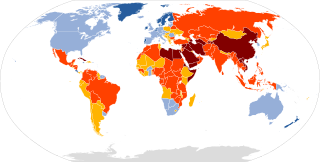 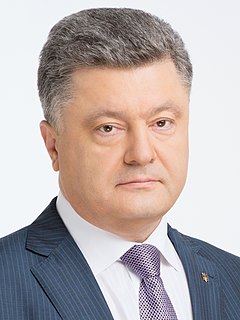 Snap Presidential elections were held in Ukraine on 25 May 2014, resulting in Petro Poroshenko being elected President of Ukraine. Originally scheduled to take place on 29 March 2015, the date was changed following the 2014 Ukrainian revolution. Poroshenko won the elections with 54.7% of the votes, enough to win in a single round. His closest competitor was Yulia Tymoshenko, who emerged with 12.81% of the votes. The Central Election Commission reported voter turnout at over 60% excluding those regions not under government control. Since Poroshenko obtained an absolute majority in the first round, a run-off second ballot was unnecessary.

The Ministry for Development of Economy and Trade is the main authority in the system of central government of Ukraine responsible for formation and realization of state economic and social development policies ; regulation of consumer prices; industrial, investment and trade economic policies; development of entrepreneurship; technical regulation and security of consumer rights; inter-agency coordination of economic and social cooperation of Ukraine with the European Union. 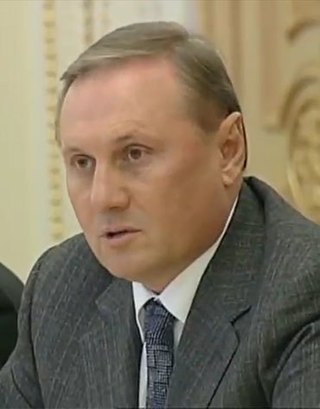 Oleksandr Yefremov or Aleksandr Efremov is a Ukrainian parliamentarian and politician. A former governor of the Luhansk Oblast, from 2010 until 2014 he was Party of Regions's faction leader in the Verkhovna Rada. On 14 February 2015 Yefremov was detained on suspicion of "abuse of power under aggravating circumstances". This arrest was effectively ended when his bail expired on 1 November 2015. Yefremov was again detained on 30 July 2016 on suspicion of violation of Ukraine's territorial integrity by helping to create the Luhansk People's Republic and misappropriation of property.

The Euromaidan was a wave of demonstrations and civil unrest in Ukraine, which began on the night of 21 November 2013 with very large public protests demanding closer European integration. The scope of the protests evolved over subsequent months, culminating in resignation of Azarov's government and ousting of President Yanukovych. Protesters also have stated they joined because of the dispersal of protesters on 30 November and "a will to change life in Ukraine". By 25 January 2014 the protests had been fueled by the perception of widespread government corruption, abuse of power, and violation of human rights in Ukraine.

The first government headed by Arseniy Yatsenyuk was created in Ukraine on 27 February 2014 in the aftermath of the Ukrainian revolution. The cabinet was formed as a coalition of the parties Batkivschyna, UDAR and Svoboda and the parliamentary factions Economic Development and Sovereign European Ukraine and other independent MPs. On 24 July 2014, UDAR and Svoboda and 19 independent MPs had exited from the coalition to pave the way for the early parliamentary elections of late October 2014. Prime Minister Yatsenyuk announced his resignation the same day, but the Verkhovna Rada declined his resignation on 31 July 2014.