Last updated May 27, 2021
International trade association for airlines
"IATA" redirects here. For other uses, see IATA (disambiguation).
Not to be confused with the International Civil Aviation Organization.

The International Air Transport Association (IATA /aɪˈɑːtə/ ) is a trade association of the world's airlines founded in 1945. IATA has been described as a cartel since, in addition to setting technical standards for airlines, IATA also organized tariff conferences that served as a forum for price fixing. [1]

IATA was formed in April 1945 in Havana, Cuba. It is the successor to the International Air Traffic Association, which was formed in 1919 at The Hague, Netherlands. [6] [7] At its founding, IATA consisted of 57 airlines from 31 countries. Much of IATA's early work was technical and IATA provided input to the newly created International Civil Aviation Organization (ICAO), which was reflected in the annexes of the Chicago Convention, the international treaty that still governs the technical of international air transport today.

The Chicago Convention did not result in a consensus on the economic regulation of the airline industry. According to Warren Koffler, IATA was formed to fill the resulting void and provide international air carriers with a mechanism to fix prices. [8]

In the late 1940s, IATA started holding conferences to fix prices for international air travel. IATA secretary J.G Gazdik stated that organization aimed to fix prices at reasonable levels, with due regard being paid to the cost of operations, in order to ensure reasonable profits for airlines. [9]

In 1947 at a time when many airlines were government-owned and loss-making, IATA operated as a cartel, charged by the governments with setting a fixed fare structure that avoided price competition. The first Traffic Conference was held in 1947. [10] in Rio de Janeiro and reached unanimous agreement on some 400 resolutions. IATA Director-General William Hildred recounted that about 200 of the resolutions at the Rio de Janeiro conference were related to establishing a uniform structure for tariffs charged for international air transportation. [11]

The American Civil Aeronautics Board did not intervene to stop IATA's price fixing, and in 1954 law professor Louis B. Schwartz condemned the board's inaction as an "abdication of judicial responsibility". [12] The Economist lambasted IATA's connivance with governments to fix prices and compared IATA with medieval guilds. [13]

In the early 1950s IATA's price fixing regime forced airlines to attempt to differentiate themselves through the quality of their passenger experience. [14] IATA responded by imposing strict limits on the quality of airline service. In 1958, IATA issued a formal ruling barring airlines from serving economy passengers sandwiches with "luxurious" ingredients. [15] [16] The economist Walter Adams observed that the limited service competition permitted by IATA tended to merely to divert traffic from one air carrier to another without at the same time enlarging the overall air transport market. [17]

From 1956 to 1975, IATA resolutions capped travel agent commissions at 7% of the airline ticket price. The legal scholar Kenneth Elzinga argued that IATA's commission cap harmed consumers by decreasing the incentive for travel agents to offer improved service to consumers. [18]

In 1982, IATA was described as "the world aviation cartel". [1] IATA enjoyed immunity from antitrust law in several nations. [8]

In 2006, the United States Department of Justice adopted an order withdrawing the antitrust immunity of IATA tariff conferences. [19] [20]

Between January 2007 and June 2008, the oil price almost tripled propelled by market speculations. Due to such an unusual price rise aviation industry suffered badly and as a result nine airlines went bankrupt with almost 14,000 layoffs taking place. The Air Transport Association appointed ex-officio David Fuscus to manage the crisis and execute campaigns with the aim to refocus the fuel prices and oil speculation, which finally resulted in reducing the oil price by 35 percent. [21] [22]

In March 2020, the COVID-19 pandemic interrupted routine flights around the world. In the immediate aftermath most airlines, because of the physical distancing policies implemented by national governments, reduced their seat loading by eliminating the sale of the middle seat in a row of three. This reduction averaged out to a load factor of 62% normal, well below the IATA industry break-even level of 77%. Fares would need to rise as much as 54% if a carrier were to break even, according to calculations done by the IATA, who posit that because of "forward-facing seats that prevent face-to-face contact, and ceiling-to-floor air flows that limit the circulation of respiratory droplets" the risk of transmission is reduced. North American carriers such as WestJet, Air Canada and American Airlines all planned to resume normal pattern sales on 1 July 2020. [23] This industry-driven policy garnered immediate push-back from some Canadians, including those who felt defrauded, while Minister of Transport Marc Garneau noted that the "on-board spacing requirement is a recommendation only and therefore not mandatory" while his Transport Canada department listed physical distancing as a prophylactic among the key positive points in a guide prepared for the Canadian aviation industry. [24]

In first week of March 2021, Muhammad Ali Albakri was appointed senior vice president for customer, financial and digital services at IATA replacing Aleks Popovich. [25] Due to the COVID-19 pandemic, IATA has announced its mobile app The IATA Travel Pass to be launched in mid-April 2021 to aid the travelers comply different requirements of changed flight policies of different governments. [26] [27]

IATA states that safety is its number one priority. [28] The main instrument for safety is the IATA Operational Safety Audit (IOSA). IOSA has also been mandated at the state level by several countries. In 2017, aviation posted its safest year ever, surpassing the previous record set in 2012. The new global Western-built jet accident rate became the equivalent of one accident every 7.36 million flights. [29] Future improvements will be founded on data sharing with a database fed by a multitude of sources and housed by the Global Safety Information Center. In June 2014, the IATA set up a special panel to study measures to track aircraft in flight in real time. The move was in response to the disappearance without a trace of Malaysia Airlines Flight 370 on 8 March 2014. [30]

Simplifying the Business [31] was launched in 2004. This initiative has introduced a number of crucial concepts to passenger travel, including the electronic ticket [32] and the bar coded boarding pass. Many other innovations are being established as part of the Fast Travel initiative, including a range of self-service baggage options.

An innovative program, launched in 2012 is New Distribution Capability. [33] This will replace the pre-Internet EDIFACT messaging standard that is still the basis of the global distribution system /travel agent channel and replace it with an XML standard. [34] This will enable the same choices to be offered to high street travel shoppers as are offered to those who book directly through airline websites. A filing with the US Department of Transportation brought over 400 comments. [35] [36]

IATA members and all industry stakeholders have agreed to three sequential environmental goals: [37] [38]

At the 2013 IATA annual general meeting in Cape Town, South Africa, members overwhelmingly endorsed a resolution on "Implementation of the Aviation Carbon-Neutral Growth (CNG2020) Strategy." [39] A representative for the European Federation for Transport and Environment, criticized the resolution for relying on carbon offsets instead of direct reductions in aviation carbon emissions. [39]

IATA provides consulting and training services in many areas.

A number of standards are defined under the umbrella of IATA. One of the most important is the IATA DGR [40] for the transport of dangerous goods (HAZMAT) by air.

The Airline Deregulation Act is a 1978 United States federal law that deregulated the airline industry in the United States, removing federal control over such areas as fares, routes, and market entry of new airlines. The Civil Aeronautics Board's powers of regulation were phased out, but the regulatory powers of the Federal Aviation Administration (FAA) were not diminished over all aspects of aviation safety.

Air Georgian Limited was a privately owned charter airline based at Toronto Pearson International Airport in Mississauga, Ontario, Canada. Between 2000 and 2020 its main business was its operation as Air Canada Express on a Tier III codeshare with Air Canada for scheduled services on domestic and trans-border routes. Starting in 2020 Air Georgian began focusing on air charters, before ceasing operations in May, after a sale of its assets to Pivot Airlines, a company run by the same executives.

Air Algérie SpA is the national airline of Algeria, with its head office in the Immeuble El-Djazair in Algiers. With flights operating from Houari Boumedienne Airport, Air Algérie operates scheduled international services to 39 destinations in 28 countries in Europe, North America, Africa, Asia, and the Middle East, as well as domestic services to 32 airports. As of December 2013, Air Algérie was 100% owned by the government of Algeria.

Trade Air d.o.o. is a Croatian passenger and cargo charter airline headquartered in Zagreb and based at Zagreb Airport. The company is registered as an airline whose main activities are passenger charter flights and cargo operations, organised either on charter chain flights or ad hoc flights. Trade Air also specialises in the transportation of dangerous goods.

Safair is an airline based at the O.R. Tambo International Airport in Kempton Park, South Africa. Operator of one of the world's largest fleets of civil Lockheed L-100 Hercules cargo aircraft, it also conducts aircraft chartering; leasing and sales; contract operations and leasing services; flightcrew leasing and training; aircraft maintenance and modification; aviation safety and medical training; and operations support. 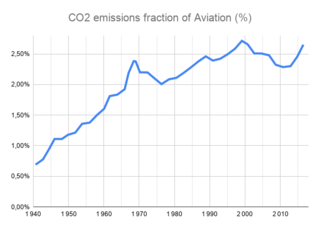 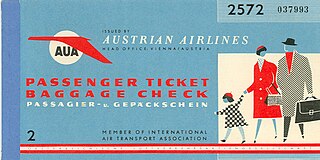 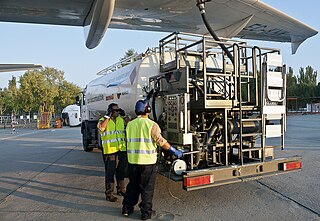 An aviation biofuel or bio-jet-fuel or bio-aviation fuel (BAF) is a biofuel used to power aircraft and is said to be a sustainable aviation fuel (SAF). The International Air Transport Association (IATA) considers it to be one of the key elements to reduce the carbon footprint within the environmental impact of aviation. Aviation biofuel could help decarbonize medium- and long-haul air travel generating most emissions, and could extend the life of older aircraft types by lowering their carbon footprint.

Africa World Airlines Limited (AWA) is a Ghanaian airline company that was incorporated in 2010 and commenced flights in 2012. It has its head office in Airport City Accra, and its main hub at Kotoka International Airport in Accra.