The International Dublin Literary Award (Irish : Duais Liteartha Idirnáisiúnta Bhaile Átha Chliath) is presented each year for a novel written or translated into English. It promotes excellence in world literature and is solely sponsored by Dublin City Council, Ireland. At €100,000, the award is one of the richest literary prizes in the world. If the winning book is a translation (as it has been nine times), the prize is divided between the writer and the translator, with the writer receiving €75,000 and the translator €25,000. [1] The first award was made in 1996 to David Malouf for his English language novel Remembering Babylon . [2]

Nominations are submitted by public libraries worldwide – over 400 library systems in 177 countries worldwide are invited to nominate books each year – from which the shortlist and the eventual winner are selected by an international panel of judges (which changes each year). The most recent winner is Emily Ruskovich who won for her novel Idaho . [3]

The prize is open to novels written in any language and by authors of any nationality, provided the work has been published in English or English translation. The presentation of the award is post-dated by two years from the date of publication. Thus, to win an award in 2017, the work must have been published in 2015. If it is an English translation, the work must have been published in its original language between two and six years before its translation. [4] The scope for inclusion has been subject to criticism; according to The Irish Times journalist Eileen Battersby, "many of the titles are already well known even at the time of the publication of the long list." [5]

Dublin City Public Libraries seek nominations from 400 public libraries from major cities across the world. Libraries can apply to be considered for inclusion in the nomination process. [6] The longlist is announced in October or November of each year, and the shortlist (up to 10 titles) is announced in March or April of the following year. The longlist and shortlist are chosen by an international panel of judges which rotates each year. Allen Weinstein was the non-voting chair of the panel from 1996 to 2003. As of 2017, the former Chief Judge of a US Court of Appeals, Eugene R. Sullivan, is the non-voting chair. [7] The winner of the award is announced each June. [4]

The award was established in 1994 as the International IMPAC Dublin Literary Award, a joint initiative of Dublin City Council and the American productivity company IMPAC, which had its European headquarters in Dublin. [8] James Irwin, president of IMPAC, established the prize money at €100,000. A trust fund was established to pay for the award and its maintenance. The award has been administered by Dublin City Public Libraries since its inception. IMPAC went defunct in the late-2000s when its founder and president James Irwin died in 2009. [8] In late 2013, the trust fund became exhausted and there was no money left to run the award. [8] The council agreed to step in and continue funding the award under the same brand name of the now-defunct company while seeking a new sponsor. [8] It was reported that the council paid €100,000 for the prize plus €80,250 in administration costs in 2015. [8] The award was subsequently renamed the International DUBLIN Literary Award in November 2015.

Describing the award as "the most eclectic and unpredictable of the literary world's annual gongs", the journalist Michelle Pauli posed the question in relation to the longlist for the 2004 edition, "Where would you find Michael Dobbs and Tony Parsons up against Umberto Eco and Milan Kundera for a €100,000 prize?" [9] 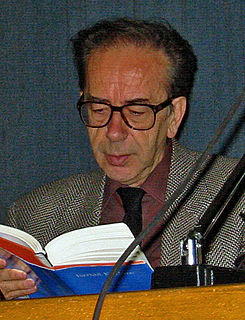 The Dylan Thomas Prize is a leading prize for young writers presented annually. The prize, named in honour of the Welsh writer and poet Dylan Thomas, brings international prestige and a remuneration of £30,000 (~$46,000). It is open to published writers in the English language under the age of forty. The prize was originally awarded bi-annually, but became an annual award in 2010. Entries for the prize are submitted by the publisher, editor, or agent; for theatre plays and screenplays, by the producer. 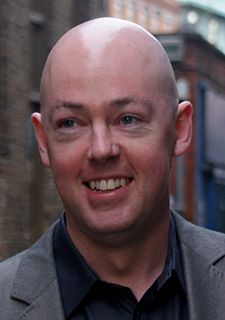 John Boyne is an Irish novelist. He is the author of eleven novels for adults and six novels for younger readers. His novels are published in over 50 languages. His 2006 novel The Boy in the Striped Pyjamas was adapted into a 2008 film of the same name.

Jon McGregor is a British novelist and short story writer. In 2002, his first novel was longlisted for the Booker Prize, making him the youngest ever contender. His second and fourth novels were longlisted for the Booker Prize in 2006 and 2017 respectively. In 2012, his third novel, Even the Dogs, was awarded the International Dublin Literary Award. The New York Times has labelled him a "wicked British writer".

The Man Asian Literary Prize was an annual literary award between 2007 and 2012, given to the best novel by an Asian writer, either written in English or translated into English, and published in the previous calendar year. It is awarded to writers who are citizens or residents of one of the following 34 Asian countries: Afghanistan, Bangladesh, Bhutan, Cambodia, China, East Timor, Hong Kong, India, Indonesia, Iran, Kazakhstan, Kyrgyzstan, Japan, Laos, Macau, Malaysia, Mongolia, Myanmar, Nepal, North Korea, Pakistan, Papua New Guinea, Philippines, Singapore, South Korea, Sri Lanka, Taiwan, Tajikistan, Thailand, The Maldives, Turkey, Turkmenistan, Uzbekistan, Vietnam. Submissions are invited through publishers who are entitled to each submit two novels by August 31 each year. Entry forms are available from May. 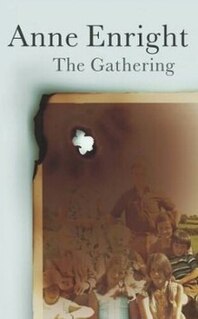 The Gathering is a 2007 novel by Irish women's fiction writer Anne Enright. It won the 2007 Booker Prize, somewhat accidentally and unexpectedly. It later emerged that Enright had denied Ian McEwan a second Booker Prize; she had simply been the compromise decision reached due to disagreements between the deciders over the merits of McEwan's On Chesil Beach.

Kevin Barry is an Irish writer. He is the author of two collections of short stories, and the novel City of Bohane, which was the winner of the 2013 International Dublin Literary Award. His 2015 novel Beatlebone won the 2015 Goldsmiths Prize and is one of seven books by Irish authors nominated for the 2017 International Dublin Literary Award, the world's most valuable annual literary fiction prize for books published in English. His 2019 novel Night Boat to Tangier was longlisted for the 2019 Booker Prize.

Michael Thomas is an American author. He won the 2009 International Dublin Literary Award for his debut novel Man Gone Down, receiving a prize of €100,000. Man Gone Down is also recommended by The New York Times.

Man Gone Down (2007) is the debut novel of U.S. author Michael Thomas. It won the 2009 International Dublin Literary Award, with Thomas receiving a prize of €100,000. Man Gone Down is also recommended by The New York Times.

The Frank O'Connor International Short Story Award—named in honour of Frank O'Connor, who devoted much of his work to the form—was an international literary award presented for the best short story collection. It was presented between 2005 and 2015. The prize amount, as of 2012 as €25,000, making it one of the richest short-story collection prizes in the world. Each year, roughly sixty books were longlisted, with either four or six books shortlisted, the ultimate decision made by three judges.

The Twin is a novel by Dutch writer Gerbrand Bakker. It won the International Dublin Literary Award in 2010, making Bakker the first Dutch writer to win the award, one of the world's richest literary awards, with a €100,000 prize. Boven is het stil was published in 2006 and its English translation, titled The Twin, followed in 2008. The novel was translated from Dutch by David Colmer. The novel's original Dutch title could be translated as "Upstairs, everything is quiet". 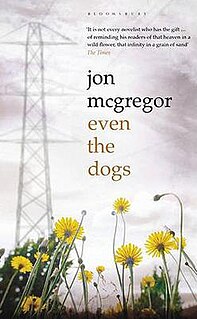 Even the Dogs is British author Jon McGregor's third novel. First published in 2010, the novel focuses on drug addiction, alcoholism, homelessness, and dereliction. The Irish Times literary critic Eileen Battersby called it a "magnificent" novel. In 2012, Even the Dogs was awarded the International Dublin Literary Award, one of the world's richest literary prizes.

City of Bohane is the debut novel by Ireland's Kevin Barry. The book is set in the year 2053, in a world with minimal technology. It received largely positive reviews and won the 2013 International Dublin Literary Award.

Donal Ryan is an Irish writer. His book The Spinning Heart was long listed for the Booker Prize in 2013 and won the Guardian First Book Award in the same year.

Reading by Lightning is the debut novel by Joan Thomas, published in 2008 by Goose Lane Editions. The novel's central character is Lily Piper, a young woman who was raised in a strict Christian fundamentalist upbringing on the Canadian Prairies, and then experienced much greater freedom for the first time in her life when she was sent to England to live with her grandmother as a teenager, but now must return home when her mother falls terminally ill.