The story follows sixth-grader Watta Takeo's life as he balances his school life, being the president of a company, and battling a robotic empire from outer space. While a Super Robot series at heart, it depicts a real world take on the genre, such as announcing to nearby citizens that Trider G7 was being activated and as having to consider the monetary expenses of battle.

Invincible Robo Trider G7 portrays the attempted invasion by the Robot Empire to take over Earth. Rebelling against this, the scientist Nabalon, who was exiled from the Empire, meets the protagonist Watta's father, and together, they design the transforming robot Trider G7. However, Watta's father dies in an accident, and Watta has no choice but to succeed him at both his job and piloting Trider. As the president of the Takeo General Company, Watta must now fight to ensure everyone's happiness, as well as the condition of the company's funds.

Watta Takeo (竹尾 ワッ太, Takeo Watta)
Voiced by: Satomi Majima
The second president of the company, called "Young President" by his subordinates as he is only in the sixth grade. Now that the first president, his father, has died, he is the only person that can utilize Trider G7. He is full of valor despite his age, and when his father died and the company was to be disbanded, he succeeded the presidency and became Trider's pilot.

Umemaru Kakikōji (柿小路 梅麻呂, Kakikōji Umemaru)
Voiced by: Ichirō Nagai
A manager 64 years of age. Whenever Watta or one of the directors fires any missiles, he immediately begins calculating how much it will cost.

Tetsuo Atsui (厚井 鉄男, Atsui Tetsuo)
Voiced by: Yuzuru Fujimoto
A director, and the only mechanic; he can do everything from repairing Trider to fixing an air conditioner. He pilots the Shuttle and provides support for Watta. He has no wife or children, but he adopts a foster son named Ryuusuke during the anime.

Tōhachirou Kinoshita (木下 藤八郎, Kinoshita Tōhachirou)
Voiced by: Aidoki Yamamoto
A subsection chief, but he doesn't actually get much work due to the company's structure. He is frivolous, yet also the life of the party, and other characters find it impossible to hate him.

Nabalon (ナバロン, Nabaron)
Trider G7's designer, and a scientist who defected to Earth from the Robot Empire.

Trider G7 (トライダーG7, Trider G7)
The titular robot of the series, piloted by Watta Takeo. It stands at 57 meters tall and weighs 777 tons. It hosts a variety of weapons, including the Trider Saber and the Trider Beam Cannon. It is able to transform into six distinct states, each one useful for a different terrain, such as space, land, sky, and water.

Shuttle (シャトル, Shuttle)
A support shuttle for the Trider G7 that first appears in episode 27. Kakikouji, Tetsuo, Touhachirou, and Sunabara all pilot it. Its main armament is a pair of missile launchers.

Up until now, the series airing on TV Asahi in this timeslot had their soundtracks composed by Takeo Watanabe and Yuushi Matsuyama, but the two were busy working on the soundtrack for the theatrical adaptation of Mobile Suit Gundam, so Kurando Kaya filled in the role.

Rather than depicting robots as a military weapon like Mobile Suit Gundam did, the aim of the story was to portray the real world. Trider G7's own unrealistic abilities are explained with scientists that were exiled from the enemy empire, as Trider G7's capabilities are far beyond that of the other Earth-made robots in the show.

As with other super robot shows, Invincible Robo Trider G7 is generally a story of Trider G7's battle with the alien Robot Empire, but its main drama derived from the protagonist, Watta, interacting with many normal, working-class citizens and showing the human kindness that they possess. The enemy Robot Empire is never explained to be anything more than "strange, mysterious robots bent on taking over Earth". Each time the Robot Empire attacks, Trider G7 is launched in order to intercept them, and through various coincidences, the Robot Empire fails again and again while attempting to figure out what Trider G7 exactly is. In the last episode, the Robot Empire finally abandons their quest to take over Earth. This all results in a unique story structure where neither the good guys nor the bad guys have any interaction with the other side. The only real time contact between them occurs is between the protagonists and the exiled scientist Nabalon, who built Trider G7, but the only ones who actually know of Nabalon's true identity are the protagonist Watta, Watta's late father, and Clard, an engineer for the Robot Empire - none of the other major characters ever find out about this.

The series ended without a single fight in the final episode, but rather Watta's elementary school graduation ceremony. There were episodes that focus not on the war, but on Watta's school life, such as him having a cavity filled during a physical examination, and him going on a field trip with his class. These scenes hold as much excitement as his battles in Trider G7.

Invincible Robo Trider G7 aired from February 2, 1980 until January 24, 1981, spanning 50 episodes. It was also broadcast in Italy in 1981 under the name L'Indistruttibile Robot Trider G7. As with most super robot shows of the time, toys of the titular robot were produced. None of them could ever perfectly replicate its unique seven states of transformation, however.

The term mecha may refer to both scientific ideas and science fiction genres that center on giant robots or machines (mechs) controlled by people. Mechas are typically depicted as humanoid mobile robots. The term was first used in Japanese (meka) after shortening the English loanword mekanikaru ('mechanical'), but the meaning in Japanese is more inclusive, and "robot" (robotto) or "giant robot" is the narrower term. 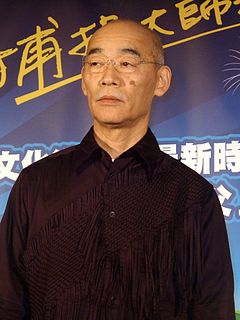 Yoshiyuki Tomino is a Japanese mecha anime creator, animator, songwriter, director, screenwriter and novelist. He was born in Odawara, Kanagawa Prefecture, and studied at Nihon University's College of Art. He is best known for creating the Gundam anime franchise.

Super Robot Wars is a series of tactical role-playing video games produced by Banpresto, which is now a Japanese division of Bandai Namco Entertainment. Starting out as a spinoff of the Compati Hero Series, the main feature of the franchise is having a story that crosses over several popular mecha anime, manga and video games, allowing characters and mecha from different titles to team up or battle one another. The first game in the franchise was released for the Nintendo Game Boy on April 20, 1991. Later spawning numerous games that were released on various consoles and handhelds. Due to the nature of crossover games and licensing involved, only a few games have been released outside Japan, and in English. The franchise celebrated its 25th anniversary in 2016.

Super Robot Wars GC is the first and only Nintendo GameCube Super Robot Wars title. The basic premise of the game is that the plot, settings, characters, and other mechanics consist of essentially mixing and combining the like of Gundam, Mazinger, Getter Robo, Zettai Muteki Raijin-Oh, and many other mecha-based anime and manga series into one universe. The Super Robot Wars series has existed for a fairly long time, dating back to the Nintendo Game Boy, and has had many releases since then, across possibly all of the mainstream platforms since then, including the SNES, PS, PS2, GameCube, Game Boy and later iterations, among other platforms. It was ported to the Xbox 360 under the title Super Robot Wars XO, which had an online mode called Super Robot Competition.

Another Century's Episode, abbreviated as A.C.E., is a mecha action video game developed by FromSoftware and published by Banpresto. It was released for the PlayStation 2 in Japan on January 27, 2005. 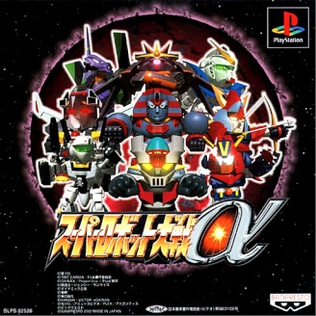 Sotsu Co., Ltd. is a Japanese advertising agency. It has substantial relations with Bandai Namco Holdings and especially with its subsidiary, Sunrise. 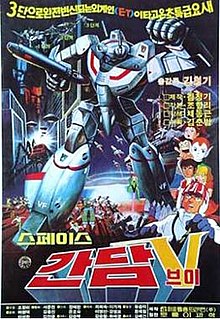 Space Gundam V is a South Korean animated film directed by Kim Cheong-gi, released on July 1983. Despite its title, the series is not related to Mobile Suit Gundam. It is known for incorporating an unlicensed version of the VF-1J Valkyrie of Macross fame and the heroic elements of Brave Raideen.

Super Robot Wars T is a tactical role-playing game developed by B.B. Studio and published by Bandai Namco Entertainment. It is the eleventh standalone entry to the Super Robot Wars series and the third installment of the "International Era" series, with the game's continued focus on the massive crossover between different mecha anime series released in Japan. Released for the PlayStation 4 and Nintendo Switch, It was released in Asia on March 20, 2019.