Konarak (Persian : کنارک‎) is a Hendijan-class support vessel of the Iranian Navy. It was built in the Netherlands and has been in service since 1988. Originally intended as a support and logistics ship, Konarak was overhauled in 2018, and was armed with anti-ship missiles. The vessel was struck by a missile fired from the Iranian frigate Jamaran in a friendly fire incident during training on 10 May 2020, killing 19 sailors.

Konarak was built in 1988, at the K. Damen Shipyards, in Boven-Hardinxveld, the Netherlands, as hull number 1403. [1] [2] It was ordered and purchased before the 1979 Iranian Revolution. [3] The twelve Hendijan-classsupport vessels were constructed in the 1980s and 1990s, six of them at the K. Damen Shipyards, and the remainder under contract in Iran. Questions were raised in the Dutch parliament over the delivery of the ships during the 1980–1988 Iran–Iraq War but as the ships were unarmed and not combatant vessels, an export license was not necessary. [4] The Netherlands also delivered a tug and a water tanker to the Iranian Navy during this period. [1] [5] Konarak has been in service since 1988. [6]

Ships of the Hendijan class have been used as support vessels and in logistics roles. In recent years they have been repurposed as combatant vessels with anti-shipping weapons installed. [1] [8] Konarak was overhauled in 2018 and was given missile-launch capability and could be used to lay mines. [6] [2] Konarak had no anti-missile weaponry, though it may have had a 20 mm (0.79 in) Oerlikon cannon and four Nasr-1 anti-ship missiles. [1] [2] [7] It joined the Iranian naval force based at the city of Konarak on 7 October 2018. [2]

On 10 May 2020, the ship was struck by a Noor missile fired from the Iranian frigate Jamaran when in the Strait of Hormuz. [9] Official Iranian TV initially reported one fatality in the incident, [10] but this was later revised to 19 killed and 15 injured. Konarak was involved as a tender, setting out targets for target practice for missiles from Jamaran. Konarak reportedly failed to distance itself sufficiently from the target prior to the launch and was struck by a missile. [3] The missile may have automatically locked onto Konarak as the largest target or else been set as the target by human error. [10] After the incident, Konarak was towed to port in order to undergo a technical inspection. Footage published by the Iranian state broadcaster IRIB showed the ship down heavily by the bow [11] with its superstructure devastated and smoke visible from fires. [3]

The Oliver Hazard Perry class is a class of guided-missile frigates named after the U.S. Commodore Oliver Hazard Perry, the hero of the naval Battle of Lake Erie. Also known as the Perry or FFG-7 class, the warships were designed in the United States in the mid-1970s as general-purpose escort vessels inexpensive enough to be bought in large numbers to replace World War II-era destroyers and complement 1960s-era Knox-class frigates. In Admiral Elmo Zumwalt's "high low fleet plan", the FFG-7s were the low capability ships with the Spruance-class destroyers serving as the high capability ships. Intended to protect amphibious landing forces, supply and replenishment groups, and merchant convoys from aircraft and submarines, they were also later part of battleship-centred surface action groups and aircraft carrier battle groups/strike groups. Fifty-five ships were built in the United States: 51 for the United States Navy and four for the Royal Australian Navy (RAN). In addition, eight were built in Taiwan, six in Spain, and two in Australia for their navies. Former U.S. Navy warships of this class have been sold or donated to the navies of Bahrain, Egypt, Poland, Pakistan, Taiwan, and Turkey. 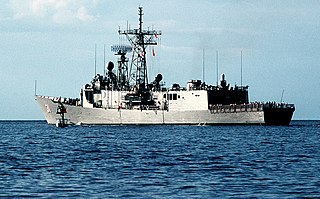 The Exocet is a French-built anti-ship missile whose various versions can be launched from surface vessels, submarines, helicopters and fixed-wing aircraft. The Exocet saw its first wartime launch during the Falklands War.

Sea Dart or GWS30 was a British naval surface-to-air missile system designed by Hawker Siddeley Dynamics in the 1960s, entering service in 1973. It was fitted to the Type 42 destroyers, Type 82 destroyer and Invincible-class aircraft carriers of the Royal Navy. Originally developed by Hawker Siddeley, the missile was built by British Aerospace after 1977, and was withdrawn from service in 2012. 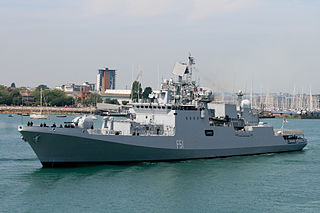 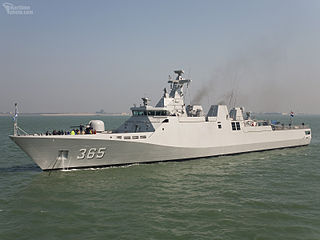 The Sigma class is a Dutch-built family of modular naval vessels, of either corvette or frigate size, designed by Damen Group.

The Iranian Navy traditionally located in the shallow waters of the Persian Gulf, has always been the smallest of the country's military forces. An Iranian navy in one form or another has existed since Achaemenid times in 500 BC. The Phoenician navy played an important role in the military efforts of the Persians in late antiquity in protecting and expanding trade routes along the Persian Gulf and Indian Ocean. With the Pahlavi dynasty in the 20th century that Iran began to consider building a strong navy to project its strength into the Persian Gulf and Indian Ocean. In more recent years, the country has engaged in domestic ship building industries in response to the western-backed Iraqi invasion of Iran, which left it without suppliers during an invasion.

The Modge-class frigate also spelled Moje class, is a class of domestically produced Iranian light frigates. It appears to be a development of the Alvand-class design. They are described as destroyers by the Iranian state media but the size and weight of the ships; 1,500 ton displacement, are more in keeping with that of modern corvettes. The ships are also referred to as destroyer escorts.

The Holland-class offshore patrol vessels are a class of four offshore patrol vessels constructed for the Royal Netherlands Navy. They are designed to fulfill patrol and intervention tasks against lightly armed opponents, such as pirates and smugglers, but have much higher level electronic and radar surveillance capabilities which are used for military stabilization and security roles, short of outright war. Without sonar or long range weapons, they utilize the surveillance capabilities of the Thales integrated mast, which integrates communication systems and two 4-faced phased arrays for air and surface search. 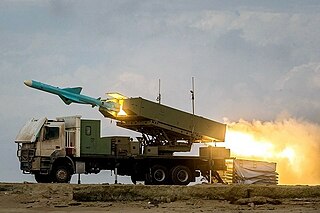 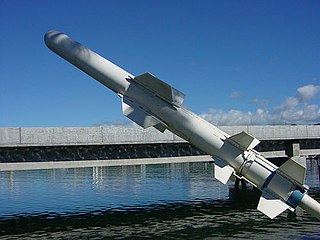 The Harpoon is an all-weather, over-the-horizon, anti-ship missile, developed and manufactured by McDonnell Douglas. The Standoff Land Attack Missile (SLAM) is a land-attack variant. 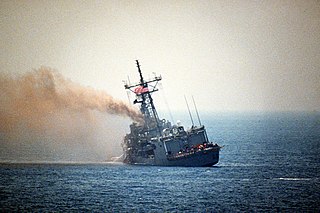 The USS Stark incident occurred during the Iran–Iraq War on 17 May 1987, when an Iraqi jet aircraft fired two missiles at the American frigate USS Stark. A total of thirty-seven United States Navy personnel were killed or later died as a result of the attack, and twenty-one were injured.

Sahand, also known as Moudge 5, is an Iranian designed frigate of the Moudge class launched November 2012. The vessel is able to fire and can be equipped with latest Iranian anti-ship missiles. The warship added to Iran’s arsenal to ensure security in the Strait of Hormuz.

Jamaran is the lead ship of the Iranian Moudge-class frigate launched in early 2010 in Bandar-e-Abbas, Iran. Iran has stated that the design and building of Jamaran was among the greatest achievements of the Iranian Navy and the ship's launch marks a major technological leap for Iran's naval industries. More ships in its class are under construction to be added to the Iranian fleets in the Caspian Sea and the Persian Gulf. The ship is designed for a crew of 140. Jamaran combines anti-submarine assets with other systems of weapons capable of dealing with surface and air threats as well.

Damavand, also known as Jamaran-2 and Velayat (ولایت), was the second ship of the Iranian Moudge class of frigates. The class appeared to be a development of the Alvand class. It was named Damavand after inauguration in the Caspian Sea. She sank on 28 January 2018, after hitting the breakwater at Bandar-e Anzali on 10 January.

The Konarak vessel incident was a friendly fire incident in the Islamic Republic of Iran Navy on 10 May 2020 where an anti-ship missile fired from the Iranian frigate Jamaran hit the support vessel Konarak. The incident happened during a war game of the Iranian Navy in the Gulf of Oman. During this incident, 19 crew of the Konarak were killed with 15 wounded. The Konarak was heavily damaged and its wreckage towed to Chabahar Port.