The Irish Museum of Modern Art (Irish : Áras Nua-Ealaíne na hÉireann) also known as IMMA, is Ireland's leading national institution for the collection and presentation of modern and contemporary art. Located in Kilmainham, Dublin, the Museum presents a wide variety of art in a changing programme of exhibitions, which regularly includes bodies of work from its own collection and its education and community department. It also aims to create more widespread access to art and artists through its studio and national programmes.

The Museum’s mission is to foster within society an awareness, understanding and involvement in the visual arts through policies and programmes which are excellent, innovative and inclusive.

Irish art collector Gordon Lambert met with Taoiseach Charles J Haughey and "told him if the State would establish a gallery he would donate his collection." [1] The Irish Museum of Modern Art was established by the Government of Ireland in 1990. It was officially opened on 25 May 1991 by Haughey. [2]

Its first Director was Declan McGonagle, who served for 10 years. He was followed by Enrique Juncosa, and then Sarah Glennie. [1] [3] Annie Fletcher has been Director since 2018. [4]

The Irish Museum of Modern Art is housed in the 17th-century Royal Hospital Kilmainham. The Royal Hospital was founded in 1684 by James Butler, the Duke of Ormonde and Viceroy to Charles II, as a home for retired soldiers and continued in that use for almost 250 years.

The Royal Hospital is a striking location for displaying modern art. Modelled on Les Invalides in Paris, it is arranged around a courtyard and the interior has long corridors running along series of modest interlocking rooms. The original stables have been restored, extended and converted into artists' studios, and the museum runs an artist-in-residence programme.

Originally there was another option to build a new purpose-built museum in Dublin's docklands, but the Hospital proved to be the more pragmatic choice at the time, however "over the years... the lack of a large exhibition space has on occasion been a drawback." [5] Additionally, the Royal Hospital lacked adequate storage and by 2003 up to 20 national and international works were discovered to be badly damaged by "humidity and temperature fluctuations". [6] The Office of Public Works assisted in finding and relocating the bulk of the collection in off-site warehouses, and even a storage container in the museum's car park. [7]

The Hennessy Art Fund for IMMA Collection was launched in 2016 in part as a response to funding cuts preventing the museum from having a viable acquisitions budget to collect the work of emerging and mid-career artists since 2011. The fund is a new multi-year corporate partnership and acquisition fund to purchase works by Irish and Irish based artists that are not yet part of the IMMA National Collection of Contemporary and Modern Art. [10] Prior to this the museum relied heavily on private philanthropy. [11] The Hennessy Art Fund has thus far allowed the collection to acquire the work of Kevin Atherton, David Beattie, Rhona Byrne and Dennis McNulty in 2016; and Ciarán Murphy, Maireád McClean, Mark Garry and Yuri Pattison in 2017. [12]

The Museum is a company limited by guarantee and not having a share capital. The company is funded by grant-in-aid through the Department of Tourism, Culture, Arts, Gaeltacht, Sport and Media and by sponsorship, franchise and own resource income. 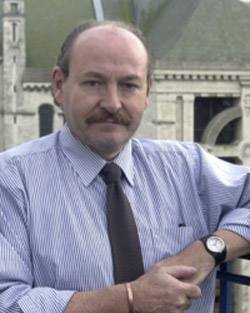 Declan McGonagle is a well-known figure in Irish contemporary art, holding positions as director at the Orchard Gallery in Derry, the first director at the Irish Museum of Modern Art, and as director of the National College of Art and Design, Dublin. He writes, lectures and publishes regularly on art and museum/gallery policy issues, and curates exhibitions.

Events from the year 1991 in Ireland.

Mary Harriet "Mainie" Jellett was an Irish painter whose Decoration (1923) was among the first abstract paintings shown in Ireland when it was exhibited at the Society of Dublin Painters Group Show in 1923. She was a strong promoter and defender of modern art in her country and her artworks are present in museums in Ireland. Her work was also part of the painting event in the art competition at the 1928 Summer Olympics.

Alice Maher is a contemporary Irish artist working in a variety of media, including sculpture, photography and installation.

The Artist Pension Trust (APT), which merged into the MutualArt Group in 2016, is an investment vehicle specializing in contemporary art, which aims to provide financial security and international exposure to selected artists chosen by its international curatorial team. It has the largest global collection of contemporary art, comprising 10,000 artworks from 2,000 artists in 75 countries, and growing by more than 2,000 each year. As of November 2013, a total of 40,000 artworks had been committed to APT by 2,000 artists. APT claimed its then value to be more than $US100 million.

Timothy Drever Robinson was an English writer, artist and cartographer. His most famous works include books about Ireland's Aran Islands and Connemara, in the West of Ireland. He was also well known for producing exceptionally detailed maps of the Aran Islands, The Burren, and Connemara, what he called "the ABC of earth wonders". 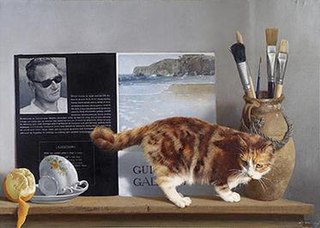 Patrick Anthony Hennessy RHA was an Irish realist painter. He was known for his highly finished still lifes, landscapes and trompe l'oeil paintings. The hallmark of his style was his carefully observed realism and his highly finished surfaces, the result of a virtuoso painting technique. He was brought up in Arbroath by his mother and step-father, his father having been killed during World War One. He attended Dundee School of Art where he met his lifelong companion, the painter Henry(Harry)Robertson Craig. Two of his paintings were accepted in 1939 at the Royal Scottish Academy for their Annual Exhibition. For the next 29 years he lived in Ireland with extended trips abroad. He was elected a member of the Royal Hibernian Academy in 1949. The Hendriks Gallery in Dublin and the Guildhall Galleries in Chicago were the main outlets for his work. In the late 1960s he moved permanently to Tangier and then, after suffering ill health, to the Algarve. He died in London.

Hannah Starkey is a British photographer who specializes in staged settings of women in city environments, based in London. In 2019 she was awarded an Honorary Fellowship of the Royal Photographic Society.

Helen O'Leary is an Irish-born artist based in the United States and Ireland, who is best known for constructions that blur the boundaries between painting and sculpture and object and image. Her mature work uses bricolage and handicraft approaches to refashion older works, studio castoffs and diverse materials into abstract pieces that explore materials, language, physical remnants of the past, and the visual, cultural and emotional influences of origin. She has exhibited extensively in Ireland, the United States, and internationally, including shows at the Irish Museum of Modern Art (IMMA), Metropolitan Arts Centre (MAC) (Belfast), American Academy of Arts and Letters, SFMOMA, the Sanskriti Foundation, Victorian College of the Arts (Melbourne), and Centre Culturel Irlandais (Paris). Her work has been recognized by the John S. Guggenheim Foundation, American Academy in Rome, Pollock-Krasner and Joan Mitchell foundations, with numerous residencies, and reviews in The Times (UK), The New York Times, Chicago Tribune, The Irish Times, Arts Magazine, and Huffington Post, among others.

Jaki Irvine is an Irish contemporary visual artist, specialising in music and video installations, and a novelist. She shares time between Dublin and Mexico City.

Rosc was a series of international modern art exhibitions held in Dublin, Ireland approximately every 4 years between 1967 and 1988. 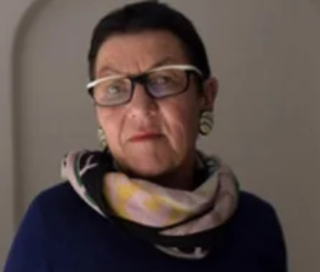 Janet Mullarney was an Irish artist and sculptor.

Nicola López (1975) is an American contemporary artist known for her drawings, prints, installations and collages.

Pauline Cummins is an Irish sculptor, painter, performance and video artist. She is a lecturer at the National College of Art and Design.