Irving Gould (1919–2004) was a Canadian businessperson credited with both saving and sinking Commodore.

Commodore was originally formed in Canada and initially produced mechanical typewriters and calculators. In 1965, Jack Tramiel, Commodore's founder and CEO, decided to purchase the Canadian store chain Wilson's Stationers to provide a sales channel for their products. To fund the purchase they borrowed $3 million from Atlantic Acceptance Corporation at an 11% interest rate. On 14 June 1965, Atlantic bounced a $5 million check and was insolvent within days. This led to all their capital loans being called in, including Commodore's $3 million. [1]

Looking for a way out of the problem, Irving Gould arranged the sale of Wilson's Stationers to a US company. To pay off the bridge loan, Gould purchased 18% of Commodore's stock for $500,00. Over the next decade, the company repeatedly had difficulties and repeatedly turned to Gould for funding. [1]

Through the late 1960s and early 1970s, Japanese companies began introducing typewriters and calculators at price points Commodore could not match. Tramiel responded by moving into the newly emerging field of electronic calculators. [1] Irving had a Japanese girlfriend and kept up on changes in Japanese industry. In the mid-1970s, Irving told Jack Tramiel that the Japanese were starting to produce calculators using CMOS electronics that were going to "kick your butt." [2] Tramiel visited Japan to examine their systems, and found they would not sell their technology to the US. [3]

The Japanese companies were able to undercut Commodore both in technology and by being vertically integrated. Texas Instruments, one of Commodore's suppliers, decided to follow this pattern and introduced complete calculators at prices below what they sold the parts to Commodore. Gould provided funding to keep Commodore going during the period where they were being forced out of the calculator business. Tramiel responded by buying MOS Technology to supply microprocessors and moving into the computer market. [4]

Gould and Mehdi Ali (then Commodore's Managing Director) have also been accused of causing the death of Commodore in 1993–94 by making a series of mistakes like trying to maximize profit by producing low cost equipment and mismarketing the Amiga. [5] 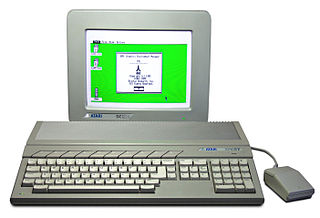 The Atari ST is a line of home computers from Atari Corporation and the successor to the Atari 8-bit family. The initial ST model, the 520ST, saw limited release in April–June 1985 and was widely available in July. The Atari ST is the first personal computer to come with a bitmapped color GUI, using a version of Digital Research's GEM released in February 1985. The 1040ST, released in 1986, is the first personal computer to ship with a megabyte of RAM in the base configuration and also the first with a cost-per-kilobyte of less than US$1. 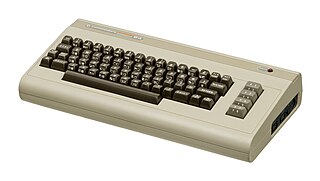 Commodore International was an American home computer and electronics manufacturer founded by Jack Tramiel. Commodore International (CI), along with its subsidiary Commodore Business Machines (CBM), participated in the development of the home–personal computer industry in the 1970s and 1980s. The company developed and marketed the world's best-selling desktop computer, the Commodore 64 (1982), and released its Amiga computer line in July 1985. With quarterly sales ending 1983 of $49 million, Commodore was one of the world's largest personal computer manufacturers.

MOS Technology, Inc., later known as CSG , was a semiconductor design and fabrication company based in Norristown, Pennsylvania, in the United States. It is most famous for its 6502 microprocessor and various designs for Commodore International's range of home computers.

The Atari 8-bit family is a series of 8-bit home computers introduced by Atari, Inc. in 1979 and manufactured until 1992. All of the machines in the family are technically similar and differ primarily in packaging. They are based on the MOS Technology 6502 CPU running at 1.79 MHz, and were the first home computers designed with custom co-processor chips. This architecture enabled graphics and sound capabilities more advanced than most contemporary machines, and gaming on the platform was a major draw. The first-person space combat simulator Star Raiders is considered the platform's killer app. The systems launched with a series of plug and play peripherals that used the Atari SIO serial bus system, an early analog of USB.

Jack Tramiel was a Polish American businessman, best known for founding Commodore International. The Commodore PET, Commodore VIC-20 and Commodore 64 are some home computers produced while he was running the company. Tramiel later formed Atari Corporation after he purchased the remnants of the original Atari, Inc. from its parent company. 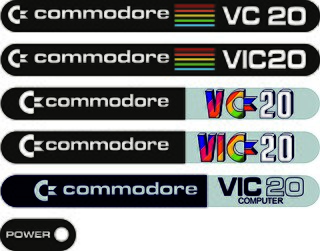 The VIC-20 is an 8-bit home computer that was sold by Commodore Business Machines. The VIC-20 was announced in 1980, roughly three years after Commodore's first personal computer, the PET. The VIC-20 was the first computer of any description to sell one million units. It was described as "one of the first anti-spectatorial, non-esoteric computers by design...no longer relegated to hobbyist/enthusiasts or those with money, the computer Commodore developed was the computer of the future." 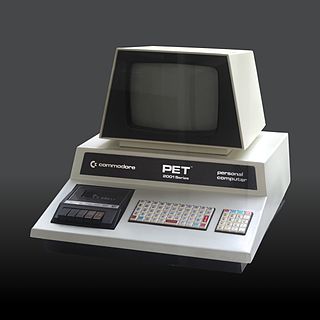 The Commodore PET is a line of home/personal computers produced starting in 1977 by Commodore International. A top-seller in the Canadian and United States educational markets, it was the first personal computer sold to the public and formed the basis for their entire 8-bit product line, including the Commodore 64. The first model, which was named the PET 2001, was presented to the public at the Winter Consumer Electronics Show in 1977. The name was suggested by Andre Souson after he saw the Pet Rock in Los Gatos, and stated they were going to make the "pet computer". 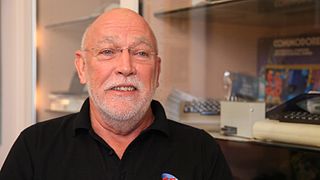 William (Bill) David Mensch, Jr., is an American electrical engineer born in Quakertown, Pennsylvania. He was a major contributor to the design of the Motorola 6800 8-bit microprocessor, was part of the small team led by Chuck Peddle that created the MOS Technology 6502, and he designed the 16-bit successor to the 6502, the 65816.

Sirius Systems Technology was a personal computer manufacturer in Scotts Valley, California. It was founded in 1980 by Chuck Peddle and Chris Fish, formerly of MOS Technology and capitalized by Walter Kidde Inc. In late 1982 Sirius acquired Victor Business Systems from Kidde and changed its name to Victor Technologies. It made the Victor/Sirius series of personal computers. The company made a public stock offering in the first half of 1983, but went into Chapter 11 protection from bankruptcy before the end of 1984. The company's assets were acquired by Datatronic AB, a Swedish software/hardware distribution company headed by Mats Gabrielsson. Gabrielsson signed a distribution deal with Kyocera, which began to supply PC clones to Victor.

Smith Corona is a US manufacturer of thermal labels, direct thermal labels, and thermal ribbons used in warehouses for primarily barcode labels. Once a large U.S. typewriter and mechanical calculator manufacturer, it expanded aggressively during the 1960s to become a broad-based industrial conglomerate whose products extended to paints, foods, and paper. The mechanical calculator sector was wiped out in the early 1970s by the production of cheap electronic calculators, and the typewriter business collapsed in the mid-1980s due to the introduction of PC-based word processing.

Atari Corporation was an American manufacturer of computers and video game consoles from 1984 to 1996. Atari Corp. was founded in July 1984 when Warner Communications sold the home computing and game console divisions of Atari, Inc. to Jack Tramiel. Its chief products were the Atari ST, Atari XE, Atari 7800, Atari Lynx and Atari Jaguar.

Amiga Corporation was a United States computer company formed in the early 1980s as Hi-Toro. It is most famous for having developed the Amiga computer, code named Lorraine. 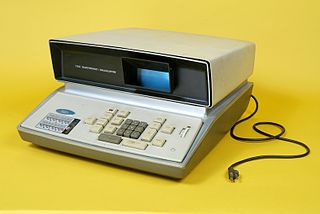 Friden Calculating Machine Company was an American manufacturer of typewriters and mechanical, later electronic calculators. It was founded by Carl Friden in San Leandro, California, in 1934. Friden electromechanical calculators were robust and popular.

Michael S. Tomczyk was responsible for guiding the development and launch of the Commodore VIC-20, the first microcomputer to sell one million units; and for his early role as a pioneer in telecomputing. The VIC-20 was the first affordable, full-featured color computer and the first home computer to be sold in KMart and other mass market outlets. He has been called the "marketing father" of the home computer.