Born in Bacup, Lancashire, he was the fourth son of Joshua Hoyle. His father was the founder of Joshua Hoyle and Sons Ltd, cotton manufacturers of Summerseat near Bury. He was educated at Crosbie House, Frodsham, before entering the textile business. [1] He eventually became a director of the family company, and was credited with making the firm a model of good industrial relations. [2]

Politically, Hoyle was a pro-Home Rule Liberal. [2] In 1885 he was elected as Member of Parliament for Heywood, retiring at 1892 general election. He was a magistrate for the City of Manchester and a director of the Manchester Chamber of Commerce. [1]

Sir Isaac Holden, 1st Baronet was an inventor and manufacturer, who is known both for his work in developing the Square Motion wool-combing machine and as a Radical Liberal Member of Parliament. 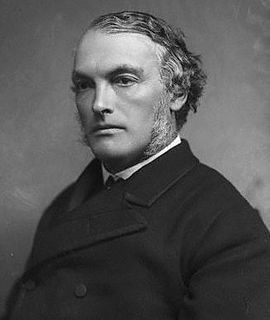 William Glynne Charles Gladstone was a Liberal Party politician in the United Kingdom, and the last of four generations of Gladstones to serve in the House of Commons, the first being his great-grandfather Sir John Gladstone(s) (1764–1851). His body was the last to be officially repatriated to the United Kingdom during the First World War.

John Slagg (junior) was a British businessman and Liberal politician.

Charles Hayward Izard was a Liberal Party Member of Parliament in New Zealand, and a Wellington lawyer.

Richard Spooner was a British businessman and politician. In his youth he was a Radical reformer, but in later life he moved to the political right to become an Ultra-Tory.

Robert Needham PhilipsDL was an English merchant and manufacturer in the Lancashire textiles business, a Liberal Party politician, and the grandfather of the Whig historian G. M. Trevelyan.

Eli DuBose Hoyle was a brigadier general in the United States Army. He is most noted for his command of the port of embarkation at Governor's Island in New York Harbor during World War I, for which he received the Distinguished Service Medal and Soldier's Medal.

Henry Lee was a Manchester cotton manufacturer and Liberal Party politician who sat in the House of Commons from 1880 to 1885.

David Chadwick was an English accountant and Liberal Party politician. He sat in the House of Commons from 1868 to 1880.

The South Somerset by-election, 1911 was the second Parliamentary by-election for that constituency of 1885 to 1918. The seat was one of seven county seats in Somerset, England which had four other, urban members until 1918.