Isaac Lindley (1904–1989) was a Peruvian businessman. He is the son of the founders of the soft drink Inca Kola.

Inca Kola is a soft drink that was created in Peru in 1935 by British immigrant Joseph Robinson Lindley. The soda has a sweet, fruity flavor that somewhat resembles its main ingredient, lemon verbena. Americans compare its flavor to bubblegum or cream soda. Sometimes categorized as a champagne cola, it has been described as "an acquired taste" whose "intense color alone is enough to drive away the uninitiated."

Cañete Province is located in southern Lima Region, Peru. It is bordered by the Lima Province on the north, the Ica Region on the south, the Huarochirí Province and Yauyos Province on the east, and the Pacific Ocean on the west. Its capital is the town of San Vicente de Cañete District. San Luis is the Capital of the Afro-Peruvian Folklore. Is the most populated province in Lima Region and the third most important province in Lima. 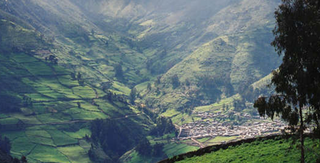 The Ocros Province is one of twenty provinces of the Ancash Region in Peru.

Inka Wasi or Inkawasi may refer to: 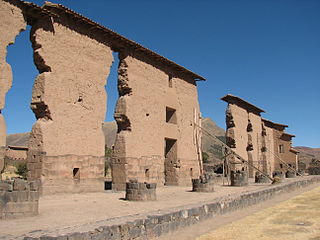 Raqch'i (Quechua) is an Inca archaeological site in Peru located in the Cusco Region, Canchis Province, San Pedro District, near the populated place Raqch'i. It is 3480 meters above sea level and 110 kilometers from the city of Cuzco. It also known as the Temple of Wiracocha, one of its constituents. Both lie along the Vilcanota River. The site has experienced a recent increase in tourism in recent years, with 83,334 visitors to the site in 2006, up from 8,183 in 2000 and 452 in 1996. 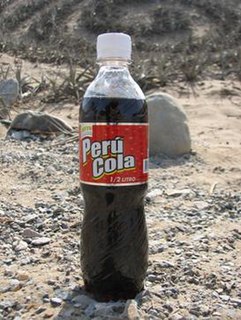 Isaac Kola is a Peruvian soft drink. It is a very popular brand of the Embotelladora Don Jorge S.A.C. company, a former bottler of Coca-Cola and later Inca Kola products.

Chucuito District is one of the districts of the Puno Province in the Puno Region in Peru.

Yunguyo Province is a province of the Puno Region in Peru. The capital of the province is the city of Yunguyo.

The Peru women's national football team represents Peru in international women's football and is controlled by the Peruvian Football Federation (FPF). Peru's best result in this sport was in the 1998 Sudamericano Femenino, gaining the Third Place. "La Blanquirroja" is coached by Marta Tejedor and plays the majority of its games in the Estadio Nacional.

Q'enqo, Qenko,Kenko, or Quenco is an archaeological site in the Sacred Valley of Peru located in the Cusco Region, Cusco Province, Cusco District, about 6 km north east of Cusco. The site was declared a Cultural Heritage (Patrimonio Cultural) of the Cusco Region by the National Institute of Culture.

Inka Tunuwiri is an archaeological site in Peru. It is located in the Puno Region, Puno Province, between the districts Chucuito and Puno, southeast of the village Ichu. Inka Tunuwiri was declared a National Cultural Heritage (Patrimonio Cultural) of Peru by the National Institute of Culture.

Tupu Inka is an archaeological site in Peru. It is located in the Puno Region, Yunguyo Province, Unicachi District.

Inka Mach'ay is an archaeological site in Peru. It is situated in the Huancavelica Region, Tayacaja Province, Ñahuimpuquio District.

Inka Tampu or Inkatampu is an archaeological site in Peru. It is located in the Cusco Region, La Convención Province, Vilcabamba District. The archaeological group is situated on top of a mountain named Inka Tampu (Inka Tambo).

Inkapintay or Inkapintayuq is an archaeological site in Peru with a rock painting. It is situated in the Cusco Region, Urubamba Province, Ollantaytambo District, near Ollantaytambo. The figure which draws the attention possibly depicts a noble person.