Sir Isaac Wolfson, 1st Baronet FRS [1] ( /ˈwʊlfsən/ ; 17 September 1897 – 20 June 1991) was a Scottish businessman and philanthropist. He was managing director of Great Universal Stores (G.U.S. or Gussies) 1932–1947 and chairman 1947–1987. He established the Wolfson Foundation to distribute most of his fortune to good causes. Great Universal Stores was a mail order business. He joined the company as a merchandising controller in 1932, becoming joint managing director in the same year. The company was in trouble when he joined but he turned it round and made it into a very strong business and the principal source of his wealth. He also had other successful business ventures. He was succeeded by his son Leonard Wolfson. [2]

Isaac Wolfson was the son of a Jewish cabinet maker, Solomon Wolfson, an immigrant from Rajgród, Poland [3] [4] who settled in the Gorbals in Glasgow, Scotland. His mother was Nechi Surah Wilamowski. He was educated at Queen's Park School, Glasgow.

He was highly capable in mathematics but could not afford to train as an accountant so he became a salesman for his father, who made cheap tables and chairs for local people. He is said to have been a brilliant salesman. At this time he made many business friends who worked with him ever afterwards. [2]

In 1920 he left for London. There he started his own business, selling clocks, mirrors and upholstery. In 1926 he married Edith Specterman. His father-in-law owned a chain of suburban cinemas and helped him financially in his early days. [2]

In 1930 he was exhibiting at a trade fair in Manchester City Hall. George Rose was then a director of Great Universal Stores, only just renamed from mere Universal Stores. Rose liked Wolfson's display and ordered 500 clocks, which for Wolfson at the time was a big order. Rose took Wolfson to lunch and showed him the G.U.S. Devonshire Street factory. Soon Wolfson was G.U.S.'s chief buyer but he retained his own business and from G.U.S. took profit share and share options in lieu of salary. [2]

Universal Stores was founded in 1900 by Abraham, George and Jack Rose. The company developed a mail-order trade, sending out small (by later standards) catalogues. In 1931, just after Wolfson joined, it went public but got into serious trouble and the shares plummeted. There were a number of reasons: financial inexperience, an ill-advised move from Manchester to London, a fire and the recession. These troubles hastened the death of Abraham, who was already a sick man. [2]

Wolfson gradually acquired shares from the Rose brothers, using cash lent by his father-in-law and by Archibald Mitchelson, who was a friend. In 1932, he became joint Managing Director with George and in 1934 sole Managing Director. In his first eighteen months Wolfson streamlined and rationalised the company. A loss of £55,000 in 1932 became a profit of £330,000 the next year. From 1934 onwards Wolfson acquired companies with large hire purchase debts and property assets, some for G.U.S. and some for his own business. These acquisitions provided cash for more acquisitions. Acquired companies included Midland and Hackney, Drages, Alexander Sloan, Jays and Campbells, British and Colonial and Smart Brothers. [2]

Wolfson was too old to go to war. As World War II approached and during the war he continued to buy. He reasoned that if Hitler won the war his businesses would be finished anyway, but, if not, then the opportunities would be enormous. In 1932, G.U.S. was worth £700,000, in 1938 £1,980,000 but by 1948 it was £16 million. This remarkable growth rate and aggressive acquisition plan was then succeeded by a gentler growth rate and a more corporate style. [2]

By 1970, Wolfson had sold his private business and handed over control of G.U.S. to his son Leonard. [2]

Wolfson was a brilliant financier and this was central to his early success. [2] Later he backed French–British financier, tycoon, and politician James Goldsmith. He also underwrote the hire purchase agreements of washing machine entrepreneur John Bloom at Rolls Razor but withdrew financial support in 1964, leading to the company's voluntary liquidation. [5]

In 1954 Wolfson was part of Kemsley-Winnick Television, which won the initial ITV weekend contracts for the Midlands and the North of England. However, shortly after the award of the contracts the consortium was shown not to have the financial backing required, causing it to collapse.

Wolfson was a devout orthodox Jew. He followed the example of his father and the middle-European community from which he came. He is quoted as having said, "No man should have more than £100,000. The rest should go to charity". He gave immense amounts to charities: from 1948 he included Zionist charities at the urging of his friend Israel Sieff. In 1962 he was appointed president of the United Synagogue, the first to be selected from descendants of the nineteenth century waves of immigrants. [2]

In 1955, Wolfson established the Wolfson Foundation, to aid in the advancement of education, health and youth activities. This supported the establishment of Wolfson College, Oxford (where he was a Founder Fellow), Wolfson College, Cambridge, the Wolfson Building at Somerville College, Oxford, the Wolfson Building at Trinity College, Cambridge, and the Wolfson Room at St David's College, among many other projects over the years; he thus became the only non-religious figure to have a college named after him at both Oxford and Cambridge. Professorships named after him exist at Bar-Ilan, Haifa, Jerusalem, Oxford and Tel Aviv. He was also a benefactor of the John Rylands Library donating the cost of a small extension in 1961. The Edith and Isaac Wolfson Trust financed two housing projects in Israel, both called Kiryat Wolfson, and the family supported the founding of Wolfson Medical Center in Tel Aviv. [6]

Wolfson's wife, the former Edith Specterman, was a vice-president of the English Jewish Welfare Board.

Isaac and Edith Wolfson's only child, a son, Leonard, was born in 1927.

GUS plc was an FTSE 100 retailing, manufacturing and financial conglomerate based in the United Kingdom. GUS was an abbreviation of Great Universal Stores, the company's name before 2001, while it was also known as the Glorious Gussies amongst stockbrokers. The company started out as Universal Stores, a mail order business created by the Rose family. In 1931, Isaac Wolfson joined the mail order company and would, through a series of takeovers, turn it into a retail, manufacturing and financial conglomerate, becoming Europe's biggest mail order firm and with over 2,700 physical stores. His son, Leonard Wolfson, followed him as chairman, to be succeeded by his nephews David Wolfson (1996–2000) and Victor Barnett (2000–2002). During the 1980s, the business divested much of its physical retail and manufacturing subsidiaries under Leonard Wolfson to concentrate on mail order, property and finance. In October 2006, the company was split into two separate companies: Experian which continues to exist, and Home Retail Group which was bought by Sainsbury's in 2016.

Philip Dennis Hobsbaum was a British teacher, poet and critic.

House of Fraser is a British department store group with 44 locations across the United Kingdom, which is now part of Frasers Group. It was established in Glasgow, Scotland in 1849 as Arthur and Fraser. By 1891, it was known as Fraser & Sons. The company grew steadily during the early 20th century, and after the Second World War a large number of acquisitions transformed the company into a national chain.

Hugh Fraser, 1st Baron Fraser of Allander, was the grandson of Hugh Fraser I, and the father of Sir Hugh Fraser, 2nd Baronet. He inherited his father's shop and built it into the large retail chain now known as House of Fraser.

The Wolfson Baronetcy, of St. Marylebone in the City of Westminster, was one of the last baronetcies created in the Baronetcy of the United Kingdom. It was created on 19 February 1962 for Isaac Wolfson, the businessman and philanthropist who established the Wolfson Foundation. In 1985, the 2nd Baronet, Leonard Wolfson, became a life peer as Baron Wolfson, of Marylebone in the City of Westminster.

Paz Oil Company Ltd. is the largest Israeli fuels company. Paz distributes gasoline and other petroleum products through a network of gas stations, as well as LPG and natural gas for home use through its subsidiary PazGaz.

David Wolfson, Baron Wolfson of Sunningdale was a British Conservative politician and businessman.

Gilbert de Botton was an Egyptian-Israeli-Swiss financial pioneer, who is considered the inventor of the open architecture model of asset management, whereby a financial institution offers third party products to their clients. He was also a prominent art collector.

Chaim Icyk Bermant was a British-based journalist, and author. Born in Braslav, Belarus, he spent much of his childhood in Barovke, Latvia, and Scotland. He was educated at Queen's Park Secondary School in Glasgow, Glasgow University, where he graduated in economics, and the London School of Economics.

Collaro was the name of a major early British manufacturer of gramophones, record players, and tape decks, throughout the early years of sound reproduction.

Kiryat Wolfson, also known as Wolfson Towers, is a high-rise apartment complex in western Jerusalem. Comprising five towers ranging from 14 to 17 stories above-ground, the project was Jerusalem's first high-rise development. The project encountered opposition from both municipal officials and the public at each stage of its design and construction. The complex includes 10,000 square feet (930 m2) of commercial space and a medical center. The project was financed by the Edith and Isaac Wolfson Trust. 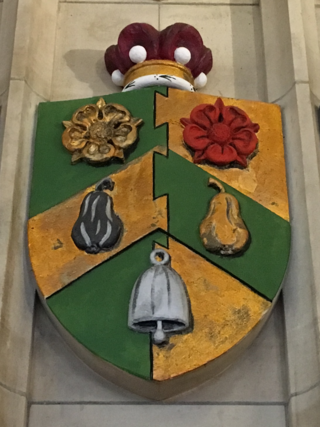 Keith Graham Riglin is an Anglican bishop in the Scottish Episcopal Church. Having ministered from 1983 within Baptist and Reformed churches, he took holy orders in the Church of England in 2008. In January 2021 he was elected Bishop of Argyll and The Isles.