Last updated February 14, 2021
Not to be confused with Isadore Singer.

Isidore Singer (10 November 1859 – 1939) was an editor of The Jewish Encyclopedia and founder of the American League for the Rights of Man.

Singer was born in 1859 in Weisskirchen, Moravia, in the Austrian Empire. He studied at the University of Vienna and the Humboldt University of Berlin, receiving his Ph.D. in 1884. [1]

After editing the Allgemeine oesterreichische Literaturzeitung (Austrian literary newspaper) from 1885 to 1886, he became literary secretary to the French ambassador in Vienna. [2] From 1887, he worked in Paris in the press bureau of the French foreign office and was active in the campaign on behalf of Alfred Dreyfus. In 1893 he founded a short-lived biweekly called La Vraie Parole as a foil to the anti-Jewish La Libre Parole . [3]

Singer moved to New York City in 1895 where he learned English and taught French, raising the money for the Jewish Encyclopedia he had envisioned. [4]

Over the course of his career, Singer also proposed many projects which never won backing, including a multi-million-dollar loan to aid the Jews of Eastern Europe, a Jewish university open to students of any background, various encyclopedias about secular topics, and a 25-volume publication series of Hebrew classics. By 1911, the date of this latter proposal, "neither the [Jewish] Publication Society nor any body of respectable scholars would work with him," according to encyclopedist Cyrus Adler. [5]

Singer held extremely liberal views which at times proved unpopular. He endorsed Jesus and the Christian New Testament and proposed a Hebrew translation. He founded the Amos Society to promote understanding among followers of monotheistic religions. [5]

His 1897 prospectus for the encyclopedia project called for harmony between religions; called the Sabbath and holidays "heavy burdens, or, at best, mere ceremonies" for most Jews; and made the radical suggestion that Jewish parents, if honest with their children, would tell them:

Our religion ... does not accord with your ideas. We have neither the power nor the desire to impose it on you. Make your peace with your God and your conscience as best you can," and, that said, let us cease to erect new synagogues, let us close our seminaries of theology, and let us disintegrate, little by little, our ancient communal institutions.

Due to the controversy of Singer's outlooks, his publisher, Funk & Wagnalls, agreed to the encyclopedia project only after divesting Singer of editorial control and appointing a board of prestigious Jewish scholars, including rabbis.

The Jewish Encyclopedia: A Descriptive Record of the History, Religion, Literature, and Customs of the Jewish People from the Earliest Times to the Present Day is an English-language encyclopedia containing over 15,000 articles on the history, culture, and state of Judaism up to the early 20th century. The encyclopedia's managing editor was Isidore Singer and the editorial board was chaired by Isaac K. Funk and Frank H. Vizetelly. 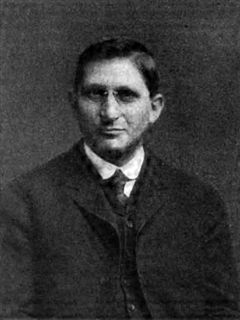 David Friedländer was a German banker, writer and communal leader.

Hagin ben Moses or Hagin filus Mossy was Presbyter Judaeorum or chief rabbi of the Jews of England and agent of Richard of Cornwall. He appears to have been the chirographer of the Jews of London, and obtained great wealth, but he lost it under Edward I. In 1255 he was appointed presbyter on the expulsion of Elias from that office. It seems probable that he was a brother of Elias. During the riots preceding the battle of Lewes in 1264 he fled to the Continent. His wife, Antera, and his son, Aaron, seem to have held possession of the only remaining synagogue in London at the time of the Edict of Expulsion in 1290.

Elijah Ba'al Shem or Eliyahu Ba'al Shem of Chełm was a Polish rabbi who served as chief rabbi of Chełm. He also studied Kabbalah, and, according to his descendant Tzvi Ashkenazi, created a golem. He is credited with creating the first golem with a "shem", so he was known as a "Ba'al Shem." He is the first rabbi in history to be known by this title.

Jacob Saphir (1822–1886) was a 19th-century writer, ethnographer, researcher of Hebrew manuscripts, a traveler and emissary of the rabbis of Eastern European descent who settled in Jerusalem during his early life.

Solomon Alami was a Portuguese-Jewish ethical writer of the 14th and 15th centuries, contemporary of Simon ben Ẓemaḥ Duran (רשב"ץ). He is known through his ethical treatise Iggeret Musar, which he addressed, in the form of a letter, to one of his disciples in 1415.

Joseph ben Samuel Bonfils was a French rabbi, Talmudist, Bible commentator, and payyetan of the mid-eleventh century. He is also known by the Hebrew name Yosef Tov Elem, a Hebrew translation from the French name "Bonfils."

A schulklopfer is the person who calls a Jewish community to prayer in the local synagogue. In modern times, the custom has more or less died out due to the creation of alarm clocks and technology, but it was historically common.

Moses Ensheim, also known as Brisac and Moses Metz, was a French-Jewish mathematician and Hebrew poet.

Aaron ben Tzvi Jonathanson was a Russian Hebrew writer and poet. He worked as a teacher in Vilna until about 1859, when he settled to Yanova. He corresponded with Isaac Erter; and Judah Leib Gordon, who was one of his pupils, remembered him with great affection and thought well of his poetry. Jonathanson was the author of Klei Shir, a collection of poems and epigrams.

Joseph Ezekiel Rajpurkar was a Bene Israel writer and translator of Hebrew liturgical works into Marathi.

Jacob Werber was an Galician Jewish editor and writer.

Israel (Isserl) ben Josef (around 1500 – 1568) was a wealthy Jewish merchant, banker, and Talmudist who settled in Kraków in 1519, following the expulsion of the Jews from the German city of Regensburg. He was the father of Moses Isserles and the founder of the Remah Synagogue in Kazimierz, now a district of Kraków, built in 1553 on land owned by Israel ben Josef.