Isobel Lilian Gloag (1865–1917) was an English painter, known for her oil and watercolour portraits, as well as posters and stained-glass designs. [2] [3]

Gloag was born in London, the daughter of Scottish parents from Perthshire. [4] Her early studies were made at St. John's Wood Art School, and she later studied at the Slade School of Fine Art. Ill health compelled her to put aside plans for regular study, and she entered the studio of M.W. Ridley's for private instruction, following this with work at the South Kensington Museum. After still further study with Raphaël Collin in Paris, she returned to London and soon had her work accepted at the Royal Academy of Arts, where she exhibited a total of 19 works. [5] [2] She was an elected member of the Royal Institute of Oil Painters and the New Society of Painters in Water-Colours. [3] Her earlier works were inspired by the Pre-Raphaelites, while later works were more modern, [3] and her works have been cited as examples of post-Victorian Aestheticism. [6] She made several designs for the stained-glass artist Mary Lowndes. Suffering from health problems throughout her life, she died in London on 5 January 1917, aged 51. [1] Her work was posthumously featured in an exhibition at the Grafton Galleries, London. [7]

Sarah Henrietta Purser was an Irish artist mainly noted for her work with stained glass.

Eleanor Fortescue-Brickdale was an English artist known for her paintings, book illustrations and for a number of works in stained glass.

Annie Louisa Robinson Swynnerton was a British painter best known for her portrait and symbolist works, but who was also a capable landscapist. She studied at Manchester School of Art, Académie Julian, and in Rome. Swynnerton was influenced by George Frederic Watts and Edward Burne-Jones. John Singer Sargent appreciated her work and helped her to become the first elected woman member at the Royal Academy of Arts in 1922. Swynnerton painted portraits of Henry James and Millicent Fawcett. Her works are in collections in the England, Scotland, and abroad. She was married to sculptor Joseph Swynnerton. They lived together in Rome. Swynnerton was a close friend of leading suffragists of the day, notably the Pankhurst family. 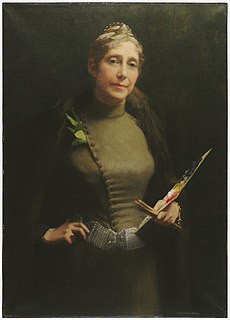 Sarah de St. Prix Wyman Whitman (1842–1904) was an American stained glass artist, painter, and book cover designer. Successful at a time when few women had professional art careers, she founded her own firm, Lily Glass Works. Her stained glass windows are found in churches and colleges throughout the northeastern United States. As a member of the board of the Harvard University "Annex," she helped to found Radcliffe College.

Hope is a late oil painting by the Pre-Raphaelite artist Edward Burne-Jones. It was painted on commission for Mrs. George Marston Whitin of Whitinsville, Massachusetts in 1896.

Lilian Holt (1898–1983) was a British artist, also known by her married name, Bomberg. She was a founding member of the Borough Group. Her dedication to her partner and family limited her career and opportunities as an artist.

Madeline Francis Jane Marrable, née Cockburn was a prolific London based watercolourist and oil painter specialising in landscapes with a preference for mountains and snowscapes. She traveled widely to places including Austria, France, Italy, Ireland, Switzerland and Venice. Noted works include: Ancient Cedars at Ankerwycke, Staines, Moonlight at Chiavenna and The Diligence Halting. She exhibited both in Britain and abroad, including at the Royal Academy between 1864 and 1903. She exhibited her work at the Palace of Fine Arts and The Woman's Building at the 1893 World's Columbian Exposition in Chicago, Illinois. Her painting Isola Bella Lago Maggiore was included in the 1905 book Women Painters of the World. In 1886, Marrable was elected as the first President of the Society of Lady Artists (SLA), formerly the Society of Female Artists (SFA) and since 1899 is now known as the Society of Women Artists (SWA), she retired from the presidency in 1912.

Kathleen Fox was an Irish painter, enamellist, and stained-glass artist.

Adelaide Sophia Claxton was a British painter, illustrator, and inventor. She was one of the first women artists to make a major part of her living through the commercial press, selling satirical and comic illustrations to more than half a dozen periodicals.

Teresa Norah Copnall, was a British painter known for her flower studies and portrait painting.

Florence Ada Engelbach née Neumegen was a painter of portraits, landscapes and flower pieces. She was born in Spain to English parents and, after training in London, established her artistic career in Britain.

Jessica Ellen Hayllar was a British artist and painter.

Georgina Mossmen Greenlees (1849–1932) was a Scottish artist known for her landscape painting. She was an advocate for art education and practice for women.

Maria Ann Chalon was a British painter of miniatures. She was Portrait Paintress to his Royal Highness, the Duke of York, and is considered one of the most talented and successful female British miniaturists of the early nineteenth century.