Parma Calcio 1913, commonly referred to as Parma, is an Italian football club based in Parma, Emilia-Romagna. It currently plays in Serie A.

Associazione Calcistica Perugia Calcio, previously A.C. Perugia, Perugia Calcio and commonly referred to as simply Perugia, is an Italian football club based in Perugia, Umbria. Founded in 1905 has amongst its best records a runners-up in 1978–79 Serie A season, in which they finished unbeaten, and the 2003 UEFA Intertoto Cup. The team currently plays in Serie B after promotion from Lega Pro Prima Divisione in 2013–14 season.

Società Sportiva Dilettantistica Sanremo Calcio, commonly referred to as Sanremese, is an Italian association football club, based in Sanremo, Liguria.

Associazione Sportiva Dilettantistica Torres Calcio Femminile was an Italian women's association football club based in Sassari, Sardinia. The club was formed in 1980 and competed in women's Serie A until 2015. Torres's colours were blue and red. The team won seven scudetti and eight Italian Women's Cups. They were refused a license for the 2015–16 Serie A season due to debts.

Giovanni Lopez is an Italian professional football coach and a former player, who played as a defender.

Fabio Viviani is an Italian professional football coach and former player, who played as a midfielder. He is currently manager of Al-Ittihad Kalba.

Melania Gabbiadini is an Italian former football forward. After beginning her career with Bergamo in 2000, she later joined AGSM Verona in 2004 and went on to captain the team, until her retirement in 2017. She won five Scudetti with the club.

Ilaria Mauro is an Italian football striker who plays for Fiorentina in Italy's Serie A. She has also played for the Italian national team. 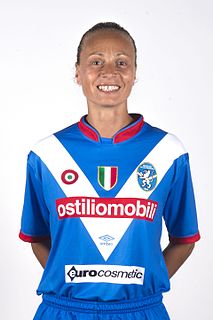 Roberta D'Adda is an Italian football defender who plays for Inter Milan and the Italy women's national football team. She has won four leagues with ASD Fiammamonza, CF Bardolino and ACF Brescia. D'Adda was part of the Italian squad at the 2009 and 2013 editions of the UEFA Women's Championship.

Sara Gama is an Italian footballer who plays as a defender for Juventus of the Italian Serie A and the Italy women's national football team, for which she serves as captain. She has also played for PSG of Division 1 Féminine, UPC Tavagnacco and Calcio Chiasiellis of Serie A, as well as American W-League team Pali Blues.

Maria Rita Guarino is an Italian football manager and a former player. She is the current manager of Juventus Women and in May 2018 led the team to a Serie A championship. She previously played for Italy's national team.

ASD Napoli Calcio Femminile, also known as Napoli Carpisa Yamamay for sponsorship reasons, is an Italian women's football club from Naples that competes in Serie C. Founded as ASD Calciosmania Napoli, it took its current name in 2006 after merging with SSC Venus Napoli. In 2012 it reached the national cup's final, lost to ACF Brescia after extra time, and it attained promotion to Serie A for the first time.

Daniela Stracchi is an Italian football midfielder. She plays for Atalanta Mozzanica in the women's Serie A.

Juventus Football Club S.p.A., also known as Juve or with the commercial name of Juventus Women, is an Italian women's association football club based in Turin, section of the homonymous professional football club. It was established in 2017 by acquiring the Serie A license of a Cuneo-based team Cuneo Calcio Femminile. The team competes in Serie A since its debut in 2017–18 season.

Milena Bertolini is an Italian former footballer and current manager of the Italy women's national team. As the national team coach, she led Italy to qualify for the 2019 FIFA Women's World Cup following a twenty year absence.