Italy women's national rugby union team are the national women's rugby union team that represents Italy at international level. It has been administered by Federazione Italiana Rugby since 1991; previously, since its inception in 1985 up to 1991, it was administered by UISP – Unione Italiana Sport Popolari (Italian Union for People's Sports), an association which promotes amateur sports at every level of the society.

(Full internationals only)Correct as of 22 March 2015

The Top10, known as the Peroni Top10 for sponsorship reasons, and formerly Top 12, is Italy's top level professional men's rugby union competition. The Top 10 is run by Federazione Italiana Rugby (FIR) and is contested by 10 teams as of the 2019-2020 season, following the Italian federation's decision to name Peroni as the official partner of the Top10 competition.

Rugby league is a team sport played in Italy.

Rugby union in Italy is governed by the Italian Rugby Federation. Rugby was introduced into Italy in the early 1900s. It is also known as pallovale or palla ovale within Italy. Two Italian professional teams compete in Pro14, a league that also includes sides from Ireland, Scotland, South Africa and Wales. One of the teams is guaranteed a place in the European Rugby Champions Cup; the other normally plays in the European Rugby Challenge Cup. The Top12 is the main national club competition. Four Italian clubs from the national championship compete in a qualifying tournament that awards two places in the Challenge Cup. Italy competes in the Six Nations Championship and Rugby World Cup, and is classified as a tier one nation by World Rugby.

The Italy women's national volleyball team is governed by the Federazione Italiana Pallavolo (FIPAV). The team's biggest victories were the gold medal at the 2002 FIVB Women's World Championship, being the first team to break the domination of Russia, Cuba, China and Japan, and the 2007 and the 2011 World Cup, winning 21 out of the 22 matches in both tournaments.

The Giuseppe Garibaldi Trophy is a rugby union trophy awarded to the winner of the annual Six Nations Championship match between France and Italy.

Marzio Innocenti is a former Italian rugby union player and a current coach. He played as a flanker and a number 8.

The 2010 FIRA tournament included all the continent's major teams who did not qualify for the World Cup, plus Sweden and a France "A" team. Prior to the tournament Jean-Claude Baqué, Chairman of the FIRA-AER, explained the philosophy of the European Trophy. "The European Trophy is an important tournament for the development of women 15's rugby within Europe. The European Championship takes place each four years but the FIRA-AER must propose games to emerging unions through a serious competition and with the help of the big nations" Unusually, and for no published reason, all games were only 35 minutes per half.

The 1990–92 FIRA Trophy was the 29th edition of a European rugby union championship for national teams. The format returned to a two-year tournament.

The 1995–1997 FIRA Trophy was the 31st edition of the European rugby union championship for national teams. The 1995-97 edition was arranged once again with a new format. 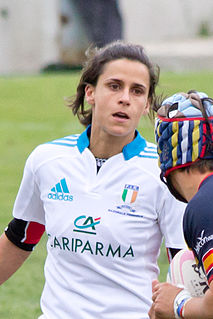 Sara Barattin is an Italian rugby union player who plays as scrum-half for ASD Villorba Rugby and the Italy women's national rugby union team, where she was the captain from 2016 to 2018. During the 2019 Women's Six Nations championship Barattin became Italy's most capped player (89) overtaking Michela Tondinelli, retired at 87.