Ivan Mihaylov (Bulgarian : Иван Михайлов; born 30 September 1998) is a Bulgarian professional footballer who most recently played as a midfielder for Levski Lom. [1]

Ivan Mihailov Gavrilov, sometimes Vancho Mihailov, was a Bulgarian revolutionary in interwar Macedonia, and the last leader of the Internal Macedonian Revolutionary Organization (IMRO). Under Mihailov, the IMRO identified itself closely with Bulgarian nationalism. He also cooperated actively with Mussolini's Fascist Italy, Admiral Horthy's Hungary and Hitler's Nazi Germany. He changed the organization's tactics from guerrilla campaigns to individual terrorist acts. Numerous terrorist attacks were carried out by IMRO against Yugoslav officials under his leadership, the most spectacular of which was the assassination of Alexander I of Yugoslavia, in collaboration with Croatian Ustaše. During the last stage of the Second World War he tried to realize the IMRO plan about Independent Macedonia, however he abandoned this idea due to the lack of real German military support. At the end of the Cold War, only a months before his death in 1990, he kept insisting: I am Bulgarian from Macedonia. Thus, rejecting the 20th century Macedonian national separatism, he is considered a bulgarophile traitor in North Macedonia.

Borislav Biserov Mihaylov is a Bulgarian former professional footballer, who played as a goalkeeper, and former President of the Bulgarian Football Union. He is also a former member of the executive committee of UEFA. 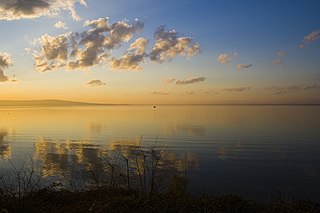 Nikolay Borislavov Mihaylov is a Bulgarian professional footballer who plays as a goalkeeper for Levski Sofia, where he is also the captain, and the Bulgarian national team.

FC Montana is a Bulgarian association football club based in Montana, which currently plays in the Second League, the second level of Bulgarian football league system.

Barakovo is a village in Kocherinovo Municipality, Kyustendil Province of southwest Bulgaria. As of 2013, it had a population of 468. It is situated at the western foothills of the Rila Mountains on the banks of the Rilska River. Between 1974 and 1991 it was administratively a neighbourhood of the town of Kocherinovo.

Mihail Mihaylov is a Bulgarian former football midfielder who played several seasons for PFC Velbazhd Kyustendil. He also had a brief stint in Germany for SSV Ulm 1846. 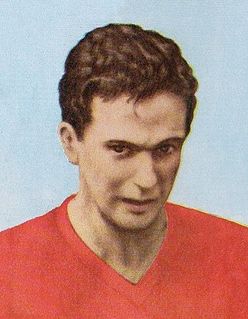 Atanas Hristov Mihaylov was an association football former forward and manager. Mihаylov is the top scorer in the history of the Bulgaria U21 team, managing 31 goals in 46 appearances. He played 45 games for the Bulgaria national football team, scored 23 goals, and won a silver medal at the 1968 Summer Olympics; he also played at the 1974 World Cup. Most of Mihaylov's club career was spent with Lokomotiv Sofia, but he also played for two years in Cyprus for Nea Salamina. He won the top Bulgarian league on two occasions. Mihaylov was known for his skills from set pieces, including scoring from corners.

Item One is a 1956 Bulgarian drama film directed by Boyan Danovski. It was entered into the 1956 Cannes Film Festival.

Veselie is a village in Primorsko Municipality, Burgas Province, in southeastern Bulgaria. As of 2013 it has 539 inhabitants. 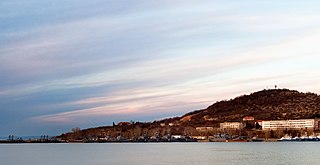 Atia is a village in Sozopol Municipality, Burgas Province, south-eastern Bulgaria. As of 2013 it has 825 inhabitants. It hosts Bulgaria's largest naval base. 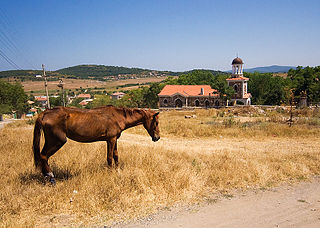 Ravadinovo is a village in Sozopol Municipality, in Burgas Province, in southeastern Bulgaria. As of 2013 it has 691 inhabitants.

Rosen is a village in Sozopol Municipality, in Burgas Province, in south-eastern Bulgaria. As of 2013 it has 1470 inhabitants. 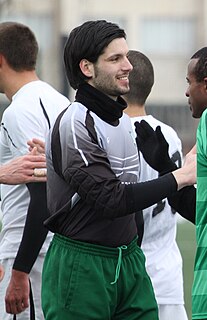 Emil Mihaylov is a Bulgarian footballer who plays as a goalkeeper.

Mikhaylov or Mikhaylova, also transliterated as Mikhailov, is a surname that is derived from the male given name Mikhail and literally means Mikhail's.

After the Fire Over Russia is a 1929 Bulgarian silent drama film directed by Boris Grezov and starring Tacho Kolarov, Baronesa Loudon and Konstantin Kisimov. The film is based on a novel by Pancho Mihaylov. It portrays the lives of a group of White Russians who fled into exile in Bulgarian to work in local mines following the Russian Revolution. 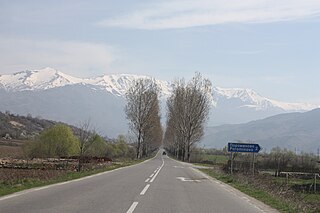 Porominovo is a village in Kocherinovo Municipality, Kyustendil Province, south-western Bulgaria. As of 2013 it has 453 inhabitants. It is situated at the western foothills of the Rila Mountains on the banks of the Rilska River in the vicinity of the Stob Earth Pyramids.

Biser Mihaylov was a Bulgarian footballer who played as a goalkeeper. He spent all 14 seasons of his career at A Group club Levski Sofia, before retiring at the age of 32 in 1975.

Ivaylo Mihaylov is a Bulgarian footballer who plays as a midfielder for Sportist Svoge.