Fudbalski klub Borac 1926 Čačak, or simply Borac Čačak, is a professional football club based in Čačak, Serbia. The home ground is Čačak Stadium, which has seating capacity of 8,000. As of 2020–21 season, the club competes in Second tier Serbian First League.

Fudbalski klub Mladi Radnik is a Serbian football club based in Požarevac.

Đuro Ostojić is a Montenegrin retired professional basketball executive and former player who is a general manager for Studentski centar. At 2.09 m, he played the center position.

Ostojić or Ostoić is a South Slavic surname derived from a masculine given name Ostoja. It may refer to:

Bojan Ostojić is a Serbian professional footballer who plays as a defender for Partizan.

Miloš Ostojić is a Serbian professional footballer who plays as a centre-back for Serbian SuperLiga club FK Čukarički. 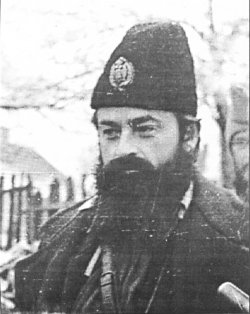 Lieutenant Colonel Zaharije Ostojić was a Montenegrin Serb and Yugoslav military officer who served as the chief of the operational, organisational and intelligence branches of the Chetnik Supreme Command led by Draža Mihailović in Yugoslavia during World War II. He was a major in the Royal Yugoslav Army Air Force prior to the Axis invasion of Yugoslavia, and was involved in the coup that deposed Prince Paul of Yugoslavia on 27 March 1941. After the coup, he escorted Prince Paul to exile in Greece, and was in Cairo during the invasion in April. In September 1941, he was landed on the coast of the Italian governorate of Montenegro along with the British Special Operations Executive officer Captain Bill Hudson and two companions. He escorted Hudson to the German-occupied territory of Serbia and introduced him to the Yugoslav Partisan leader Josip Broz Tito at Užice, then accompanied Hudson to Ravna Gora to meet Mihailović. Ostojić soon became Mihailović's chief of staff, and after the German attempt to capture the Chetnik leader during Operation Mihailovic in December 1941, brought the Chetnik Supreme Command staff to Montenegro where they were re-united with Mihailović in June 1942. During the remainder of 1942, Ostojić launched a counter-attack against Ustaše troops of the Independent State of Croatia returning to the eastern Bosnian town of Foča where they were expected to continue their genocidal anti-Serb policies. As many as 2,000 local Muslims were subsequently killed in the town by forces under Ostojić's command. Ostojić later oversaw large-scale massacres of civilians and burning of Muslim villages in the border region between Montenegro and the Sandžak.

Branko Ostojić is a Bosnian Serb footballer who plays as defensive midfielder for Borac Čačak.

Danilo Ostojić is a Serbian professional basketball player for HydroTruck Radom of the Polish Basketball League.

Ivan Dokić is a Serbian football goalkeeper, who plays for Spartak Subotica.

Dubravka Ostojić is a Croatian actress.

Jovo Ostojić was a politician and paramilitary figure in Serbia. He served in the National Assembly of Serbia on two occasions as a member of the far-right Serbian Radical Party.

Darko Ostojić, known by his nickname Ogi, is a Bosnian musician and actor. He first found mainstream success for his portrayal of Minka and Cane Prebranac in the TV Sarajevo series Top lista nadrealista. Also, he was a member of a Bosnian garage rock band Zabranjeno Pušenje during late 1980s. Other TV roles include Složna braća and the Nadreality Show.