Williams was born in Newton Abbot in Devon and educated privately. Her parents were Emma and George St Swithin Williams. Her father was a solicitor. Her brother Winter Williams became a barrister, but died in an accident on 14 July 1903. [1]

She studied law at the Society of Oxford Home Students (later St Anne's College). By 1903, she had completed all her law examinations, but was prevented by the prevailing regulations concerning the qualification of women at Oxford from matriculating or receiving her BA, MA and BCL until the regulations were reformed in 1920. [2] She obtained LLB from the University of London in 1901, and LLD from the same university in 1903.

After the Sex Disqualification (Removal) Act 1919 came into force in December 1919, which abolished the prohibition on women becoming barristers, she joined the Inner Temple as a student on 26 January 1920 after Theodora Llewelyn Davies. She was called to the bar on 10 May 1922, [3] having received a certificate of honour (first class) in her final bar examination in Michaelmas 1921 which excused her from keeping two terms of dinners. Her call to the bar was described by the Law Journal as "one of the most memorable days in the long annals of the legal profession". [4] She was soon followed by other women, including Helena Normanton.

Williams did not enter private practice, but taught law at the Society of Oxford Home Students from 1920 to 1945. In 1923 she became the first woman to be awarded the degree of DCL (Doctor of Civil Law) [5] in Oxford for her published work, The Sources of Law in the Swiss Civil Code. In 1956 she was elected an Honorary Fellow of St Anne's College, Oxford.

She enjoyed tennis, travelling, gardening, and driving. She learned to read Braille after she began to lose her sight in later life, and she wrote a Braille primer which was published by the National Institute for the Blind in 1948. [1]

In 2020 barrister Karlia Lykourgou set up the first outfitter dedicated to offering courtwear for women. She named it Ivy & Normanton, in honour of Williams and Helena Normanton. [6] 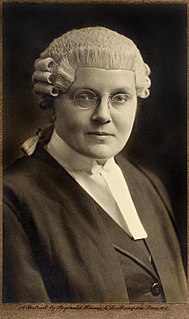 Helena Florence Normanton, KC was the first woman to practise as a barrister in England. In November 1922, she was the second woman to be called to the Bar of England and Wales, following the example set by Ivy Williams in May 1922. When she married she kept her surname and in 1924 she was the first British married woman to have a passport in the name she was born with.

Dame Elizabeth Kathleen Lane, DBE was an English barrister and judge. She was the first woman appointed as a judge in the County Court, and the first female High Court judge in England. 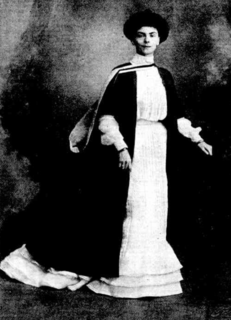 Sarah Caudwell was the pseudonym of Sarah Cockburn, a British barrister and writer of detective stories. She is best known for a series of four murder stories written between 1980 and 1999, centred on the lives of a group of young barristers practicing in Lincoln’s Inn and narrated by a Hilary Tamar, a professor of medieval law, who also acts as detective. 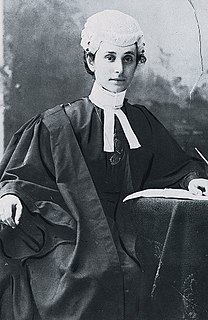 Ethel Rebecca Benjamin was New Zealand's first female lawyer. On 17 September 1897, she became the first woman in the British Empire to appear as counsel in court, representing a client for the recovery of a debt. She was the second woman in the Empire to be admitted as a barrister and solicitor, two months after Clara Brett Martin of Canada.

Jessie Chrystal Macmillan was a suffragist, peace activist, barrister, feminist and the first female science graduate from the University of Edinburgh as well as that institution's first female honours graduate in mathematics. She was an activist for women's right to vote, and for other women's causes. She was the second woman to plead a case before the House of Lords, and was one of the founders of the Women's International League for Peace and Freedom.

Eliza Orme, also called Elizabeth Orme was the first woman to earn a law degree in England, from University College London in 1888. 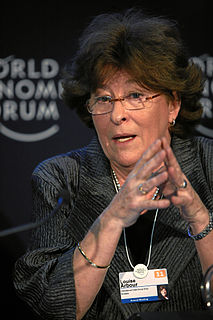 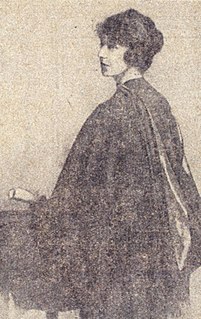 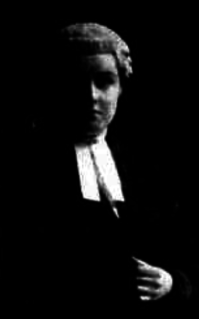 Frances Christian Kyle was an Irish barrister and the first woman, together with Averil Deverell, to be admitted to the bar in Ireland on 1 November 1921. It not only made headlines in Dublin but also in New York, London, and India. It was almost a year before any woman was called to the English bar. 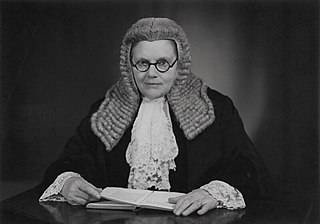 Bertha Cave (1881–1951) was a legal campaigner who fought, unsuccessfully, to be accepted to the bar.

Theodora Llewelyn Davies was a British barrister and penal reform campaigner. She was the first woman admitted to the British legal profession's Inner Temple in 1920.

Beatrice Honour Davy was a British barrister and later solicitor in the first British law firm run exclusively by women. In 1937 she became the first woman qualified to practice as a solicitor in both England and Scotland. 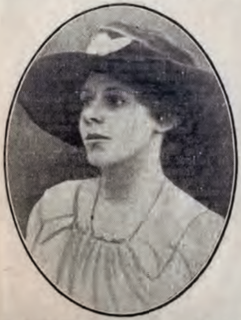