Jérémie Pierre Bréchet (born 14 August 1979) is a former French professional footballer. He was usually used as a left-back but could play as a centre-back. Because of his technical skills he could also play in midfield.

He was capped three times for the French national side.

Born in Lyon, Rhône-Alpes, France, Jérémie Bréchet started his career at local club Olympique Lyonnais. Hemade his debut in the professional football during the 1998–99 season. In that season he played 15 times. Bréchet played in Lyon until 2003, amassing a total of 116 games for the club and winning the Ligue 1 championship in the 2001–02 and the 2002–03 seasons. In July 2003, Bréchet was transferred to the Inter Milan.

The 2003–04 season started well for Inter, but after six average games, manager Héctor Cúper was fired from Inter and Corrado Verdelli took over. Following the new manager appointment and having sustained an injury, Bréchet was featured for only a few more games. In total, Bréchet played nine games for Inter. Inter informed him that he could leave the club. In 2004, Bréchet signed a contract with Real Sociedad.

Bréchet played for Real Sociedad in the La Liga for two seasons. As Bréchet was injured seriously, he managed only 20 appearances for the club.

At the ambitious FC Sochaux, Bréchet made an impressive start on the pitch. After three games, he was appointed captain of the squad. At "Les Lionceaux", he had two strong seasons and became a key player for the team staying injury-free. During his captaincy Sochaux managed to win the Coupe de France twice. In June 2008, Bréchet left the club and moved to PSV Eindhoven.

In the season 2008–09 Bréchet joined the Dutch club Eindhoven signing a contract for three years. He wished to play with number 13 jersey, which he was assigned.

On 22 June 2009, Bréchet agreed a move back to FC Sochaux, insisting his decision was because of his family. [2] Following the end of the 2011–12 season, Bréchet became a free agent as his contract was not extended.

On 9 August 2012, he signed a one-year contract with newly promoted Ligue 1 side Troyes AC.

After one year with Bordeaux, Bréchet signed for a Ligue 2 team for the first time in his career, joining Gazélec Ajaccio on a one-year deal. [4]

Kim Mikael Källström is a Swedish retired professional footballer who played as a midfielder. He was noted for his play-making ability and free-kick taking.

Mathieu Bodmer is a French professional footballer who plays for Ligue 1 club Amiens SC. He usually plays as a central midfielder known for his technique, playmaking skills and good striking of the ball.

Benoît Pedretti is a retired French football midfielder. He was a deep lying playmaker well known for his wide range of passing.

Pierre-Alain Frau is a French former professional footballer. He played as a striker or winger for Sochaux, Lyon, Lens, Paris Saint-Germain, Lille, and Caen in France and for Al-Wakrah.

Camel Meriem is a French former professional footballer who played as a midfielder for Sochaux, Bordeaux, Marseille, AS Monaco, Aris, Arles-Avignon, OGC Nice, and Apollon Limassol. He has represented France at international level. 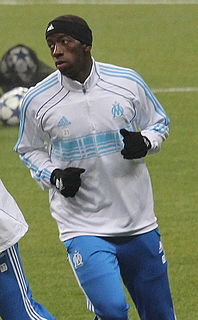 Souleymane Diawara is a Senegalese former professional footballer who played as a defender. Apart from a brief stint at Charlton Athletic, he spent most of his career in France, playing for Le Havre, Sochaux, Bordeaux, Marseille and OGC Nice. On international level, he represented Senegal. 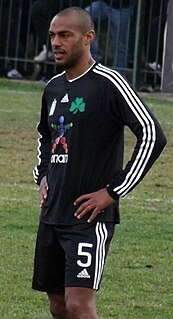 Cédric Kanté is a Malian former professional footballer who played as a defender. He won 41 caps with the Mali national team scoring once.

Florian Marange is a French former professional footballer, who played as a left-back. His former clubs include Girondins de Bordeaux and Crystal Palace.

Olympique Lyonnais won Division 1 season 2001/2002 of the French Association Football League with 66 points. The title was decided in the very final game of the season when Lyon defeated erstwhile championship leaders Lens at Stade Gerland. Lyon had to win the match to take the title, and won 3–1, ending Lens's title dream. It was Lyon's first league championship, and it began their record seven successive league titles.

The 2007 Coupe de France Final was a football match held at Stade de France, Saint-Denis on 12 May 2007, that saw FC Sochaux-Montbéliard defeat Olympique de Marseille in a penalty shoot-out. After normal time and extra time could not separate the two sides, the match was to be decided on penalty kicks. Toifilou Maoulida and Ronald Zubar miss for Olympique de Marseille, whereas only FC Sochaux-Montbéliard's captain, Jérémie Bréchet missed for the winning team.

Mevlüt Erdinç is a Turkish professional footballer who plays as a forward for Fenerbahçe.

Sloan Privat is a French professional footballer who plays as a forward for Ligue 2 club Sochaux.

Olympique Lyonnais is a French football club in Lyon. They play in France's highest football division, Ligue 1, and are one of the most successful clubs in French football, having won seven league titles, which ranks fourth all-time. The club has played 51 seasons in the top division and have played in over 1,800 Ligue 1 matches. 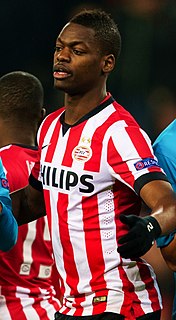 Nicolas Johnny Isimat-Mirin is a French professional footballer who plays as a central defender for Toulouse FC, on loan from Turkish club Beşiktaş.

Fernando Ezequiel Cavenaghi is a retired Argentine professional footballer. He played as a striker who was efficient in front of goal with either foot and from any range.

The 2010–11 season was Lille's 51st season in the top division of French football . This season is one of the most important in the club's history, as they won the Ligue 1 and Coupe de France which they had not conquered since 1954 and 1955 respectively.