Jørgen is a Danish, Norwegian, and Faroese masculine given name cognate to George 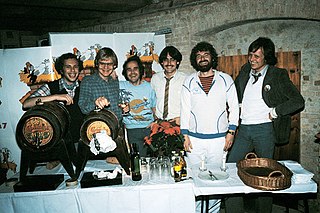 Shu•bi•dua or Shu-bi-dua is a Danish pop group which was formed in 1973 in Copenhagen with an expansion of the group Passport. Throughout their 40-year history, Shu-bi-dua has changed its lineup many times, however its lead singer Michael Bundesen has been with the band throughout, except for the gap between 1984 and 1987. They have produced many hits in Denmark like Vuffeli-vov, Hvalen Hvalborg, Står på en Alpetop, Stærk Tobak, Familien kom til Kaffe, Sex Chikane, We wanna be free, and many more.
Their musical style owed much to folk and Central European schlager. They are the Danish band with most selling albums in Denmark.

Thorup is the name of at least 13 villages and towns in Denmark, and is also used as a surname. The name Thorup ends on "rup", which means that it originates from the late Viking Age, circa AD 1000. The name Thorup may refer to:

Jörgen Sundelin is a retired Swedish sailor. Together with his brothers Peter and Ulf he won a gold medal in the 5.5 metre class at the 1968 Olympics and a silver medal at the 1969 World Championships. The brothers also won the 1971 world title in the three-person keelboat and placed sixth and ninth at the 1972 and 1976 Olympics, respectively. Besides sailing Jörgen and Peter also played ice hockey for Skuru IK.

Kirsten Thorup, a Danish author, was born in Gelsted, Funen, Denmark in 1942 and now lives in Copenhagen. She is the author of three poetry collections, a volume of short stories, and three novels including Baby which has been translated into English. She has also written for films, television, and radio. Her novel, Den lange sommer, was published in Denmark in 1979.

Jørgen Bojsen-Møller is a Danish sailor and Olympic Champion. He competed at the 1988 Summer Olympics in Seoul and won a gold medal in the Flying Dutchman class, together with Christian Grønborg. At the 1992 Summer Olympics in Barcelona he received a bronze medal in the Flying Dutchman, together with his cousin Jens Bojsen-Møller.

Events from the year 1944 in Denmark.

Events from the year 1953 in Denmark.

Majken Thorup Toft is a Danish former swimmer who won a bronze medal in the 50 m breaststroke at the 2004 European Aquatics Championships. The same year she competed in three events at the 2004 Summer Olympics, but was eliminated in the preliminaries. She retired from swimming in 2005 due to pericarditis that resulted in her hospitalization earlier that year. During her career she set 27 national records.

Thorup's Kælder is a listed structure and a bar in Aarhus, Denmark. It is a basement built approximately 1300 by Cistercian monks. The basement was listed on the Danish registry of protected buildings and places by the Danish Heritage Agency on 1 January 1959. The listing is officially "Den Grå Kannikegård" which refers to the entirety of the building on the address although only the basement beneath it is protected. The structure is situated in the historic Latin Quarter neighbourhood on Store Torv adjacent to the Cathedral.

The 28th District of the Iowa House of Representatives in the state of Iowa.