Jüri Jaanson (born 14 October 1965) is the most successful Estonian rower of all time and the winner of five medals at World Rowing Championships. He became World Champion in Tasmania 1990 in the single sculls event. 14 years later, at age 38 he won an Olympic silver medal in the single sculls event at the 2004 Summer Olympics in Athens. [2] In Beijing 2008 he won his second Olympic silver medal, this time in the double sculls event with Tõnu Endrekson. [3] He is a member of the SK Pärnu rowing club located in Pärnu. In 2007, Jaanson became the oldest rower ever to win a World Cup event at the age of 41 in Amsterdam. [4]

Jaanson was born in Tartu, and had to overcome a particularly challenging childhood, brought on by a severe case of pneumonia at the age of 2. Doctors gave antibiotics which saved him, but which also left him almost completely deaf. He attended a school for the deaf until he obtained a primitive hearing aid at the age of 12, allowing him to attend a regular school. Still, being a loner, he struggled with fitting in. At Tartu University, when a coach introduced him to rowing, he took to it passionately, in fact so passionately that he left the University to focus on rowing. [5] He wears hearing aids on a regular basis and was also seen wearing them during his rowing competitions.

Jaanson is among four athletes to compete in rowing at six Olympics, with Romanian Elisabeta Lipă in 2004, Canadian Lesley Thompson (cox) in 2008, and Australian James Tomkins.

On 18 November 2010, Jaanson announced ending his career. In July 2011 he was awarded with the Thomas Keller Medal, the highest honor in rowing. [6]

He is also a member of the Estonian parliament, the Riigikogu for the Reform Party.

The men's single sculls competition at the 2004 Summer Olympics took place at Schinias Olympic Rowing and Canoeing Centre, Greece. The event was held from August 14 until August 19. These are the results of the Men's single sculls competition, one of six events for male competitors in Rowing at the 2004 Summer Olympics in Athens. 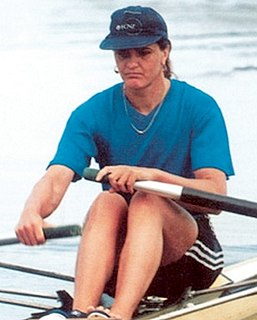 Elisabeta Lipă is a retired rower and government official from Romania. She is the most decorated rower in the history of the Olympics, winning five gold, two silver and one bronze medals. She holds the record amongst rowers for the most years between gold medals, at 20 years.

Alessio Sartori is an Italian competition rower and Olympic champion.

Rossano Galtarossa is an Italian competition rower and Olympic champion. 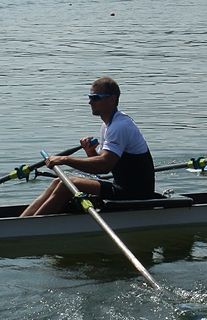 Allar Raja is an Estonian rower. He is a member of rowing club "SK Kalev" located in Pärnu.

Andrei Jämsä is an Estonian rower. Due to a back injury he could not compete in 2007. He is a member of rowing club "Pärnu Sõudeklubi" located in Pärnu.

Igor Kuzmin is an Estonian rower. He is a member of rowing club "SK Narva Energia" located in Narva.

Leonid Gulov is a retired Estonian rower. He was fourth in the double sculls event with Tõnu Endrekson at the 2004 Summer Olympics in Athens. He is a member of rowing club "SK Narva Energia" located in Narva.

David William Crawshay is an Australian former rower, an eleven-time national champion, an Olympic champion and medalist at World Championships. He represented Australia in rowing at three consecutive Olympic games from Athens 2004 to London 2012.

Georgina Emma Buchanan Earl, better known under her maiden name Georgina Evers-Swindell, is a former New Zealand rower. She competed in the double sculls with her identical twin sister Caroline Evers-Swindell, and is a double Olympic gold medallist, having won at Athens in 2004 and Beijing in 2008. In November 2005 she and her sister were named Rowing Female Crew of the Year by the International Rowing Federation (FISA), and in 2016 they became the first New Zealanders to be awarded the federation's highest award, the Thomas Keller Medal. She is 180 cm tall, weighs 80 kg and currently resides in Napier, New Zealand.

Kaspar Taimsoo is an Estonian rower. He is a member of Viljandi Rowing Club.

Sport plays an important role in Estonian culture. Estonia first competed as a nation at the 1920 Summer Olympics, although the National Olympic Committee was established in 1923. Estonian athletes took part at every Olympic Games until the country was annexed by the Soviet Union in 1940. The 1980 Summer Olympics sailing regatta was held in the capital city Tallinn. Estonia has won most of its Olympic medals in wrestling, athletics, weightlifting, and cross-country skiing.

Kerry Hore is an Australian former rower, a national champion, world-champion and four-time Olympian who competed in the women's quadruple sculls at the 2004, 2008, 2012 and 2016 Summer Olympics. She was in Australian quad sculls which won a 2003 World Championship and a bronze medal at the Athens Olympics. 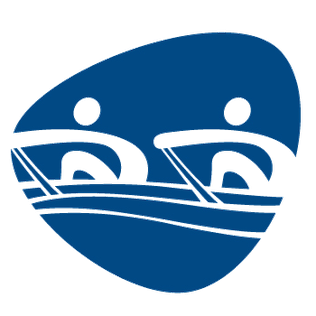 The rowing competitions at the 2016 Summer Olympics in Rio de Janeiro took place from 6 to 13 August 2016 at the Rodrigo de Freitas Lagoon in Copacabana. Fourteen medal events were being contested by 547 athletes, 334 men and 213 women.

Panagiotis Magdanis is a Greek rower. He is a two-time World Champion in the men's lightweight quadruple sculls.

The men's single sculls competition at the 1996 Summer Olympics took place at Lake Lanier, Atlanta, United States of America. The event was held from 21 to 27 July 1996.

Estonia competed at the 2016 Summer Olympics in Rio de Janeiro, Brazil, from 5 to 21 August 2016. It was the nation's seventh consecutive appearance at the Games in the post-Soviet era and twelfth overall in Summer Olympic history.