Jānis Frīdrihs Baumanis (May 23, 1834, Riga – March 19, 1891, Riga) was a Baltic German architect. Baumanis designed the Riga Circus in 1888. [1] He was responsible for a number of important public buildings of eclectic design constructed in the second half of the 19th century in Riga.

Jānis Frīdrihs Baumanis was born in 1834 in Riga, the son of a ferryman. In his youth he started work as a carpenter. In Riga he was spotted by the St. Petersburg architect Ludvig Bohnstedt. With his support Baumanis undertook studies in the Bauakademie in Berlin (1860–62) and in the St. Petersburg Academy of Arts (1862–65). After that he was a government architect in Livland (now Vidzeme) until he established his own practice in Riga.

His main professional activity was in relation to the former defensive walls of Riga. The walls, built of sand, were demolished in the mid-19th century and a new string of boulevards was planned. He designed 40% of the buildings in this area. His buildings were mostly eclectic (a combination of Neo-Renaissance and Neo-Gothic elements) in design, with refined details and well-executed plastic forms.

He also designed the Alexanders Gymnasium (a secondary school) in Riga, now the Latvian Academy of Music, in 1870-75.

From 1887 to 1888 Baumanis was responsible for the building of the Riga Regional Court at 34 Brīvības Blvd. In its construction Baumanis drew on both Classical and Baroque influences for the façades. The structure won him considerable acclaim not only for the exterior but also for the interior design. [2]

Altogether he designed more than 150 buildings in Riga.

The history of Latvia began around 9000 BC with the end of the last glacial period in northern Europe. Ancient Baltic peoples arrived in the area during the second millennium BC, and four distinct tribal realms in Latvia's territory were identifiable towards the end of the first millennium AD. Latvia's principal river Daugava, was at the head of an important trade route from the Baltic region through Russia into southern Europe and the Middle East that was used by the Vikings and later Nordic and German traders.

The year 1834 in architecture involved some significant architectural events and new buildings.

The year 1891 in architecture involved some significant architectural events and new buildings.

Limbaži is a town in the Vidzeme region of northern Latvia. Limbaži is located 90 km northeast of the capital Riga. The population is 8705 people. During the Middle Ages, as part of Livonia, Limbazi was a fortified town with stone walls, second in importance only to Riga.

The Great Cemetery was formerly the principal cemetery of Riga in Latvia, established in 1773. It was the main burial ground of the Baltic Germans in Latvia.

Wilhelm Ludwig Nikolai Bockslaff was a Baltic German architect working in Riga. He is considered one of the most important representatives of Eclecticism, Neo-Gothic and Art Nouveau styles in the city. He is noted in particular for his construction of churches. 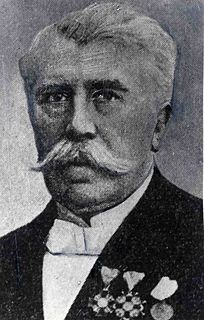 Johann Daniel Felsko was a Baltic German architect, urban planner and the chief architect of Riga for 35 years in the period 1844—79. The most significant accomplishment of his creative work is the development of the center of Riga.

Karl Johann Felsko was an architect and son of chief architect of Riga Johann Daniel Felsko. He was one of the leading architects during the building boom in Riga in the late 19th and early 20th century. There were more than 115 multi-story apartment and public buildings, factories and other buildings built following his designs. He was a master of Eclecticism style. His work, primarily seen in apartment buildings in Riga, included carefully placed filigree elements of order, cornices, pediments, garlands, cartouches, herms and more. His productivity decreased a great deal at the beginning of the 20th century with the introduction of Art Nouveau.

Konstantīns Pēkšēns is one of the most prominent Latvian architects of all times. After Jānis Baumanis he is the epitome of the second generation of Latvian architects. Many Latvian cities and towns take pride in buildings designed by Pēkšēns, but Riga alone can boast more than 250 multi-storey brick buildings and a great number of wooden houses erected following his designs.

Heinrich Karl Scheel was a Baltic German architect who lived and worked in Riga. He is considered one of the greatest 19th century Riga architects and has designed more than 40 public and private buildings there.

The House of the Livonian Noble Corporation is a historical building in Riga, Latvia, constructed to house the Landtag of the Livonian Noble Corporation in the Governorate of Livonia. Designed by architects Robert Pflug and Jānis Frīdrihs Baumanis, it was opened in 1867 and housed the Landtag until Latvian independence in 1919, and was subsequently damaged by fire in 1921. Today it is home to the Saeima, the parliament of Latvia. It is located in UNESCO listed Old Riga, directly opposite St. James's Cathedral. The architectural style is neo-Renaissance. 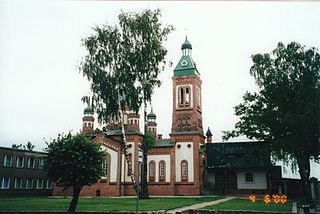 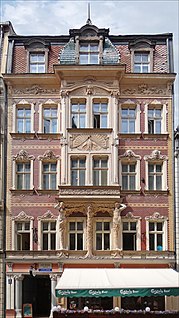 The Art Nouveau architecture in Riga makes up roughly one third of all the buildings in the centre of Riga, making Latvia's capital the city with the highest concentration of Art Nouveau architecture anywhere in the world. Built during a period of rapid economic growth, most of Riga's Art Nouveau buildings date from between 1904 and 1914. The style is most commonly represented in multi-storey apartment buildings. Stylistic influences derived not least from present-day Austria, Finland and Germany, while the establishment of a faculty of architecture in Riga in 1869 was instrumental in providing a local cadre of architects. This included, but was not limited to, some of the first formally trained ethnic Latvian architects. As elsewhere, the Art Nouveau movement in Riga was driven by a desire to express greater individuality, local attachment and a more rational kind of architecture than that which had dominated during the 19th century. Stylistically, the Art Nouveau architecture of Riga can be further divided into four different stages: Eclectic, Perpendicular, National Romantic; and Neo-Classical.

Mārtiņš Nukša was a Latvian diplomat and architect. He worked as an architect in Riga during the heyday of Art Nouveau architecture and from 1920 as a diplomat representing Latvia. He was arrested by Soviet authorities after the occupation of Latvia and executed in 1942.