"J'Accuse...!" (French pronunciation: ​ [ʒ‿a.kyz] ; "I Accuse...!") was an open letter published on 13 January 1898 in the newspaper L'Aurore by the influential writer Émile Zola. In the letter, Zola addressed President of France Félix Faure and accused the government of anti-Semitism and the unlawful jailing of Alfred Dreyfus, a French Army General Staff officer who was sentenced to lifelong penal servitude for espionage. Zola pointed out judicial errors and lack of serious evidence. The letter was printed on the front page of the newspaper and caused a stir in France and abroad. Zola was prosecuted for libel and found guilty on 23 February 1898. To avoid imprisonment, he fled to England, returning home in June 1899.

Other pamphlets proclaiming Dreyfus's innocence include Bernard Lazare's A Miscarriage of Justice: The Truth about the Dreyfus Affair (November 1896). As a result of the popularity of the letter, even in the English-speaking world, J'accuse! has become a common expression of outrage and accusation against someone powerful. [1] [2]

Alfred Dreyfus was a French army officer from a prosperous Jewish family. [3] In 1894, while an artillery captain for the General Staff of France, Dreyfus was suspected of providing secret military information to the German government. [3]

The bordereau had been torn into six pieces, and had been found by Madame Bastian in the wastepaper basket of Maximilian von Schwartzkoppen, the German military attaché. [4] When the document was investigated, Dreyfus was convicted largely on the basis of testimony by professional handwriting experts: [5] the graphologists asserted that "the lack of resemblance between Dreyfus' writing and that of the bordereau was proof of a 'self-forgery,' and prepared a fantastically detailed diagram to demonstrate that this was so." [6] There were also assertions from military officers who provided confidential evidence. [5]

Dreyfus was found guilty of treason in a secret military court-martial, during which he was denied the right to examine the evidence against him. The Army stripped him of his rank in a humiliating ceremony and shipped him off to Devil's Island, a penal colony located off the coast of French Guiana in South America. [4]

At this time, France was experiencing a period of anti-Semitism, and there were very few outside his family who defended Dreyfus. Nevertheless, the initial conviction was annulled by the Supreme Court after a thorough investigation. In 1899, Dreyfus returned to France for a retrial, but although found guilty again, he was pardoned. [4] In 1906, Dreyfus appealed his case again, and obtained the annulment of his guilty verdict. In 1906, he was also awarded the Cross of the Légion d'honneur, which was for “a soldier who has endured an unparallelled martyrdom". [5]

Émile Zola was born on 2 April 1840 in Paris. [7] Zola's main literary work was Les Rougon-Macquart , a monumental cycle of twenty novels about Parisian society during the French Second Empire under Napoleon III and after the Franco-Prussian War. [7] He was also the founder of the Naturalist movement in 19th-century literature. [7] Zola was among the strongest proponents of the Third Republic and was elected to the Légion d'honneur . [7]

Zola risked his career in January 1898 when he decided to stand up for Alfred Dreyfus. Zola wrote an open letter to the President of France, Félix Faure, accusing the French government of falsely convicting Alfred Dreyfus and of anti-Semitism. [7] His intention was to draw the accusation so broadly that he would essentially force men in the government to sue him for libel. Once the suit was filed, the Dreyfusards (supporters of Dreyfus) would have the opportunity to acquire and publicize the shaky evidence on which Dreyfus had been convicted. Zola titled his letter "J’Accuse" (French for "I Accuse"), which was published on the front page of Georges Clemenceau's liberal Paris daily L'Aurore. [7]

Émile Zola argued that "the conviction of Alfred Dreyfus was based on false accusations of espionage and was a misrepresentation of justice." [7] He first points out that the real man behind all of this is Major du Paty de Clam. Zola states: "He was the one who came up with the scheme of dictating the text of the bordereau to Dreyfus; he was the one who had the idea of observing him in a mirror-lined room. And he was the one whom Major Forzinetti caught carrying a shuttered lantern that he planned to throw open on the accused man while he slept, hoping that, jolted awake by the sudden flash of light, Dreyfus would blurt out his guilt." [8]

Next, Zola points out that if the investigation of the traitor was to be done properly, the evidence would clearly show that the bordereau came from an infantry officer, not an artillery officer such as Dreyfus. [8]

Zola argues Dreyfus's innocence can be readily inferred from the circumstances when he states: "These, Sir, are the facts that explain how this miscarriage of justice came about; The evidence of Dreyfus's character, his affluence, the lack of motive and his continued affirmation of innocence combine to show that he is the victim of the lurid imagination of Major du Paty de Clam, the religious circles surrounding him, and the 'dirty Jew' obsession that is the scourge of our time." [8]

After more investigation, Zola points out that a man by the name of Major Esterhazy was the man who should have been convicted of this crime, and there was proof provided, but he could not be known as guilty unless the entire General Staff was guilty, so the War Office covered up for Esterhazy.

At the end of his letter, Zola accuses General Billot of having held in his hands absolute proof of Dreyfus's innocence and covering it up. [8] He accuses both General de Boisdeffre and General Gonse of religious prejudice against Alfred Dreyfus. [8] He accuses the three handwriting experts, Messrs. Belhomme, Varinard and Couard, of submitting false reports that were deceitful, unless a medical examination finds them to be suffering from a condition that impairs their eyesight and judgment. [8]

Zola's final accusations were to the first court martial for violating the law by convicting Alfred Dreyfus on the basis of a document that was kept secret, and to the second court martial for committing the judicial crime of knowingly acquitting Major Esterhazy. [8]

Trial of Zola and aftermath

Zola was brought to trial for libel for publishing his letter to the President, and was convicted two weeks later. He was sentenced to jail and was removed from the Légion d'honneur . [7] To avoid jail time, Zola fled to England, and stayed there until the French Government collapsed; he continued to defend Dreyfus. [7]

Four years after the letter was published, Zola died from carbon monoxide poisoning caused by a blocked chimney. On 4 June 1908, Zola's remains were laid to rest in the Panthéon in Paris. [7] In 1953, the newspaper Liberation published a death-bed confession by a Parisian roofer that he had murdered Zola by blocking the chimney of his house. [9]

Subsequent use of the term 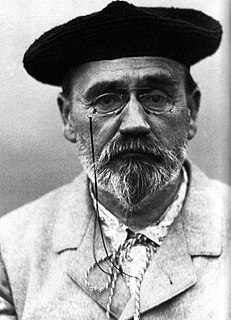 Émile Édouard Charles Antoine Zola was a French novelist, journalist, playwright, the best-known practitioner of the literary school of naturalism, and an important contributor to the development of theatrical naturalism. According to major Zola scholar and biographer Henri Mitterand, "Naturalism contributes something more than realism: the attention brought to bear on the most lush and opulent aspects of people and the natural world. The realist writer reproduces the object's image impersonally, while the naturalist writer is an artist of temperament." He was a major figure in the political liberalization of France and in the exoneration of the falsely accused and convicted army officer Alfred Dreyfus, which is encapsulated in the renowned newspaper headline J'Accuse…! Zola was nominated for the first and second Nobel Prize in Literature in 1901 and 1902. 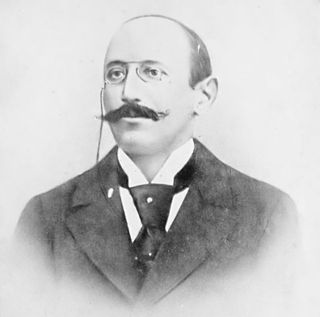 The Dreyfus affair was a political scandal that divided the Third French Republic from 1894 until its resolution in 1906. "L'Affaire", as it is known in French, has come to symbolise modern injustice in the Francophone world, and it remains one of the most notable examples of a complex miscarriage of justice and antisemitism. The role played by the press and public opinion proved influential in the conflict.

Alfred Dreyfus was a French artillery officer of Jewish ancestry whose trial and conviction in 1894 on charges of treason became one of the most controversial and polarizing political dramas in modern French history. The incident has gone down in history as the Dreyfus Affair, the reverberations from which were felt throughout Europe. It ultimately ended with Dreyfus's complete exoneration. Charles Marie Ferdinand Walsin Esterhazy was an officer in the French Army from 1870 to 1898. He gained notoriety as a spy for the German Empire and the actual perpetrator of the act of treason of which Captain Alfred Dreyfus was wrongfully accused and convicted in 1894.

An open letter is a letter that is intended to be read by a wide audience, or a letter intended for an individual, but that is nonetheless widely distributed intentionally.

J'Accuse…! is an 1898 open letter by Émile Zola concerning the Dreyfus affair. 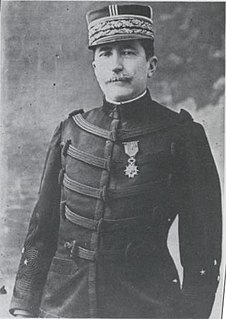 Marie-Georges Picquart was a French army officer and Minister of War. He is best known for his role in the Dreyfus Affair. 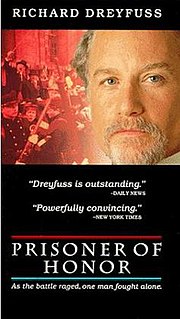 Prisoner of Honor is a 1991 British made-for-television drama film directed by Ken Russell and starring Richard Dreyfuss, Oliver Reed and Peter Firth. It was made by Warner Bros. Television and distributed by HBO, and centers on the famous Dreyfus Affair. Richard Dreyfuss co-produced the film with Judith James, from a screenplay by Ron Hutchinson.

Hubert-Joseph Henry was a French Lieutenant-Colonel in 1897 involved in the Dreyfus affair. Arrested for having forged evidence against Alfred Dreyfus, he was found dead in his prison cell. He was considered a hero by the Anti-Dreyfusards. 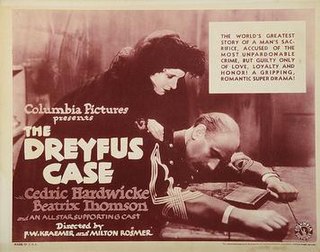 Dreyfus is a 1931 British film on the Dreyfus affair, translated from the play by Wilhelm Herzog and Hans Rehfisch and the 1930 German film Dreyfus. It features George Zucco in his film debut.

I Accuse! is a British-American 1958 CinemaScope biographical drama film directed by and starring José Ferrer. The film is based on the true story of the Dreyfus Case, in which a Jewish captain in the French Army was falsely accused of treason.

Lucie Dreyfus-Hadamard, was the wife of Alfred Dreyfus, and his main and unwavering support during the Affair that shook the couple from 1894 to 1906. She never ceased to defend the honor of her husband.

Auguste Mercier was a French general and Minister of War at the time of the Dreyfus Affair. 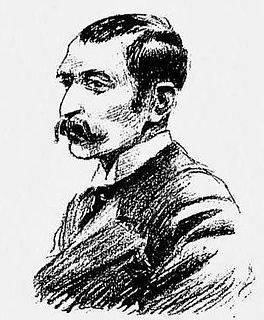 Mathieu Dreyfus (1857–1930) was an Alsatian Jewish industrialist and the older brother of Alfred Dreyfus, a French military officer falsely convicted of treason in what became known as the Dreyfus affair. Mathieu was one of his brother's most loyal supporters throughout the affair. 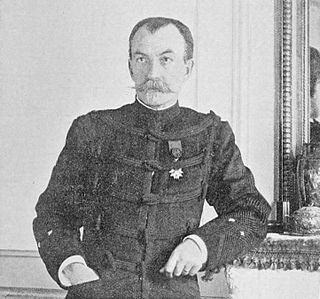 George Gabriel de Pellieux was a French army officer who was best known for ignoring evidence during the Dreyfus affair, a scandal in which a Jewish officer was convicted of treason on the basis of a forgery.