Only players who played for the team in the match. 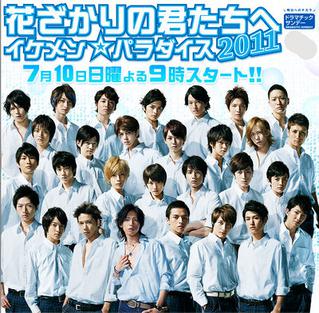 Hanazakari no kimitachi e 〜Ikemen Paradice〜 2011 (花ざかりの君たちへ〜イケメン☆パラダイス〜2011) is a 2011 Japanese television series. It is a remake of the 2007 drama series of the same name which is also based on the manga Hana Kimi, but it featured an entirely new cast.

Takuya Kinoshita is a professional Japanese baseball player. He plays catcher for the Chunichi Dragons.

All Out!! is a Japanese manga series written by Shiori Amase. It began serialization in Kodansha's magazine Monthly Morning Two in November 2012 and finished in November 2019. It has been collected into sixteen tankōbon volumes. A drama CD adaptation is bundled with the release of the limited edition of the eighth tankōbon and first tankōbon reprint in February 2016. An anime television series adaptation by Madhouse and TMS Entertainment aired from October 7, 2016 to March 31, 2017.

GirlsAward 2015 Spring/Summer is a fashion and music event held on April 29, 2015 at Yoyogi National Gymnasium 1st Gymnasium in Tokyo, Japan. The main MCs were Ryōta Yamasato and Naomi Watanabe. In this event, Funassyi, the mascot character of Funabashi city, appeared again.

Ultraman Taiga The Movie is a 2020 Japanese superhero kaiju film, serving as the sequel and film adaptation of the 2019 Ultra Series television series Ultraman Taiga. The film originally scheduled to release in Japanese theaters on March 6, 2020 but was withdrawn at the height of COVID-19 pandemic. A month after Japan lifted the state of emergency, the film was given a new release date of August 7, 2020.

Kōmyō ga Tsuji (功名が辻) is a 2006 Japanese historical television series and the 45th NHK taiga drama. It is written by Shizuka Ōishi, based on the 1965 novel of the same name by Ryōtarō Shiba. The series chronicles the lives of Chiyo and Yamauchi Kazutoyo, a couple who lived during the Sengoku period of Japan.