J. B. Lippincott & Co. was an American publishing house founded in Philadelphia, Pennsylvania in 1836 by Joshua Ballinger Lippincott. It was incorporated in 1885 as J. B. Lippincott Company. [1] : 26–29

Joshua Ballinger Lippincott (March 18, 1813 – January 5, 1886) [2] founded the publishing company in Philadelphia when he was 23 years old. J. B. Lippincott & Co. began business publishing Bibles and prayer books before expanding into history, biography, fiction, poetry, and gift books. The company later added almanacs, medicine and law, school textbooks, and dictionaries. In 1849, Lippincott acquired Grigg, Elliot & Co., a significant publisher and wholesaler whose origins dated back to printer and bookseller Benjamin and Jacob Johnson in 1792. In 1850 J. B. Lippincott & Co. became Lippincott, Grambo & Co. but reverted to its former name in 1855. The company was incorporated in 1878 as J. B. Lippincott Company. Lippincott published the first textbook of nursing in the US in 1878 and the first issue of the American Journal of Nursing in 1900. [3] By the end of the 19th century, Lippincott was one of the largest and best-known publishers in the world. [1] : 16  Lippincott's Monthly Magazine , a popular periodical containing a complete novel, short stories, poetry, and opinion, was published in the US and the UK from 1868 to 1914. During the 20th century Lippincott also became a major publisher of schoolbooks for elementary and high school education and of references, textbooks, and journals in medicine and nursing. [1] : 44–48  In 1961, Lippincott acquired the religious publisher A. J. Holman. [4]

In 1978, J. B. Lippincott Company was acquired by Harper & Row Publishers, Inc. A. J. Holman was sold to the Sunday School Board of the Southern Baptist Convention in 1979. [5] Lippincott's trade, juvenile and elementary and high school divisions were merged into Harper's. The remaining publishing activities, in medicine, nursing, and allied health, were combined with Harper's programs to form "J.B. Lippincott - the Health Professions Publisher of Harper & Row". In 1990, Lippincott was acquired by Wolters Kluwer N.V. of The Netherlands. J. B. Lippincott Company celebrated its 200th anniversary in 1992. [1] : 44–48 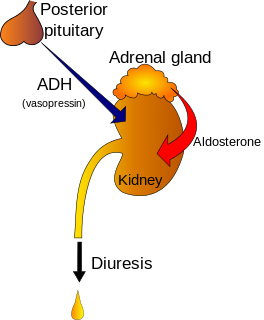 Polyuria is excessive or an abnormally large production or passage of urine. Increased production and passage of urine may also be termed diuresis. Polyuria often appears in conjunction with polydipsia, though it is possible to have one without the other, and the latter may be a cause or an effect. Primary polydipsia may lead to polyuria. Polyuria is usually viewed as a symptom or sign of another disorder, but it can be classed as a disorder, at least when its underlying causes are not clear.

Nursing theory is defined as "a creative and rigorous structuring of ideas that project a tentative, purposeful, and systematic view of phenomena". Through systematic inquiry, whether in nursing research or practice, nurses are able to develop knowledge relevant to improving the care of patients. Theory refers to "a coherent group of general propositions used as principles of explanation".

A contraction stress test (CST) is performed near the end of pregnancy to determine how well the fetus will cope with the contractions of childbirth. The aim is to induce contractions and monitor the fetus to check for heart rate abnormalities using a cardiotocograph. A CST is one type of antenatal fetal surveillance technique.

A suprapubic cystostomy or suprapubic catheter (SPC) is a surgically created connection between the urinary bladder and the skin used to drain urine from the bladder in individuals with obstruction of normal urinary flow. The connection does not go through the abdominal cavity.

In psychiatry, thought withdrawal is the delusional belief that thoughts have been 'taken out' of the patient's mind, and the patient has no power over this. It often accompanies thought blocking. The patient may experience a break in the flow of their thoughts, believing that the missing thoughts have been withdrawn from their mind by some outside agency. This delusion is one of Schneider's first rank symptoms for schizophrenia. Because thought withdrawal is characterized as a delusion, according to the DSM-IV TR it represents a positive symptom of schizophrenia. 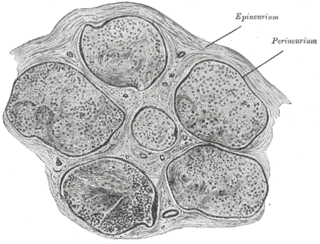 A funiculus is a small bundle of axons, enclosed by the perineurium. A small nerve may consist of a single funiculus, but a larger nerve will have several funiculi collected together into larger bundles known as fascicles. Fascicles are bound together in a common membrane, the epineurium. 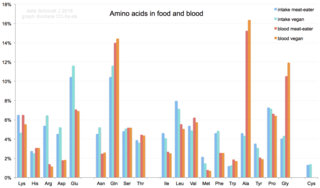 Aminoaciduria occurs when the urine contains abnormally high amounts of amino acids. In the healthy kidney, the glomeruli filter all amino acids out of the blood, and the renal tubules then reabsorb over 95% of the filtered amino acids back into the blood.

Lippincott Williams & Wilkins (LWW) is an imprint of the Dutch publishing conglomerate Wolters Kluwer. It was established by the acquisition of Williams & Wilkins and its merger with J.B. Lippincott Company in 1998. Under the LWW brand, Wolters Kluwer, through its Health Division, publishes scientific, technical, and medical content such as textbooks, reference works, and over 275 scientific journals. Publications are aimed at physicians, nurses, clinicians, and students.

Vasa nervorum are small arteries that provide blood supply to peripheral nerves, specifically to the interior parts of nerves, and their coverings.

The Credé maneuver is a technique used to void urine from the bladder of an individual who, due to disease, cannot do so without aid. The Credé maneuver is executed by exerting manual pressure on the abdomen at the location of the bladder, just below the navel. Patients can learn to perform the maneuver on themselves as it is simple to do. The method is also used in obstetrics to aid the body in expelling the placenta after childbirth.

Lippincott may refer to:

Fields Virology is an English-language virology textbook, originally it was published in two volumes and edited by Bernard N. Fields. The first edition in 1985 was called Virology, but from the second edition, the book's title was changed to Fields Virology. The book is widely regarded as an influential work on the subject and is cited as the bible of virology by many virologists.

AEIOU-TIPS is a mnemonic acronym used by some medical professionals to recall the possible causes for altered mental status. Medical literature discusses its utility in determining differential diagnoses in various special populations presenting with altered mental status including infants, children, adolescents, and the elderly. The mnemonic also frequently appears in textbooks and reference books regarding emergency medicine in a variety of settings, from the emergency department and standard emergency medical services to wilderness medicine.

EmanuelRubin was an American pathologist known for his contributions to the study of liver disease, cardiomyopathy and alcoholic tissue injury, and as the editor of Rubin’s Pathology, a medical textbook first published in 1988, now in its eighth edition.