Bell was a major general in the Regular United States Army, commanding the Department of the East, with headquarters at Governors Island, New York at the time of his death in 1919. He entered West Point in 1874, and graduated 38th in a class of 43 in 1878, with a commission as second lieutenant of the 9th Cavalry Regiment, a black unit.

Bell was born to John Wilson and Sarah Margaret Venable (Allen) Bell in Shelbyville, Kentucky. His mother died when he was young. Thereafter the two most important women in his life were the black woman who looked after him as a child and the white woman who became his step-mother. [1]

During the American Civil War, Shelby County was split between Union and Confederate factions. The extended Bell family was strongly in favor of the secession. After the firing on Fort Sumter, John Wilson Bell and his brothers drew lots to determine who would remain at home to look after their parents and who would join the Southern armies. John lost and remained at home. Young James Franklin, "Frank" as he was known to family and friends, thus grew up in a milieu in which slavery was not only accepted and practiced but strongly defended.

Bell attended the public schools in Shelbyville. Until he was sixteen, he also worked on his father's farm six days a week with breaks only for school and the Sabbath. In the process, he developed a strong physical constitution that stood him in good stead for the remainder of his life. In 1872 he began working as a clerk in a general store owned by one of his uncles. His chief recreations were baseball and horse racing. One neighbor later remembered Frank and a friend tearing down country lanes on horseback "as if the Devil" was after them. [2]

Working in a general store did not appeal to such a high spirited young person, and in 1874 he secured appointment to West Point. During his four years at the Military Academy, he excelled in art, horsemanship, demerits, and making friends. He graduated 38th in a class of 43. The War Department assigned him to the 9th Cavalry, one of the black units formed after the Civil War. Then in Kentucky on home leave, Bell attempted to resign his commission. This, in fact, was illegal, but someone at the War Department understood the attitudes that were behind this action and assigned him to the all-white 7th Cavalry. He joined the unit at Fort Abraham Lincoln, Dakota Territory, on October 1, 1878. [3]

Bell became an instructor of military science and tactics and taught mathematics at Southern Illinois University, a position held from 1886 until 1889. While in Illinois, he read law and passed the Illinois bar. In 1889, he returned to the 7th Cavalry. Although the regiment participated in the Wounded Knee Massacre in South Dakota, Bell was on personal leave and did not participate. He was promoted to first lieutenant on December 29, 1890, and participated in the Pine Ridge, South Dakota campaign in 1891. Later that year, the 7th Cavalry was posted to Fort Riley, Kansas, and Bell joined the staff of the Cavalry and Light Artillery School. He soon became adjutant, then secretary of the school. In November 1894, Bell became aide-de-camp to General James W. Forsyth and posted to the Department of California. He was transferred to Fort Apache, Arizona Territory, in July 1897 and then to Vancouver Barracks, Washington, in February 1898.

At the outbreak of the Spanish–American War, Bell was acting as adjutant to General Forsyth, then commanding the Department of the West, with headquarters at San Francisco. He was immediately commissioned Colonel of Volunteers, and authorized to organize a regiment. This regiment was ordered to the Philippines and, under his command, saw service in the Philippine–American War.

Bell was awarded a Medal of Honor for his actions of September 9, 1899 near Porac on Luzon Island in the Philippines. According to the official citation, "while in advance of his regiment [Bell] charged 7 insurgents with his pistol and compelled the surrender of the captain and 2 privates under a close fire from the remaining insurgents concealed in a bamboo thicket." [4]

In July 1903, Bell was transferred to Fort Leavenworth, Kansas, where he headed the Command and General Staff School until April 14, 1906; Bell was promoted major general, and was appointed Chief of the Army General Staff. He served for four years, under Presidents Theodore Roosevelt and William Howard Taft. Bell was the first chief officer of the United States Army in 45 years who had not served in the American Civil War.

When the United States military forces of the Western Pacific concentrated in the Philippines, he returned to Manila in 1911, as military commander, until war with Mexico seemed imminent. He was then ordered home to take command of the 4th Division. The 4th Division remained in Texas City as reserve and, although at several times he seemed about to cross the Rio Grande, he was never a part of the Mexican expeditionary force.

After the Mexican situation quieted, Bell was relieved of the 4th Division, and placed in command of the Department of the West. He remained in command at San Francisco, where he had once been acting adjutant, until the United States entered World War I.

In the early spring of 1917, Bell was transferred to the Department of the East at Fort Jay, Governors Island, in New York City, and as commander of that department, assuming responsibility for Officers' Training Camps created by his predecessor, Leonard Wood, at Plattsburgh, Madison Barracks, and Fort Niagara. Bell's aide, Captain George C. Marshall, was most directly involved in the logistical support for these camps, battling a lethargic army supply system to properly equip the volunteer citizen soldiers. These camps, in August 1917, graduated the large quota of new officers needed for the new National Army and, to a large extent, to officer the new divisions of the east and northeast.

In the same month, Bell was offered and promptly accepted the command of the 77th Division of the National Army, to be organized at Camp Upton, New York. The division was intended to primarily manned by draftees from New York state and featured the Statue of Liberty on its unit patch. Bell commanded the division when the first newly appointed officers climbed the hill and reported to their first assignment, through that formative stage when barracks were thrown together at a miraculous speed, and being filled at the same rate. Then, in December, he sailed for France to make a tour of the front, and observe, first hand, actual fighting conditions. He did not return until the latter part of March 1918.

On his return, Bell failed the physical examination required for active service overseas. When the doctors decreed that he would not take the 77th Division to France, Bell was again given command of the Department of the East, and returned to his old headquarters, Governors Island, which command he held until his death in January 1919.

While in advance of his regiment charged 7 insurgents with his pistol and compelled the surrender of the captain and 2 privates under a close fire from the remaining insurgents concealed in a bamboo thicket.

Lucius Roy Holbrook was a major general who commanded the United States Army's Philippine Department from 1936 to 1938.

George Grunert was a United States Army cavalry officer who worked his way up through the ranks from private to retirement as a lieutenant general. His 47-year career extended from the Spanish–American War to the end of World War II.

Lieutenant General Arthur MacArthur Jr. was a United States Army general. He became the military Governor-General of the American-occupied Philippines in 1900 but his term ended a year later due to clashes with the civilian governor, future-U.S. President William Howard Taft.

Theodore Schwan was a Union Army officer during the American Civil War who received the Medal of Honor for his actions at the Battle of Peebles' Farm. He also served with distinction during the Spanish–American and Philippine–American Wars. 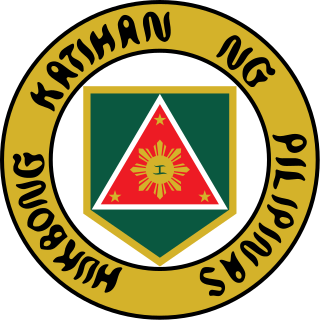 Matthew Arlington Batson was a United States Army Officer who received the Medal of Honor for actions during the Philippine–American War. 1st Lieutenant Batson was awarded the medal for swimming the San Juan River under enemy fire. He was awarded his medal alongside Captain Hugh J. McGrath who performed the same feat. Batson is most noted, however, for creating the Philippine Scouts.

Robert Charlwood Richardson Jr. was born in Charleston, South Carolina, on October 27, 1882, and was admitted as a cadet at the United States Military Academy on June 19, 1900. His military career spanned the first half of the 20th Century. He was a veteran of the 1904 Philippine insurrection, World War I, and World War II. He commanded the U.S. Army, Pacific during the height of World War II in 1943 until his retirement in 1946. During that time he was also the military governor of Hawaii and Commanding General of U.S. Army Forces in the Pacific Ocean Areas.

Colonel William Remsburg Grove was an American soldier who received the Medal of Honor. During the Philippine–American War, he charged against a group of rebels and assisted his commanding officer in killing or capturing all of them while armed with only a pistol. For this he was awarded the Medal of Honor in 1902.

Omar Bundy was a career United States Army officer. He attained the rank of major general, and was a veteran of the American Indian Wars, Spanish–American War, Philippine–American War, Pancho Villa Expedition, and World War I. 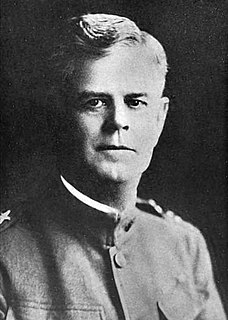 William Hampden Sage was a major general in the United States Army and a Medal of Honor recipient for his actions during the Battle of Zapote Bridge on 13 June, 1899 during the Philippine–American War.

John Chowning Gresham was an officer in the United States Army who was a recipient of the Medal of Honor for his actions during the Indian Wars.

Henry Pinckney McCain was an officer in the United States Army who served as Adjutant General of the U.S. Army from 1914 to 1918.

Charles Dudley Rhodes was a United States Army Major General. He was a prominent commander of cavalry units from the Indian Wars through World War I, and was a lecturer and author.

Walter Henry Gordon was a decorated officer in the United States Army with the rank of major general. A veteran of Philippine–American War, he is most noted for his service as Commanding general, 6th Infantry Division during the Meuse-Argonne Offensive in late 1918. 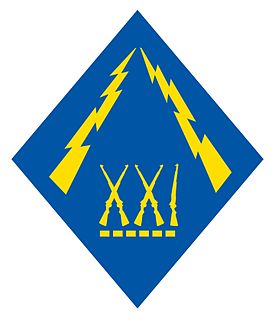 The 21st Infantry Division was a division of the Philippine Army under the United States Army Forces in the Far East (USAFFE). The unit was involved in the delaying action against the Japanese invasion in the plains of Central Luzon, and the Battle of Bataan in 1942.

Guy Carleton was a career officer in the United States Army. He attained the rank of major general, and is best known for his World War I command of Camp Wadsworth and the 96th Division. 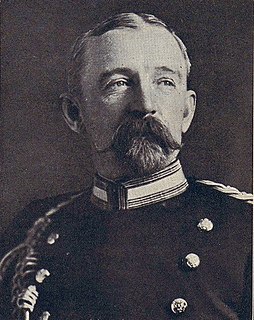 Julius A. Penn was a career officer in the United States Army. He attained the rank of brigadier general during World War I, and commanded 170th Infantry Brigade, 85th Division and 76th Infantry Brigade, 38th Division, in addition to serving as Chief of the Personnel Bureau for the American Expeditionary Forces.

William Renwick Smedberg Jr. was a career officer in the United States Army. A veteran of the Spanish–American War, Philippine–American War, and World War I, he attained the rank of brigadier general and was most notable for his command of the 305th Infantry Regiment, 153rd Infantry Brigade, 63rd Infantry Brigade, Military District of Arizona, 8th Cavalry Regiment, and 2nd Cavalry Brigade.