Jacek Wojciech Gmoch (born 13 January 1939 in Pruszków) is a former Polish footballer, who later became a trainer and selector of the Polish National Team.

While having a successful football career he graduated in communication from the Warsaw University of Technology. Gmoch begun playing for Znicz Pruszków, to move on for a successful career in Legia Warsaw. With Legia, he won the Polish Cup twice (in 1964 and 1966) and contributed to the beginning of the successful 1968–69 season. He also became a player for the national Team of Poland (29 caps). [2]

Following a major injury in a friendly match, Gmoch began a coaching career, starting in Legia Warsaw in 1969–71. Having been offered the Poland National Team assistant's job by Kazimierz Górski, he lasted from 1971–74. Together they achieved an Olympic Gold medal in Munich 1972, as well as 3rd Place in the 1974 World Cup. He moved to the U.S. to follow his scientific career at the University of Pennsylvania (1975–6). He returned to qualify the National Team to 1978 Mundial in Argentina (fifth place). He later moved to Norway in 1979 and Greece until 2003 where he became one of the most successful and recognised coaches.

In Norway, he became Skeid Fotball manager and then he went to Greece and worked first as a manager of PAS Giannina, [3] [4] Apollon Athens, Larisa, [5] In 1983, he did his big step as a manager and became trainer of Panathinaikos. In his first season as Panathinaikos manager, his team won the Double and the following season, his team for second time in their history, reached the Semi finals of European Champions Cup, where they were eliminated by Liverpool. For the season 1985–86, he became coach of another great Greek club, AEK and the following season he became again trainer of Larisa and in 1988, his team won their first and only Greek Championship. After Larisa, he worked as a manager for Olympiacos and Aris Thessaloniki, in 1991 he went to Cyprus to become APOEL trainer, where his team won the championship and he remained there until the middle of the season 1992–93. Later, he worked for Athinaikos (1994–95), Ethnikos Piraeus (1995–96), Ionikos (1997–98), Kalamata (1998–99), Panionios (1999), and again for Ionikos in 2002–03.

He acted as a member of the Polish Olympic representation team in Athens 2004 Summer Olympics and later became a minor shareholder and President of Legia Warsaw, as well as following up a career in television commentating for several networks. He is currently commentating Champions League matches for the Greek Television.

On 15 November 2010, Gmoch took over as the caretaker manager of Panathinaikos, following Nikos Nioplias, who resigned after a string of mediocre results in the first part of the 2010–11 season. As caretaker manager he succeeded to win Iraklis in the only match before being succeeded by the new manager of the team. The score was 4–2 and everybody in the stadium goodbyed him again as a winner.

Władysław Jerzy Engel is a Polish former footballer and coach.

Michał Ryszard Żewłakow is a Polish former footballer defender who used to captain the Polish national football team and is its third most capped player ever for Poland. Besides Poland, he has played in Belgium, Greece, and Turkey.

Siniša Gogić is a football manager and former professional player who played as a striker.

Marinos Ouzounidis is a Greek former professional footballer who played as a centre-back.

The 2005–06 Alpha Ethniki was the 70th season of the highest football league of Greece and the last season under the name Alpha Ethniki, before then was renamed to Super League Greece. The season began on 27 August 2005 and ended on 13 May 2006. Olympiacos won their second consecutive and 34th Greek title. However, the season was somewhat overshadowed by the suspension of the Greek FA by UEFA, which jeopardized the European places of the Champions League, UEFA Cup, and Intertoto Cup qualifiers from Greece, as well as the use of Athens Olympic Stadium as the site of the 2006–07 Champions League final.

Wojciech Kowalczyk is a Polish retired footballer who played as a striker, currently working as a football expert.

Giorgos Donis is a Greek former professional footballer who played as a midfielder and currently a manager. He was the first ever Greek to play in the English Premier League. In England, he was also known as George Donis.

Miltiadis Sapanis is a Greek footballer, currently playing for Doxa Pentalofos in the Football League 2, as a midfielder.

Rafik Zoheir Djebbour is an Algerian retired professional footballer who played as striker and winger. 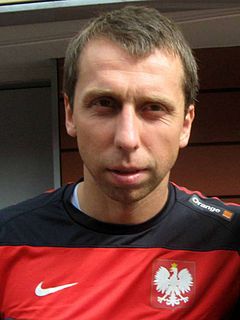 Jakub Wawrzyniak is a Polish former footballer. He usually played as a left-back or center-back. Earlier in his career, he also appeared a few times as a striker and as a midfielder.

Jacek Kazimierski is a Polish former professional footballer who played as a goalkeeper.

Iñaki Astiz Ventura is a Spanish footballer who plays for Polish club Legia Warsaw II as a central defender. 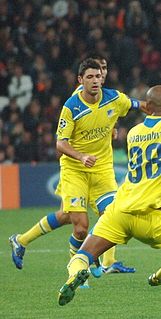 Hélio José Ribeiro Pinto is a Portuguese professional footballer who plays for Louletano D.C. as a central midfielder.

The 2006–07 season was Olympiacos's 48th consecutive season in the Super League Greece and their 10th consecutive season in the UEFA Champions League. Manager Trond Sollied left the club by mutual consent on December 29, 2006 due to the club's lower-than-expected performance of the team in the UEFA Champions League, and was replaced by Greek Takis Lemonis. 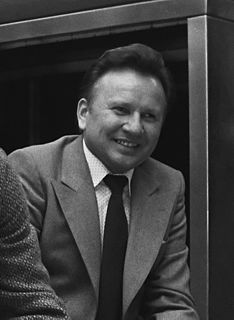 Ryszard Kulesza was a Polish footballer, coach and official, one of managers of the Poland national football team. His father was killed during the Warsaw Uprising, and Kulesza himself, who was 13, was lucky to survive, as a German soldier threw him under a passing tank. After the uprising, he was forcibly taken to Germany as Ost-Arbeiter, but escaped and returned to Poland on foot.

The 2006–07 season was Panathinaikos F.C.'s 49th consecutive season in Greek Super League. The club also participated in the Greek Cup and UEFA Cup. The season started with Hans Backe as team manager. 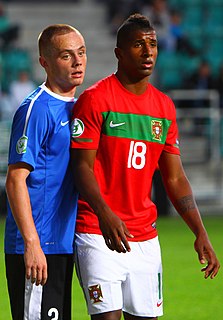 Carlos Miguel Ribeiro Dias, known as Cafú, is a Portuguese professional footballer who plays for English club Nottingham Forest as a midfielder.