Jack Anderson (born June 15, 1935) is an American poet, dance critic, and dance historian. [1] He is well known for his numerous reviews of dance performances in The New York Times and Dance Magazine as well as for his scholarly studies in dance history and for eleven volumes of poetry.

Jack Warren Anderson was born in Milwaukee, Wisconsin, where his father, George, was a motion picture projectionist at a downtown movie theater and his mother, Eleanore, was a hospital administrator. As a youth, Jack took piano lessons and acted in little theater groups before leaving home to go to college. At Northwestern University he earned a bachelor's degree with a major in theater and minors in English literature and philosophy, and at Indiana University he earned a master's degree in creative writing. [2] He pursued further graduate study at the University of California at Berkeley but abandoned it after a year when he got his first job with a newspaper.

In 1959, Anderson joined the staff of the Oakland Tribune , starting as a copy boy but becoming the assistant drama critic the next year. He also began writing dance criticism for the English monthly Ballet Today and contributing to Dance Magazine , the leading dance periodical in America. In 1964 Anderson moved to New York and joined the editorial staff of Dance Magazine, where he worked until 1970. After leaving his staff position he continued to contribute critical reviews of dance performances until 1978, when he became one of the three dance critics of The New York Times, along with Anna Kisselgoff and Jennifer Dunning. He remained in this prestigious post for many years, until 2005. He has since continued his affiliation with the Times, preparing listings and writing obituaries of notable figures in the dance world. Since 2007 Anderson has also reviewed dance for www.nytheatre-wire.com.

In 1970–71, while living in London with his partner, George Dorris, he served as the deputy dance critic to Oleg Kerensky (1930–1993) for the Daily Mail and occasionally appeared on the BBC radio show Kaleidoscope , talking about dance, and in 1972 he became the New York correspondent for The Dancing Times of London. In acknowledgment of his expertise, he was asked to serve on the dance panel of the National Endowment for the Arts from 1975 to 1978.

Largely self-taught as a dance historian, at a time when there were no established programs in dance history, Anderson began writing and teaching dance history during the 1970s. In 1977 he and George Dorris became the founding co-editors of the scholarly journal Dance Chronicle: Studies in Dance and the Related Arts. [3] Together, they made it one of the leading periodicals of dance history, with high standards of scholarship. After many successful years, they passed it on to younger editors in 2007.

From the 1970s through the 1990s, Anderson undertook various research projects in dance history and eventually produced seven books on various subjects:

His comprehensive and detailed account of the Ballet Russe de Monte Carlo, which flourished in the United States from 1938 until the early 1960s, won the 1981 José de la Torre Bueno Prize for the best English-language writing in dance history, and his concise history of ballet and modern dance, published in 1986, was so popular with general readers and as a textbook for students that a second edition was issued in 1992.

Throughout his adult life, Anderson has been drawn to poetic expression. In 1969 he published the first two of his ten books of poetry. His poems have also appeared in many literary magazines and anthologies, and one of his prose poems provided the title for the anthology The Party Train (Minneapolis: New Rivers Press, 1995). He has been a visiting writer at the College of DuPage in Illinois, a poet-in-residence at the University of Kansas, and reader of his poems at various colleges and cultural centers in the United States, Canada, England, and Australia.

Anderson's published collections of poems are as follows:

In recognition of the excellence of his work, Anderson received both a National Endowment for the Arts creative writing fellowship and a National Endowment literary award. [4] He has also enjoyed the approval and recognition of fellow poets. Morton Marcus (1936–2009), for one, offered the following encomium: "Jack Anderson's prodigious imagination creates alternate realities as easily as if they were prefabricated worlds, but so close to our own are they in every wickedly funny and poignant detail that we soon realize we've not been looking out a window but at a mirror. . . . His pictures of the life we lead are satiric gems, yet so consummate an artist is he that at each thrust of his sardonic wit the reader can do nothing but laugh uproariously and demand more." [5]

Jack Anderson and George Dorris, a dance scholar and retired professor of English, have been life partners for many years. Having known each other slightly at Northwestern University, they met again in 1965 on the subway platform at Lincoln Center after a New York City Ballet performance. Together, they have traveled widely and become friends with dance writers and scholars in many countries around the world. They were married in Toronto in 2006. [6]

Gerald Daniel Stern was an American poet, essayist, and educator. The author of twenty collections of poetry and four books of essays, he taught literature and creative writing at Temple University, Indiana University of Pennsylvania, Raritan Valley Community College and the Iowa Writers' Workshop. From 2009 until his death, he was a distinguished poet-in-residence and faculty member of Drew University's graduate program for a Master of Fine Arts (MFA) in poetry.

Edwin Frank Ochester is an American poet and editor.

Charles North is an American poet, essayist and teacher. Described by the poet James Schuyler as “the most stimulating poet of his generation,” he has received two National Endowment for the Arts Creative Writing Fellowships, a Foundation for Contemporary Arts Grants to Artists award (2008), four Fund for Poetry awards, and a Poets Foundation award.

Lynn Collins Emanuel is an American poet. Some of her poetry collections are Then, Suddenly— and Noose and Hook.

Selma Jeanne Cohen was a historian, teacher, author, and editor who devoted her career to advocating dance as an art worthy of the same scholarly respect traditionally awarded to painting, music, and literature. She was the founding editor of the six-volume International Encyclopedia of Dance, completed in 1998.

Michael Steven Harper was an American poet and English professor at Brown University, who was the Poet Laureate of Rhode Island from 1988 to 1993. His poetry was influenced by jazz and history.

Maggie Anderson is an American poet and editor with roots in Appalachia.

Joan Larkin is an American poet and playwright. She was active in the small press lesbian feminist publishing explosion in the 1970s, co-founding the independent publishing company Out & Out Books. She is now in her fourth decade of teaching writing. The science fiction writer Donald Moffitt was her brother.

Jack Agüeros was an American community activist, poet, writer, and translator, and the former director of El Museo del Barrio. 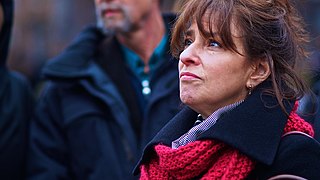 Donna Masini is a poet and novelist who was born in Brooklyn and lives in New York City.

Reginald Shepherd was an American poet, born in New York City and raised in the Bronx. He died of cancer in Pensacola, Florida, in 2008.

Joanna Furhman is an American poet and professor. She is the author of six collections of poems and her poems have appeared in literary magazines and journals, as well as in anthologies. Fuhrman is a member of the Alice James Books Cooperative Board, and poetry editor for Boog City, a community newspaper for the Lower East Side in New York.

R. Zamora Linmark, born in Manila, is a Filipino American poet, novelist, and playwright. He earned a bachelor's degree from the University of Hawaii in Honolulu. He is the recipient of a Japan-United States Friendship Commission, a winner of a National Endowment for the Arts creative writing fellowship in poetry (2001), and was a Fulbright Foundation Senior Lecturer/Researcher in the Philippines (2005-2006). He was a Distinguished Visiting Professor in Creative Writing at the University of Hawaii and University of Miami. His works include Prime-Time Apparitions (2005), The Evolution of a Sigh (2008), Drive-By Vigils (2011), Rolling the R’s (1995), Leche (2011), and The Importance of Being Wilde at Heart (2019); themes involving ethnic and sexual identity are common throughout.

Robert Hershon was an American poet and the author of thirteen books.

Tony Towle is an American poet. He began writing poetry in 1960. John Ashbery has referred to him as "one of the New York School's best-kept secrets."

Pablo Medina is a Cuban American poet and novelist, Professor in the Department of Writing, Literature, and Publishing at Emerson College and Director of its MFA Program.

George Dorris is an American dance historian, educator, editor, and writer. As managing editor of Dance Chronicle for thirty years, he laid foundations and established standards for dance scholarship not only in the United States but in many other countries of the world. In 2007, he was honored with a lifetime membership in the Society of Dance History Scholars and by the award for Outstanding Service to Dance Research presented by the Congress on Research in Dance.

Mark Statman is an American writer, translator, and poet. He is Emeritus Professor of Literary Studies at Eugene Lang College the New School for Liberal Arts in New York City, where he taught from 1985 to 2016. He has published 11 books, 6 of poetry, 3 of translation, and 2 on pedagogy and poetry. His writing has appeared in numerous anthologies and reviews.