Born in Denaby, near Conisbrough, England, [2] [3] Barker was a centre half who played youth football with Denaby Rovers in the Rawmarsh League while working full-time as a miner. [4] His career nearly finished before it had barely started after he suffered a thigh injury at the pit [5] following a roof collapse. [4] He joined Midland League side Denaby United for one season, before he signed for Derby County for £200 in May 1928. [4] He played in their great pre-war team under George Jobey when Derby were rarely outside the top six. Barker represented Derby in 327 league games but never won any silverware with the club. [5]

However, his form earned Barker 11 caps for England. Barker won his first cap against Wales on 29 September 1934. [3] His second game was the infamous Battle of Highbury in a hotly contested and violent match against Italy. Over the next two years he played nine more times both in friendlies and the British Home Championship. In his final game for England he was made captain against Wales on 17 October 1936. [3]

After retiring from Derby County, Barker joined the Army Physical Training Corps before being appointed Bradford City manager in May 1946 taking charge of the team's first season following World War Two. He was steering City to a high position in Division Three (North) when he resigned in January 1947 after just eight months in charge. His reign was the shortest in City's history at the time. [5]

He had a brief spell in charge of Irish club, Dundalk before he returned to Derby to work for Rolls-Royce. He moved to be trainer-coach at Oldham Athletic in 1948. [5]

In November 1953, he returned to football management at Derby County to replace Stuart McMillan. The club had lost its international players and in 1954–55 the side were relegated to Division Three (North) for the first time in its history.

Barker resigned to go back to work in Derby, as a fitter's mate at the Carriage and Wagon railway works in Derby. [5]

Barker died in 1982 just before his 76th birthday following a fight against cancer and a spinal problem. [5]

Dean Nicholas Saunders is a Welsh football manager and former professional footballer who played as a striker in a career which lasted from 1982 until 2001. 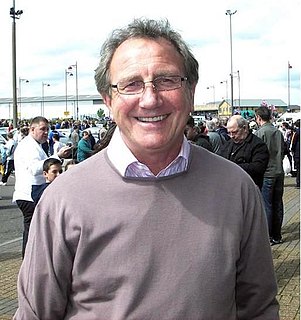 Kevin James Hector is an English former footballer who scored 268 goals from 662 appearances in the Football League playing for Bradford Park Avenue and Derby County. His 486 League appearances for Derby County is a club record. He also played in the North American Soccer League for the Vancouver Whitecaps, and was capped twice for England.

William Henry Lucas was a Welsh international football player in the late 1940s and 1950s. During his career, Lucas made over 400 appearances in The Football League during spells with Swindon Town, Swansea Town and Newport County and attained seven caps for Wales as well as eight wartime caps. After his retirement from playing, he went on to manage two of his former clubs, Newport County and Swansea Town.

William Charles Harris was a Welsh footballer, who played for his national side and Middlesbrough and later became a manager.

Aubrey Scriven was an English professional footballer who played as an outside left for Birmingham, Bradford City and Bristol City in the Football League. He also played non-league football for Warmsworth, Denaby United, Worcester City and Brierley Hill Alliance.

George Charles Whitcombe was a Welsh footballer. He also captained Wales at baseball, winning a total of five caps.

Gary David Bowyer is an English professional football coach and former professional player. As a player, he made 52 league appearances in a professional career that lasted eight years, before retiring due to injury in 1997, aged 25. He went on to coach at a number of clubs, and has managed Blackburn Rovers, Blackpool, and Bradford City.

Richard "Dickie" Morris was a Welsh footballer who played as an inside forward. He made 87 appearances in the Football League for Liverpool, Leeds City and Grimsby Town. He also played in the Southern League for Plymouth Argyle and Reading. He was capped eleven times by the Wales national team, scoring one goal. Morris served the British Army as a soldier during the Second Boer War. 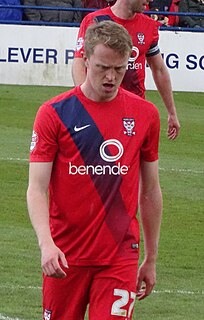 Luke John Hendrie is an English professional footballer who plays as a defender for League Two club Grimsby Town.

John Wright was an English footballer who made 37 appearances in the Football League for Darlington, playing mainly as a left half. He was on the books of Hartlepools United and Derby County without playing for either in the League, and joined Midland League club Denaby United just before the start of the Second World War.