John Fairbrother (16 August 1917 – October 1999, born in Burton upon Trent, Staffordshire) [1] was an English professional football goalkeeper, best known for his time at Newcastle United shortly after the Second World War where he won a FA Cup winners medal in the 1951 cup final against Blackpool. His uncle George Harrison played for Everton and England. 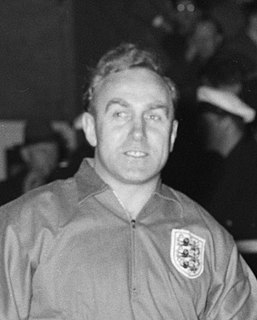 William Ambrose Wright CBE, was an English footballer, who played as a centre half. He spent his entire club career at Wolverhampton Wanderers. The first footballer in the world to earn 100 international caps, Wright also holds the record for longest unbroken run in competitive international football. He also made a total of 105 appearances for England, captaining them a record 90 times, including during their campaigns at the 1950, 1954 and 1958 World Cup finals. 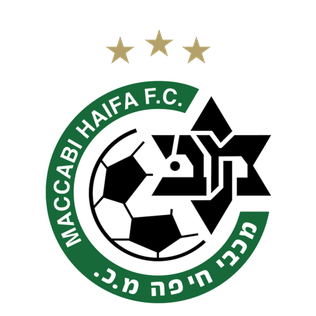 Maccabi Haifa Football Club is an Israeli professional football club, based in City of Haifa, a section of Maccabi Haifa sports club. The club plays in the Israeli Premier League. Maccabi Haifa home games are played at Sammy Ofer Stadium. The stadium, which is shared with rivals Hapoel Haifa, is the second largest in Israel football, with a capacity of 30,780. Maccabi Petah Tikva F.C. is an Israeli football club based in the city of Petah Tikva. It is part of the Maccabi sports club. The team promoted to first division at 2019/20 after only one season in second division. 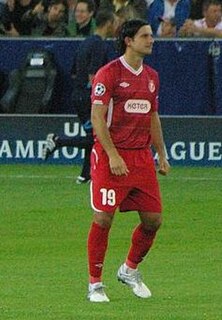 Avraham "Avi" Cohen was an Israeli footballer who played as a defender, and a manager. He was best known for his spells playing for two British clubs: Liverpool in England and Rangers in Scotland. After retirement from active football and management, he was the chairman of the Israel Professional Footballers Association for over five years until he was killed in a motorcycle crash. after his death Maccabi Tel Aviv retired the number 5 that he formerly wore.

Hapoel Petah Tikva F.C. is an Israeli football club based in the city of Petah Tikva. Their most successful period was the late 1950s and early 1960s, in which the club won six championships, five of them in consecutive seasons. Although they have not won the title since 1963, Hapoel still hold the record for the number of back-to-back titles. The club's last piece of major silverware came in 2005 when they won the Toto Cup, and of all the clubs to have won the State Cup, Hapoel have the worst record in the finals, having won on only two of their nine appearances in the final. 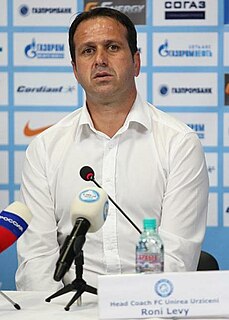 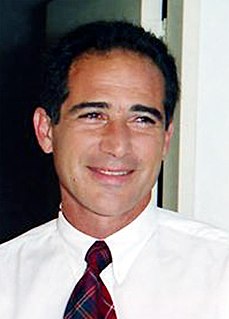 Giora Spiegel, is an Israeli former footballer and coach. As a footballer, he holds the record for the longest Israeli international career, spanning 14 years and 357 days. 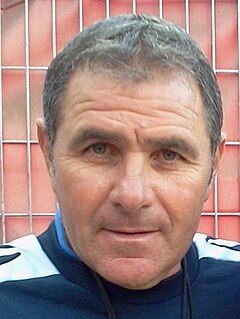 Israel "Eli" Guttman is an Israeli former football player and manager who most recently managed Maccabi Haifa, before officially announcing his retirement from the football world, stating health issues as the main reason. 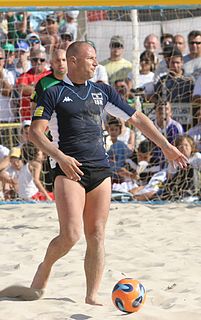 Itzik Zohar is a former Israeli international footballer and television sports personality. Born in Bat Yam, Israel to a family of North African extraction, he holds the distinction of scoring the first two goals for Israel in its first World Cup qualifier in the UEFA confederation on October 28, 1992. He is widely regarded as having been one of the best free kick takers in Israeli football.

Eliezer Spiegel was a footballer and manager, who played for Maccabi Petah Tikva, Beitar Tel Aviv and for the Israel national football team in the 1940s and 1950s.

Idan Tal is a former Israeli professional footballer who now works as a manager.

Shimon Ratner, also known as Shimon Leumi, and by the nickname "Lumek" was a Polish-born football player and coach, who coached the Mandatory Palestine national football team in 1934, taking control of them for their first ever match during the 1934 FIFA World Cup qualification campaign.

The 1958–59 Israel State Cup was the 21st season of Israel's nationwide football cup competition and the sixth after the Israeli Declaration of Independence.

Israel Halivner was a former Israeli footballer, who played for Maccabi Tel Aviv, and football manager. He was the head coach of Maccabi Tel Aviv when the club won its second Asian Club Championship.

Moshe Litvak was an Israeli footballer and manager. He is best known for his years at Maccabi Rehovot where he started his managerial career. He also played 6 official matches for the national team between 1949 and 1954.

Avraham Bendori was an Israeli footballer who played for Maccabi Tel Aviv and the Israeli national team. He later worked as a manager.

John Fairbrother is an English former footballer who played as a centre forward. He scored 153 goals from 352 appearances in the Football League playing for Watford, Peterborough United, Northampton Town, Mansfield Town and Torquay United. He also played in the Southern League for Worcester City, Bath City and Barnet, and continued his non-league football career with Hemel Hempstead, Berkhamsted Town and Leverstock Green.