Hartman played basketball and football collegiately at Oklahoma State University with his basketball tutelage under famed coach Henry Iba. After college, he played quarterback in the CFL before becoming a basketball coach. After leading the Coffeyville (Kansas) Junior College basketball team to the NJCAA National Championship with a 32-0 season in 1962, he took his high-octane offense to Southern Illinois University, replacing the successful Harry Gallatin, who had taken the head coaching job with the St. Louis Hawks. In 1967, passing up the NCAA Division II tournament after two successive second-place finishes, Hartman's Salukis won the NIT Championship, which was much more highly regarded then than it is today. He led Southern Illinois University into Division I before taking over at Kansas State when Cotton Fitzsimmons left to coach in the NBA. [1]

In 1996, when Kansas State fired its women's coach for NCAA violations, Hartman came out of retirement to coach the team for its last seven games, winning three. [2]

Hartman died in 1998. [3] He has a street near Bramlage Coliseum named "Jack Hartman Drive" after him. His wife, Pat, still lives in Manhattan, Kansas. His daughter, Jackie, also lives in Manhattan and served as the Chief of Staff for the President of Kansas State University. [4]

*1976–77 record reflects one win by forfeit over Minnesota.

Billy Eugene Self Jr. is an American basketball coach. He is the head men's basketball coach at the University of Kansas, a position he has held since 2003. During his 18 seasons as head coach, he has led the Jayhawks to 15 Big 12 regular season championships, including a share of an NCAA record 14 consecutive Big 12 regular season championships (2005–2018). He has also led the Jayhawks to three NCAA Final Four appearances, and the 2008 NCAA championship. Self was inducted into the Naismith Memorial Basketball Hall of Fame in 2017. Self, as of the end of the 2020–21 season, has the 19th most wins among Division I coaches in NCAA history and 6th among active head coaches. He is the second-winningest coach in Kansas history, behind only Hall of Famer Phog Allen. 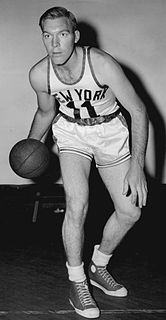 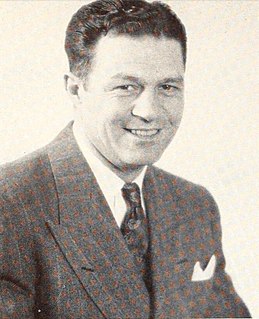 James H. Gardner was an American college basketball coach, known for his tenures as the head coach at Kansas State University and the University of Utah. He is a member of the Naismith Memorial Basketball Hall of Fame. 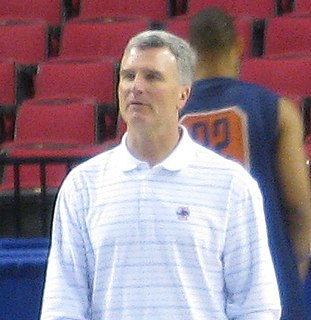 The Sunflower Showdown is the series of athletic contests between Kansas State University and the University of Kansas athletic programs, most notably football and men's basketball. The name is derived from the official nickname for the state of Kansas: the Sunflower State.

The Illinois Fighting Illini men's basketball team is an NCAA Division I college basketball team competing in the Big Ten Conference. Home games are played at the State Farm Center, located on the University of Illinois Urbana-Champaign's campus in Champaign. Illinois has one pre-tournament national championship and one non-NCAA tournament national championship in 1915 and 1943, awarded by the Premo-Porretta Power Poll. Illinois has appeared in the NCAA Division I Men's Basketball Tournament 31 times, and has competed in 5 Final Fours, 9 Elite Eights, and has won 17 Big Ten regular season championships. 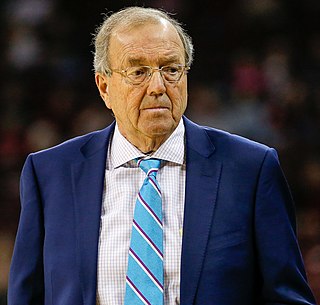 Richard F. Byrd is a retired American college basketball coach who served as the head coach of the Belmont Bruins men's basketball team from 1986-2019. On February 16, 2017, with the Bruins win over Eastern Kentucky, Byrd marked his 750th career win, 658 with Belmont. He retired after the 2018-2019 season with 805 wins, which ranks twelfth all-time among NCAA Division 1 men's basketball coaches.

Timothy Robert Jankovich is an American college basketball coach and head coach at Southern Methodist University. During his first year (2007–08) at Illinois State, Jankovich led the Redbirds to a 13–5 second-place finish in the Missouri Valley Conference – even though pre-season polls voted the team to be a fifth-place finisher. He was an assistant basketball coach at Kansas for four years, and served under current Kansas head coach Bill Self at Kansas and Illinois.

Rand Chappell is an American college basketball coach. He is the assistant head coach at Eastern Illinois University. Chappell has marked a career head coaching record of 358–203, led six teams to the NCAA Division II National Tournaments and won more than 20 games in each season for 12 consecutive years.

Robert Henry Gottlieb was an American basketball coach for the NCAA Division I University of Wisconsin–Milwaukee team from 1975–1980, and was also the head coach of Jacksonville University for two years prior. He was the father of basketball analyst and sports talk radio host Doug Gottlieb and Oregon State assistant coach Gregg Gottlieb.

The Kansas State Wildcats men's basketball team represents Kansas State University in college basketball competition. The program is classified in the NCAA Division I, and is a member of the Big 12 Conference. The current head coach is Bruce Weber. 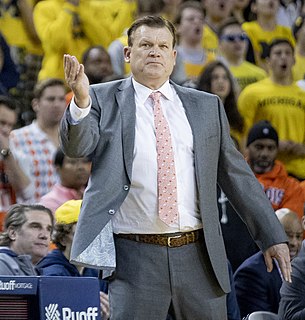