Jack Laurence Chalker (December 17, 1944 – February 11, 2005) was an American science fiction author. Chalker was also a Baltimore City Schools history teacher in Maryland for 12 years, retiring during 1978 to write full-time. He also was a member of the Washington Science Fiction Association and was involved in the founding of the Baltimore Science Fiction Society.

Chalker was born and raised in Baltimore, Maryland. Some of his books said that he was born in Norfolk, Virginia although he later claimed that was a mistake; he attended high school at the Baltimore City College. Chalker earned a BA degree in English from Towson University in Towson, Maryland, where he was a theater critic for the school newspaper, The Towerlight. During 2003, Towson University named Chalker their Liberal Arts Alumnus of the Year. He received a Master of Arts in Liberal Studies from Johns Hopkins University in Baltimore.

Chalker intended to become a lawyer, but financial problems caused him to become a teacher instead. He taught history and geography in the Baltimore City Public Schools from 1966 to 1978, most notably at Baltimore City College and the now defunct Southwest Senior High School. Chalker lectured on science fiction and technology at the Smithsonian Institution in Washington, D.C., the National Institutes of Health in Bethesda, Maryland, and numerous universities.

Chalker was married in 1978 and had two children, David, a game designer, and Samantha, a computer security consultant.

Chalker's hobbies included esoteric audio, travel, and working on science-fiction convention committees. He also had a great interest in ferryboats; at his fiancée's suggestion, their marriage was performed on the Roaring Bull boat, part of the Millersburg Ferry, in the middle of the Susquehanna River in Pennsylvania.

Chalker joined the Washington Science Fiction Association during 1958, and during 1963 he and two friends founded the Baltimore Science Fiction Society. Chalker attended every World Science Fiction Convention, except one, from 1965 until 2004. He published an amateur SF journal, Mirage, from 1960 to 1971 (a finalist nominee for the 1963 Hugo Award for Best Fanzine), [2] producing ten issues. Another journal, Interjection, was published 1968–1987 in association with the Fantasy Amateur Press Association. Chalker also initiated a publishing house, Mirage Press, Ltd., for releasing nonfiction and bibliographic works concerning science fiction and fantasy.

Chalker's awards included the Daedalus Award (1983), The Gold Medal of the West Coast Review of Books (1984), Skylark Award (1980), and the Hamilton-Brackett Memorial Award (1979). He was twice a nominee for the John W. Campbell Award for Best New Writer and for the Hugo Award twice. Chalker was posthumously awarded the Phoenix Award by the Southern Fandom Confederation on April 9, 2005.

Chalker was a three-term treasurer of the Science Fiction and Fantasy Writers of America. Chalker was also the co-author (with Mark Owings [3] ) of The Science Fantasy Publishers (third edition during 1991, updated annually), published by Mirage Press, Ltd, [4] a bibliographic guide to genre small press publishers which was a Hugo Award nominee during 1992. The Maryland Young Writers Contest, sponsored by the Baltimore Science Fiction Society, was renamed "'The Jack L. Chalker Young Writers Contest" effective April 8, 2006.

Chalker is best known for his Well World series of novels, but he also wrote many other novels (most, but not all, part of a series, or large novels which were split into 'series' by the publishers), and at least nine short stories.

Many of Chalker's works involve some physical transformation of the main characters. For instance, in the Well World novels, immigrants to the Well World are transformed from their original form to become a member of one of the 1,560 sentient species that inhabit that artificial planet. Another example would be that the Wonderland Gambit series resembles traditional Buddhist jataka-type reincarnation stories set in a science fiction environment. Samantha Chalker announced that Wonderland Gambit might be made into a movie, but supposedly its close resemblance to The Matrix resulted in the project being canceled. [5]

At the time of his death, Chalker left one unfinished novel, Chameleon. He was planning to write another novel, Ripsaw, after Chameleon.

On September 18, 2003, during Hurricane Isabel, Chalker passed out and was rushed to the hospital with a diagnosis of a coronary occlusion. He was later released, but was severely weakened. On December 6, 2004, he was again rushed to hospital with breathing problems and disorientation, and was diagnosed with congestive heart failure and a pneumothorax. Chalker was hospitalized in critical condition, then upgraded to stable condition on December 9, though he did not regain consciousness until December 15. After several more weeks in deteriorating condition and in a persistent vegetative state, with several transfers to different hospitals, Chalker died on February 11, 2005, of kidney failure and sepsis at Bon Secours Hospital in Baltimore, Maryland.

Some of Chalker's remains are interred in the family plot at Loudon Park Cemetery in Baltimore. The remainder were distributed off a ferry near Hong Kong, the ferry between Hainan Island and the Chinese mainland, a ferry in Vietnam, White's Ferry on the Potomac River in Virginia on Father's Day 2007, and on author H. P. Lovecraft's grave in Providence, Rhode Island on December 17, 2005.[ citation needed ] 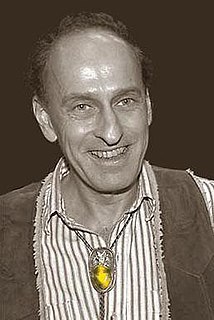 Roger Joseph Zelazny was an American poet and writer of fantasy and science fiction short stories and novels, best known for The Chronicles of Amber. He won the Nebula Award three times and the Hugo Award six times, including two Hugos for novels: the serialized novel ...And Call Me Conrad (1965), subsequently published under the title This Immortal (1966) and then the novel Lord of Light (1967). 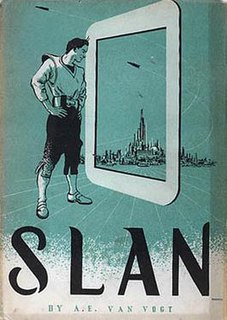 Slan is a science fiction novel by American-Canadian writer A. E. van Vogt, as well as the name of the fictional race of superbeings featured in the novel. The novel was originally serialized in the magazine Astounding Science Fiction. It was subsequently published in hardcover in 1946 by Arkham House, in an edition of 4,051 copies. In 2016, Slan was awarded the Retro-Hugo Award for Best Novel for 1941.

Donald M. Grant, Publisher, Inc. is a fantasy and science fiction small press publisher in New Hampshire that was founded in 1964. It is notable for publishing fantasy and horror novels with lavish illustrations, most notably Stephen King's The Dark Tower series and the King/Peter Straub novel The Talisman. 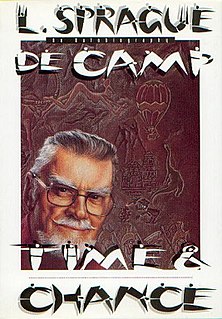 Time and Chance: an Autobiography is the autobiography of science fiction and fantasy writer L. Sprague de Camp, first published in hardcover by Donald M. Grant, Publisher, Inc. in 1996. An E-book edition was published by Gollancz's SF Gateway imprint on September 29, 2011, as part of a general release of de Camp's works in electronic form. 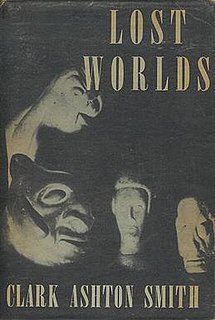 Lost Worlds is a collection of fantasy, horror and science fiction short stories by the American writer Clark Ashton Smith. It was published in 1944 and was the author's second book published by Arkham House. 2,043 copies were printed.

Tales of the Quintana Roo is a collection of fantasy stories by American author Alice Sheldon, writing as James Tiptree Jr. It was released in 1986 and was the author's first book published by Arkham House. It was published in an edition of 3,673 copies. The stories originally appeared in Isaac Asimov's Science Fiction Magazine and The Magazine of Fantasy & Science Fiction and are set in the easternmost shore of the Yucatán Peninsula in Mexico. In addition to winning the world fantasy award for best collection in 1987, each of the stories was nominated or won genre awards, and "What Came Ashore at Lirios" was included in the Oxford Book of Fantasy Stories.

The Mixed Men is a fix-up novel of science fiction short stories by Canadian-American writer A. E. van Vogt that focus on the mixed offspring of Dellian Supermen and human beings. The novel's title is taken from van Vogt's 1945 Astounding SF short story "Mixed Men", which was nominated for a Retro-Hugo Award in 1996. The stories published in the novel were originally released between the years of 1943 to 1945 in Astounding SF, with the novel being first published in a 5,000 copy printing in 1952 by Gnome Press and a 1955 Berkley Books edition under the title Mission to the Stars. 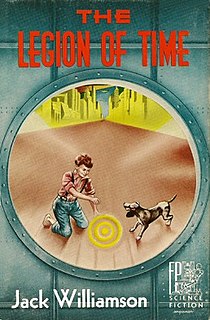 The Legion of Time is a collection of two science fiction novels by the American writer Jack Williamson. It was first published by Fantasy Press in 1952 in an edition of 4,604 copies. The novels were originally serialized in the magazines Astounding Science Fiction and Marvel Stories.

Operation: Outer Space is a science fiction novel by American writer Murray Leinster. It was first published in 1954 by Fantasy Press in an edition of 2,042 copies. 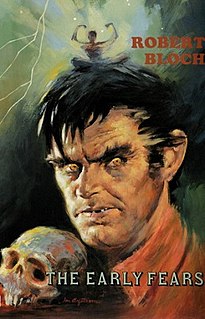 The Early Fears is a collection of fantasy and horror short stories by American writer Robert Bloch. It was released in 1994 by Fedogan & Bremer in an edition of 2,400 copies, of which 100 were signed by the author. The collection reprints the stories from Bloch's two earlier collections published by Arkham House, The Opener of the Way and Pleasant Dreams: Nightmares with three additional stories. The stories originally appeared in the magazines Unknown, Weird Tales, Amazing Stories, Strange Stories, Fantasy and Science Fiction, Beyond Fantasy Fiction, Fantastic, Imagination and Swank. The collection includes Bloch's 1959 Hugo Award winning story, "That Hell-Bound Train."

Adam Niswander was an American short story writer and novelist. He was a president of the Central Arizona Speculative Fiction Society and a member of the Horror Writers Association and the Science Fiction and Fantasy Writers of America. His first novel, The Charm, which is the first book of his Shaman Cycle was published by Integra Press in 1993. He died on 12 August 2012. 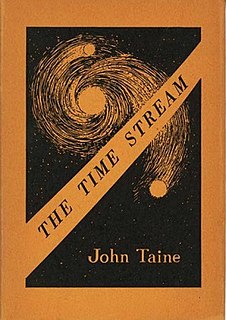 The Time Stream is a science fiction novel by American writer John Taine. The novel was originally serialized in four parts in the magazine Wonder Stories beginning in December 1931. It was first published in book form in 1946 by The Buffalo Book Company in an edition of 2,000 copies of which only 500 were ever bound. It is the first novel to see time as a flowing stream.

Exiles of Time is a science fiction novel by American writer Nelson S. Bond. It was first published in book form in 1949 by Prime Press in an edition of 2,112 copies, of which 112 were signed, numbered and slipcased. The novel first appeared in the magazine Blue Book in May 1940. 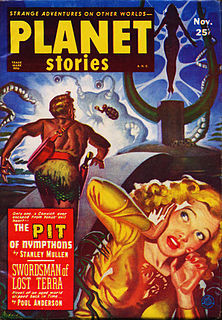 Stanley Mullen was an American artist, short story writer, novelist and publisher. He studied writing at the University of Colorado at Boulder and drawing, painting and lithography at the Colorado Springs Fine Arts Center where he was accepted as a professional member in 1937. A series of his paintings of Indian ceremonial dances is part of the permanent collection of the Denver Art Museum. Mullen worked as assistant curator of the Colorado State Historical Museum during the 1940s.

The Revenge of Dracula is a horror novel by British writer Peter Tremayne. It was first published in the United Kingdom in 1978 by Bailey Brothers & Swinfen. The first United States edition was published by Donald M. Grant, Publisher, Inc. in 1978 in an edition of 1,250 copies which were signed by the author and the illustrator, Dan Green. It is the second book in Tremayne's Dracula Lives trilogy.