Jack Leswick played 3½ seasons for the Duluth Hornets of the AHA. He spent the second half of 1932–33 playing for the Wichita Blue Jays. He began the 1934 season in the AHA playing for the Kansas City Greyhounds. Leswick was called up to the Chicago Black Hawks shortly after the beginning of the 1934 season. He played 37 games, scoring 1 goal and 7 assists and was assessed 16 penalty minutes (PIM), as Chicago won the Stanley Cup championship that spring. Leswick wore uniform #9 with the Chicago Black Hawks.

Leswick died in the off-season after the 1933-34 season. His body was found in the Assiniboine River without his wallet or other valuables. Leswick's death was ruled either a suicide or accident by the Winnipeg Coroner. [1]

The 1926–27 NHL season was the tenth season of the National Hockey League. The success of the Boston Bruins and the Pittsburgh Pirates led the NHL to expand further within the United States. The league added three new teams: the Chicago Black Hawks, Detroit Cougars and New York Rangers, to make a total of ten, split in two divisions. This resulted in teams based in Canada being in the minority for the first time. To stock the teams with players the new teams brought in players from the Western Hockey League, which folded in May 1926. This left the NHL in sole possession of hockey's top players, as well as sole control of hockey's top trophy, the Stanley Cup, which was won by the Ottawa Senators. This was the original Senators' eleventh and final Stanley Cup win. The Senators' first was in 1903.

Martin James "Goal-a-Game" Barry was a Canadian professional ice hockey forward who played for the New York Americans, Boston Bruins, Detroit Red Wings and Montreal Canadiens in the National Hockey League (NHL) between 1927 and 1940. Barry was frequently among the league's leading scorers and after winning his first Stanley Cup with the Red Wings in 1936, he scored the championship winning goal in 1937. Barry won the Lady Byng Trophy in 1936–37 as the NHL's most gentlemanly player and was named to the First All-Star Team. Following his playing career, Barry coached junior and senior teams in Halifax, Nova Scotia for many years. He was inducted into the Hockey Hall of Fame in 1965.

John Sherratt "Black Jack" Stewart was a Canadian professional ice hockey defenceman who played 12 National Hockey League (NHL) seasons for the Detroit Red Wings and Chicago Black Hawks. He won two Stanley Cup championships with the Red Wings and was named to the post-season NHL All-Star Team on five occasions: three times on the first team and twice on the second. Stewart also played in the first four NHL All-Star Games. After completing his NHL career as captain of the Black Hawks, he went on to coach numerous teams at various levels of hockey.

The 1951–52 NHL season was the 35th season of the National Hockey League. The Detroit Red Wings won the Stanley Cup by sweeping the Montreal Canadiens four games to none.

The 1931–32 NHL season was the 15th season of the National Hockey League (NHL). The Ottawa Senators and Philadelphia Quakers suspended operations, leaving eight teams to play 48 games each. In the Stanley Cup Finals, the Toronto Maple Leafs swept the New York Rangers in three games to win the franchise's third Stanley Cup championship.

Carl Sidney "Cully" Dahlstrom was an American professional ice hockey center who played eight seasons in the National Hockey League (NHL) for the Chicago Black Hawks. He won the Calder Memorial Trophy as the league's top rookie for the 1937–38 season and won the Stanley Cup in the same season. He played 342 career NHL games, scoring 88 goals and 118 assists for 206 points. In 1973 he was elected to the United States Hockey Hall of Fame.

Peter Joseph Babando was an American born Canadian ice hockey player who played in the National Hockey League with all four of the United States-based Original Six teams.

Anthony Joseph Leswick was a Canadian ice hockey forward who played mostly for the New York Rangers and Detroit Red Wings of the NHL. Nicknamed "Tough Tony" and "Mighty Mouse", he was known also as a little pest. Little, because he stood just 5'7" tall and weighed 160 lbs. He is most famous for scoring the final goal in overtime of game seven of the 1954 Stanley Cup final.

Jerome Gerald "Topper" Toppazzini was a Canadian ice hockey forward who played twelve seasons in the National Hockey League, most notably for the Boston Bruins. A skilled defensive specialist and penalty killer, he set the then-NHL record for shorthanded goals in a season in 1958 with seven. 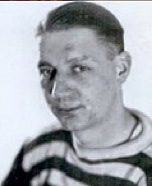 Joseph Albert Rosario "Rosie, Lolo" Couture was a professional ice hockey player. Couture was a right winger who played for the Chicago Black Hawks and the Montreal Canadiens from 1928 - 1936.

Desmond Patrick Smith was a Canadian ice hockey defenceman in the National Hockey League (NHL). He was the father of two sons Brian and Gary who also played in the NHL.