John George Peart (3 October 1888 – 3 September 1948) was an English footballer who played centre forward for 13 different teams, in a career which spanned World War I. After he retired he became a football manager until his death in 1948.

Peart was a centre forward who had a nomadic career. He played for eight league clubs in a career which spanned 19 years and every division of the English Football League. He also played non-league football in the Southern and Welsh leagues, as well as guesting for other clubs during the First World War. Peart was known as the 'most injured man in football', his worst injury being a broken leg in 1910 at Stoke which kept him out of football for two seasons. [2] As a manager, he spent a further 25 years in the Football League, and took charge at Rochdale, Bradford City, and Fulham. He won two minor league titles with Stoke, won the Second Division with Notts County in 1913–14, and led Rochdale to second place in the Third Division North in 1923–24 and 1926–27.

Peart left Adelaide South Shields to sign with First Division side Sheffield United in 1907. [3] He scored 50 goals for the reserve team in the 1907–08 season. [4] He hit eight goals in 27 league appearances, and helped the "Blades" finish 17th in 1907–08 and 12th in 1908–09. He then left Bramall Lane for Stoke in the Birmingham & District League in 1910. [3] He spent two years at the Victoria Ground and made an impressive contribution, scoring 34 goals in 23 matches in 1910–11, his run being ended by a broken leg against Crewe Alexandra on 10 December 1910. [3] He claimed hat-tricks against Dudley Town, Wolves Reserves, Treharris Athletic, and Kettering Town, and finished as the club's joint top-scorer (with Alf Smith) despite only playing in the first half of the season. His goals helped the "Potters" to secure the Birmingham & District League title and second place in the Southern League Division Two. After his recovery Peart scored seven goals in 24 games in 1911–12, before the directors decided to cash in on their most profitable player. [3]

He left the Potteries in March 1912 to return to top-flight football with Newcastle United, signing for a fee of £600. [4] Peart made 17 competitive appearances for the "Magpies", all in the Football League, comprising nine in 1911–12 and eight in 1912–13, and scored three goals in each of those seasons. His first appearance for the club came at St James' Park on 16 March 1912 against Middlesbrough, and he scored his first goal the following week against Notts County. [5]

He was sold to Notts County in February 1913, [6] and finished as the club's top-scorer in 1912–13 with just seven goals, as County were relegated into the Second Division. He hit 28 league goals in 1913–14 to fire the club to promotion as divisional champions – he was also the division's joint top-scorer, with Sammy Stevens. He scored 11 goals in 1914–15, to again finish as the club's top-scorer. In his six years at Meadow Lane he scored 51 goals in 82 league appearances. During World War I he served as a corporal in the Army and also guested for Rochdale, Leeds United, Stoke and Barnsley. [6] [7] He scored 71 goals in 107 appearances at Elland Road. [6]

After a time with Leeds City, he played three Second Division games for Birmingham in the 1919–20 season, before moving on to Derby County in January 1920. [6] He scored one goals in nine league games, before departing the Baseball Ground.

In 1920 he joined Ebbw Vale Steel & Iron Company as player-manager, though he resigned his post in January 1922, returning to the English Second Division with Port Vale. [1] Injury limited his contribution to the Vale's 1921–22 campaign to just seven appearances and he was released from his contract at The Old Recreation Ground in the summer. [1]

Peart was only 5 ft 10 in (1.78 m), but was physically imposing and was known as "the nightmare of goalkeepers". [4] However, he was also skilful, adept at flicking the ball on to his teammates despite his tendency to lose the ball by attempting to beat the entire defence by himself. [4] Despite his physique he was prone to injury. [4]

Peart spent a short period as player-manager at Ebbw Vale, before managing Rochdale from 1923 to 1930. He took the "Dale" to a second-place finish in the Third Division North in 1923–24; they were one point behind champions Wolverhampton Wanderers, but only Wolves were promoted. Rochdale then finished sixth in 1924–25, before finishing third in 1925–26, just two points behind champions Grimsby Town. They again narrowly missed out on promotion in 1926–27, after ending the campaign in second place, five points behind champions Stoke. The Spotland outfit then dropped to 13th in 1927–28, 17th in 1928–29 and tenth in 1929–30.

In 1935, he joined Fulham as manager, replacing Jimmy Hogan. [9] He took the club to the semi-finals of the FA Cup in 1935–36, where a 2–1 defeat to Sheffield United at Molineux cost them a place in the 1936 FA Cup Final. [4] He then led the "Cottagers" to mid-table finishes in the Second Division in the 1936–37, 1937–38, and 1938–39 campaigns. He remained in charge at Craven Cottage throughout World War II, and led the club to two further mid-table finishes in 1946–47 and 1947–48. He was still manager at the time of his death in September 1948, a month before his 60th birthday. The team he built went on to win the Second Division championship in the same season under the stewardship of director Frank Osborne. [10]

Peart was married to Margaret Joan Fraser; their son was the doctor and clinical researcher Sir Stanley Peart. [11] [12]

James Alfred McIntyre was an English footballer who became manager at Southampton, Coventry City and Fulham.

The 1967–68 season was the 69th completed season of the English Football League.

George Herbert Stabb was an English footballer who played for Torquay United, Notts County, Port Vale, and Bradford Park Avenue in the 1930s.

Joseph Alfred Schofield was an English footballer and football manager. 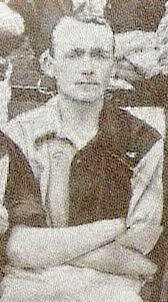 Adrian Capes, was an English footballer. A forward, he scored a total of 135 goals in 340 league and FA Cup games in a 17-year career with Nottingham Forest, Burton Wanderers, Burton Swifts, Burslem Port Vale, and Stoke. He also played cricket for Staffordshire in the 1900 Minor Counties Cricket Championship. After retiring in 1911, he worked behind the scenes at Port Vale from 1911 to 1934. His brother, Arthur, was also a professional footballer.

Alfred Bellis was an English footballer who played at outside left in the Football League for Port Vale, Bury, Swansea Town, and Chesterfield. He also played for Ellesmere Port Town, Rochdale, Notts County, Manchester United and Manchester City during World War II.

Samuel Jennings was an English footballer and football manager. A tall player, he was a goal-scoring centre-forward, with a ratio of a goal every two games.

David Brown was a Scottish footballer who played extensively in both England and Scotland. He played in the Football League for Barrow, Crewe Alexandra, Darlington, Notts County and Stoke. A centre-forward, he scored 39 league goals as Darlington won the Third Division North title in 1924–25.

The 1931–32 season was Port Vale's 26th season of football in the English Football League, and their second successive season in the Second Division. Aiming to build on their fifth place finish in 1930–31 and to win promotion, they finished in 20th place, only avoiding relegation on the last day thanks to their superior goal average – having a 0.048 better average than Barnsley. Their one highlight of the season was a 3–0 home win over rivals Stoke City that helped to deny Stoke a promotion place – however City comfortably took revenge at the last end of season North Staffordshire Infirmary Cup match, beating Vale 7–0. Manager Tom Morgan was also let go at this time, replaced by former manager Tom Holford. The season was notable for the debut of Tom Nolan, whose goalscoring exploits at the club would be a point of pride in an otherwise miserable pre-war period.