Jacob Christoph Le Blon, or Jakob Christoffel Le Blon, (2 May 1667 – 16 May 1741) was a painter and engraver from Frankfurt who invented the system of three- and four-colour printing, using an RYBK color model similar to the modern CMYK system.[2] He used the mezzotint method to engrave three or four metal plates (one each per printing ink) to make prints with a wide range of colours. His methods helped form the foundation for modern colour printing.

On his father’s side Le Blon descended from Huguenots fleeing France in 1576, having settled in Frankfurt. His grandfather Christof Le Blon married Susanna Barbara Merian daughter of the artist and engraver Matthäus Merian (1593–1650). Le Blon is reported to have received training as a young man from the Swiss painter and engraver Conrad Ferdinand Meyer (1618–1689) in Zurich but there is no documentary evidence.[1] It is generally agreed that Le Blon had an extended stay sometime between 1696 and 1702 in Rome where he is reported to have studied art under the painter Carlo Maratta (1625–1713). [2] There he became acquainted with the Dutch painter and engraver Bonaventura van Overbeek who created an extensive work of views of the antiquities of Rome, published posthumously in 1708 and containing a portrait of Overbeek attributed to Le Blon.[4] Encouraged by van Overbeek, Le Blon moved to Amsterdam, presumably in 1702, where he worked as a miniature painter and engraver. In 1705 he married Gerarda Vloet with whom he had two sons that appear to have died in infancy.

In 1707 Le Blon issued a short publication in Dutch on the forms of the human body.[5] In 1708 and 1709 he is known to have made colorant mixing experiments in Amsterdam and in 1710 he made his first color prints with yellow, red, and blue plates.[2] While in Amsterdam he became acquainted with Arnold Houbraken, who quoted him as a source of information on German painters for his Schouburg, [2] later published after Houbraken's death in 1718. Le Blon's wife died in 1716 and in 1717 he moved to London where he received royal patents for the three-color printing process and a three-color tapestry weaving process. The tapestry process involved using white, yellow, red, blue, and black fibers to create images.[3] The printing process involved using three different intaglio plates, inked in different colours. In 1722 he published a small book, Coloritto, in French and English.[6] In it he stated that “Painting can represent all visible objects with three colors, yellow, red, and blue” (pp. 6, 7). During his stay in England he produced several dozen of three- and four-colored images in multiple copies that initially sold well in England and on the continent. In the long run his enterprise did not succeed, however, and Le Blon left England in 1735, moving to Paris where he continued producing prints by his method. During his last years several sequences of prints were produced and sold showing the different steps of his printing process, such as a portrait of the French Cardinal de Fleury.[7] In 1740 he began work on a collection of anatomical prints for which he had a solid list of subscribers. When he died in 1741 in Paris he left a 4½ year-old daughter, Margueritte, as sole heir.[1] A detailed description of Le Blon’s work was published in 1756 by Antoine Gautier de Montdorge who befriended him during his final years in Paris.[8]

Le Blon’s method required experience in deconstructing a colored image into its presumed primary chromatic components and understanding the effects of superimposing printing inks in certain areas, for which extensive trial and error work was required. Le Blon’s process was practiced in France after his death and progressed in the early-mid-19th century into chromolithography. What was required, however, is a methodology to break images objectively into color components which became possible with the invention of color photography in the second half of the 19th century and the invention of half-tone printing in the late 19th century. 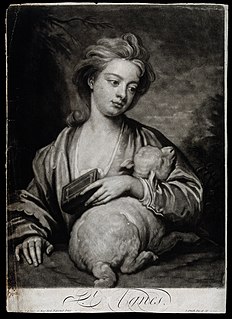 Mezzotint is a printmaking process of the intaglio family, technically a drypoint method. It was the first tonal method to be used, enabling half-tones to be produced without using line- or dot-based techniques like hatching, cross-hatching or stipple. Mezzotint achieves tonality by roughening a metal plate with thousands of little dots made by a metal tool with small teeth, called a "rocker". In printing, the tiny pits in the plate retain the ink when the face of the plate is wiped clean. This technique can achieve a high level of quality and richness in the print. 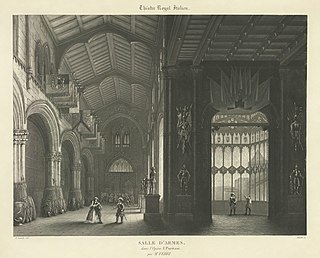 Aquatint is an intaglio printmaking technique, a variant of etching that only produces areas of tone rather than lines. For this reason it has mostly been used in conjunction with etching, to give outlines. It has also been used historically to print in colour, both by printing with multiple plates in different colours, and by making monochrome prints that were then hand-coloured with watercolour.

Romeyn de Hooghe was an important and prolific late Dutch Baroque, painter, sculptor, engraver and caricaturist. He was born in Amsterdam, and was a skilled etcher, draughtsman, painter, sculptor and medalist. He is best known for political caricatures of Louis XIV and propagandistic prints supporting William of Orange.

Maria Sibylla Merian was a German-born naturalist and scientific illustrator, a descendant of the Frankfurt branch of the Swiss Merian family. Merian was one of the first European naturalists to observe insects directly.

Viscosity printing is a multi-color printmaking technique that incorporates principles of relief printing and intaglio printing. It was pioneered by Stanley William Hayter. 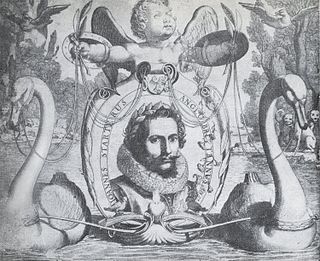 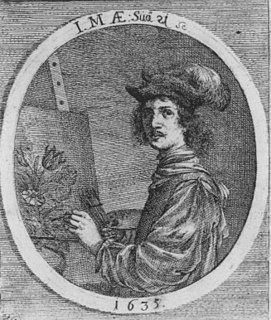 Jacob Marrel was a German still life painter active in Utrecht during the Dutch Golden Age. 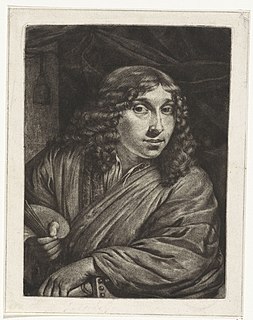 Jan Verkolje or Johannes Verkolje was a Dutch painter, draughtsman and engraver. He is mainly known for his portraits and genre pieces of elegant couples in interiors and, to a lesser extent, for his religious and mythological compositions. He was a gifted mezzotint artist. Trained in Amsterdam Verkolje spent his active professional career in Delft where he had access to powerful patrons.

Johannes or Johan Teyler was a Dutch Golden Age painter, engraver, mathematics teacher, and inventor of the color print.

Antonina Houbraken was an 18th-century Dutch draughtswoman who is known for her many topographical drawings of Dutch sites. She also drew landscapes. She is recorded as a skilled portraitist. 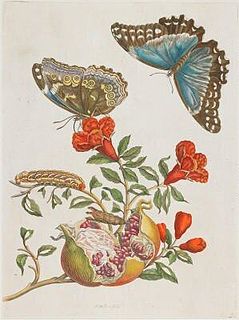 Joseph Mulder, was a Dutch Golden Age printmaker, known as a "renowned engraver".

Stipple engraving is a technique used to create tone in an intaglio print by distributing a pattern of dots of various sizes and densities across the image. The pattern is created on the printing plate either in engraving by gouging out the dots with a burin, or through an etching process. Stippling was used as an adjunct to conventional line engraving and etching for over two centuries, before being developed as a distinct technique in the mid-18th century.

The Great Theatre of Dutch Painters, or De groote schouburgh der Nederlantsche konstschilders en schilderessen, as it was originally known in Dutch, is a series of artist biographies with engraved portraits written by the 18th-century painter Arnold Houbraken. It was published in three volumes as a sequel to Karel van Mander's own list of biographies known as the Schilder-boeck. The first volume appeared in 1718, and was followed by the second volume in 1719, the year Houbraken died. The third and last volume was published posthumously by Houbraken's wife and children in 1721. This work is considered to be a very important source of information on 17th-century artists of the Netherlands. The Schouburg is listed as one of the 1000 most important works in the Canon of Dutch Literature from the Middle Ages to today.