Jacqueline Worms de Romilly (French:  [ʁɔmiji] ; née David, [1] 26 March 1913 – 18 December 2010) was a Franco-Greek philologist, classical scholar and fiction writer. She was the first woman nominated to the Collège de France, and in 1988, the second woman to enter the Académie française.

She is primarily known for her work on the culture and language of ancient Greece, and in particular on Thucydides.

Born in Chartres, Eure-et-Loir, she studied at the Lycée Molière. As a schoolgirl, she became the first female to qualify for a prize in the Concours général, taking the first prize in Latin to French translation and second prize in Ancient Greek in 1930. [2] She then prepared for the École Normale Supérieure at the Lycée Louis-le-Grand. She entered the class of 1933 of the ENS Ulm. She passed the agrégation in Classics in 1936; however, because she was of Jewish ancestry, the Vichy government suspended her from her teaching duties during the Occupation of France. [3] She became a doctor of letters at the University of Paris in 1947. Her doctoral thesis, a "masterful" [4] treatment of Athenian imperialism in Thucydides, was published as Thucydide et l'impérialisme athénien, and subsequently translated into English as Thucydides and Athenian Imperialism.

After being a schoolteacher, she became a professor at Lille University and subsequently at the Sorbonne, between 1957 and 1973. She later was promoted to the chair of Greek and the development of moral and political thought at the Collège de France — the first woman nominated to this prestigious institution. In 1988, she was the second woman (after Marguerite Yourcenar) to enter the Académie française, being elected to Chair #7, which was previously occupied by André Roussin.

She published dozens of works on Greek philosophy, language and literature but her lifelong passion was Thucydides, the historian of the Peloponnesian War.

Outside academia she was best known to the French public for touring French schools and giving talks about the culture of ancient Greeks. She was a staunch defender of teaching of humanities in French schools, believing that an understanding of the classics was essential to understanding democracy, the liberty of the individual and the virtue of tolerance. [5] In 1984 she published L’Enseignement en détresse, a book about declining standards in French schools. [6] Her position in the Académie française enabled her to mount a defence of classical languages and literary culture, which she stated “may well be as endangered as the fauna of the oceans or the water of our rivers”. [7]

She was horrified by the 1988 vote to simplify aspects of the French language in primary schools and in 1992 she founded an Association for the Defence of Literary Studies. [8]

In 1995, she obtained Greek nationality and in 2000 was named as an Ambassador of Hellenism by the Greek government. A one-time president of the Association Guillaume Budé, she remained an honorary president until her death at a hospital in Boulogne-Billancourt at the age of 97. [9]

De Romilly's two monographs on the ancient Greek historian Thucydides have been credited with "alter[ing] the landscape of Thucydidean scholarship" [12] and "the beginning of a new era". [13] In 2002, Danish classical scholar Anders Holm Rasmussen described her views on Thucydides' ideology of empire as still "one of the most important viewpoints" with which modern scholars can engage. [14] Published first in 1956, her work Histoire et raison chez Thucydide is still in print in the original French today, and was translated into English as The Mind of Thucydides after her death. [15] [16] De Romilly believed that Thucydides's intelligent, reflective approach held lessons relevant to the Europe of today.

De Romilly also published outside the field of Greek historiography. In recent years, the value of her work Time in Greek Tragedy has been recognized by scholars working not only on Greek drama but also on Aristotle's metaphysics of time. [17] [18]

In 2016, Rosie Wyles and Edith Hall edited a volume called Women Classical Scholars: Unsealing the Fountain from the Renaissance to Jacqueline de Romilly, a history of pioneering women born between the Renaissance and 1913 who played significant roles in the history of classical scholarship. [19]

De Romilly's father, a philosophy professor, was killed in action in the First World War when De Romilly was only one year old. Her mother was a novelist who published under the name Jeanne Maxime-David.

De Romilly's work was largely published in French, but some of her works were written in or translated into English: [23]

Thucydides was an Athenian historian and general. His History of the Peloponnesian War recounts the fifth-century BC war between Sparta and Athens until the year 411 BC. Thucydides has been dubbed the father of "scientific history" by those who accept his claims to have applied strict standards of impartiality and evidence-gathering and analysis of cause and effect, without reference to intervention by the deities, as outlined in his introduction to his work.

Anne Le Fèvre Dacier, better known during her lifetime as Madame Dacier, was a French scholar, translator, commentator and editor of the classics, including the Iliad and the Odyssey. She sought to champion ancient literature and used her great capabilities in Latin and Greek for this purpose as well as for her own financial support, producing a series of editions and translations from which she earned her living. She was the dedicatee of Gilles Ménage's Historia mulierum philosopharum, whose characterisation of her and of Anna Maria van Schurman was used to provide leading examples in treatises arguing for female education across the following centuries. 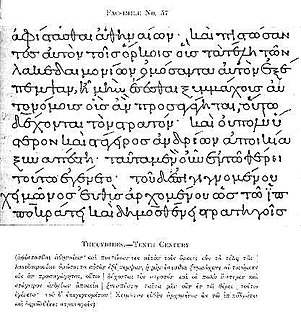 Isotta Nogarola (1418–1466) was an Italian writer and intellectual who is said to be the first major female humanist and one of the most important humanists of the Italian Renaissance. She inspired generations of artists and writers, among them Lauro Quirini and Ludovico Foscarini and contributed to a centuries-long debate in Europe on gender and the nature of woman. Her most influential work was a literary dialogue, De pari aut impari Evae atque Adae peccato written in 1451 in which she discussed the relative sinfulness of Adam and Eve. She argued that woman could not be held both to be weaker in nature and to be more culpable in original sin. Therefore, by a reductio ad absurdum argument women's weakness could be disproved. Nogarola also wrote Latin poems, orations, further dialogues, and letters, twenty-six of which survive.

Edith Hall is a British scholar of classics, specialising in ancient Greek literature and cultural history, and Professor in the Department of Classics and Centre for Hellenic Studies at King's College, London. From 2006 until 2011 she held a Chair at Royal Holloway, University of London, where she founded and directed the Centre for the Reception of Greece and Rome until November 2011. She resigned over a dispute regarding funding for classics after leading a public campaign, which was successful, to prevent cuts to or the closure of the Royal Holloway Classics department. She also co-founded and is Consultant Director of the Archive of Performances of Greek and Roman Drama at Oxford University, Chair of the Gilbert Murray Trust, and Judge on the Stephen Spender Prize for poetry translation. Her prizewinning doctoral thesis was awarded at Oxford. In 2012 she was awarded a Humboldt Research Prize to study ancient Greek theatre in the Black Sea, and in 2014 she was elected to the Academy of Europe. She lives in Cambridgeshire.

Colette Caillat was a French professor of Sanskrit and comparative grammar. She was also one of the world's leading Jain scholars. 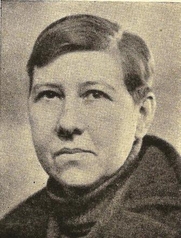 Kathleen Freeman was a British classical scholar and author of detective novels. She was a lecturer in Greek at the University College of South Wales and Monmouthshire, Cardiff between 1919 and 1946.

Nicolas Perrot d'Ablancourt was a French translator of the Greek and Latin classics into French and a member of the Académie française.

Olga Freidenberg was a Russian and Soviet classical philologist, one of the pioneers of cultural studies in Russia. She is also known as the cousin of the famous writer Boris Pasternak; their correspondence has been published and studied.

Amy Ellen Richlin is a professor in the Department of Classics at the University of California Los Angeles (UCLA). Her specialist areas include Latin literature, the history of sexuality, and feminist theory. 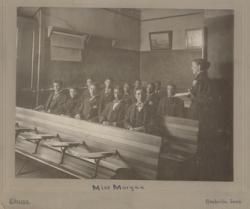 Helen Clarissa Morgan was an American educator from the U.S. state of New York. She was the first woman to be appointed professor of Latin in a US coeducational college.

Eva Henriette Sachs was a German classical philologist, whose dissertation reconceptualized the relation between Theaetetus and Plato.

Ilsetraut Hadot in Berlin, is a philosopher and historian of philosophy who specialised in Stoicism, Neoplatonism and more generally in Ancient Philosophy.

Públia Hortênsia de Castro (1548–1595) was a scholar and humanist in the court of Catherine of Austria, Queen of Portugal.

Barbara Philippa McCarthy was an American Hellenist and academic. McCarthy is mainly known for her work on Lucian of Samosata and his interactions with the Menippean satire. 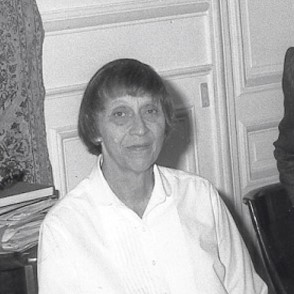 Lilly Louise Kahil was a Swiss-French archaeologist and classicist of Egyptian-German descent. She was the founder of the Lexicon Iconographicum Mythologiae Classicae, an encyclopedia of ancient Greek, Etruscan and Roman mythology.

Frazelia Campbell was an American classicist and teacher. She featured in the "Black Classicists" travelling exhibition celebrating the achievements of African Americans working in Classical education.

Jeanne Robert (1910-2002) was a French ancient historian and epigrapher, and co-author and editor of many volumes on Greek epigraphy.