Jade Louise Jones OBE (born 21 March 1993) is a Welsh taekwondo athlete. She is the 2012 and 2016 Olympic gold medallist in the women's 57 kg category, and the 2019 World champion, 2016, 2018 and 2021 European champion and 2015 European Games champion at the same weight. In 2012, she won Britain's first taekwondo Olympic gold medal in this category. [3] Jones was at the time the reigning Youth Olympic champion in the girls' 55 kg category, winning gold for Great Britain in 2010. With her skill, she was awarded the title of head hunter by the World Taekwondo Federation.

In 2010 Jones won a bronze medal at the 2010 European Taekwondo Championships in Saint Petersburg, Russia. [7] Jones competed for Great Britain at the inaugural Summer Youth Olympics in Singapore; she beat Vietnam's Thanh Thao Nguyen 9–6 in the 55 kg category final to become Great Britain's first gold medallist at the Games. [8] [9] She was named BBC Cymru Wales Junior Sportswoman of the Year 2010. [10] She is nicknamed "The Headhunter" because she prefers to try to score points from her opponent's head rather than their body as successful kicks to the head are awarded more points than successful kicks to the body. [1]

Jones won her first senior title at the US Open in Austin, Texas in February 2011. She won gold in the −62 kg division having won bronze in the −57 kg competition the previous day. [11] At the 2011 World Taekwondo Championships in Gyeongju, South Korea Jones advanced to the final of the 57 kg event after beating Marlène Harnois of France in the semi-finals. She won the silver medal after losing to China's Hou Yuzhuo in a sudden-death round. [12] In October 2011 Jones won a gold medal at the British Open in Manchester by defeating Harnois 10–8 in the final. [13] At the French Open she won a bronze medal after losing to Harnois in the semi-finals. [14]

Jones was selected to compete for Great Britain at the 2012 Summer Olympics in the women's 57 kg weight category. [18] In the games Jones beat Chinese Taipei's top seed Tseng Li-Cheng in the semi-finals after having beaten Japan's Mayu Hamada in the quarter-finals and Serbia's Dragana Gladović in her first bout. [19] In the final on 9 August 2012. she beat Hou Yuzhuo of China 6 points to 4 to become the first Briton to win a taekwondo gold medal. [20]

Jones narrowly lost 10–9 to Iranian Kimia Alizadeh at the quarter-finals stage of the 2015 World Taekwondo Championships in Russia on 17 May 2015. The result was controversial, as the electronic scoring system crashed during the bout.[ citation needed ] At the 2016 Olympic Games, Jones again won the gold medal, beating Spain's Eva Calvo, by 16–7 in the final. [21]

Jade was introduced to taekwondo by her grandfather for self-defence (aged 8).

It was confirmed that Jones would take part in E4 reality dating show Celebs Go Dating in 2018. [27]

Athletes from Great Britain, all but three of its overseas territories, and the three Crown dependencies, compete in the Olympic Games as part of Team GB. Athletes from Northern Ireland can compete with Team GB or for Ireland. It has sent athletes to every Summer and Winter Games, along with France and Switzerland, since the start of the Olympics' modern era in 1896, including the 1980 Summer Olympics, which were boycotted by a number of other Western nations. From 1896 to 2018 inclusive, Great Britain & NI has won 851 medals at the Summer Olympic Games, and another 32 at the Winter Olympic Games. It is the only national team to have won at least one Gold Medal at every Summer Games, lying third globally in the winning of total medals, surpassed only by the United States and the former Soviet Union, and fourth behind Germany when considering gold medal totals.

Great Britain, represented by the British Olympic Association (BOA), competed at the 2008 Summer Olympics in Beijing, China. The United Kingdom was represented by the British Olympic Association (BOA), and the team of selected athletes was officially known as Team GB. Britain is one of only five NOCs to have competed in every modern Summer Olympic Games since 1896. The delegation of 547 people included 311 competitors – 168 men, 143 women – and 236 officials. The team was made up of athletes from the whole United Kingdom including Northern Ireland. Additionally some British overseas territories compete separately from Britain in Olympic competition.

Aaron Arthur Cook is a taekwondo athlete who has represented Great Britain, the Isle of Man, and Moldova. He has been ranked the number one in the men's −80 kg division on several occasions. He is a three-time European champion having won the −80 kg title at the European Taekwondo Championships in 2010, 2012 representing Great Britain and 2014 representing the Isle of Man, and was the world junior champion in the −78 kg division in 2008.

Great Britain and Northern Ireland, represented by the British Olympic Association (BOA), competed at the 2012 Summer Olympics in London, United Kingdom, from 27 July to 12 August 2012 as the host nation and the team of selected athletes was officially known as Team GB. British athletes have competed at every Summer Olympic Games in the modern era, alongside Australia, France and Greece, though Great Britain is the only one to have won at least one gold medal at all of them. London is the only city to host the Summer Olympics on three different occasions, having previously done so in 1908 and 1948. Soon, it will be joined by Paris in 2024 and Los Angeles in 2028 in hosting the Olympic Games for a third time. Team GB, organised by BOA, sent a total of 541 athletes, 279 men and 262 women, to the Games, and won automatic qualification places in all 26 sports.

Hou Yuzhuo is a female Chinese Taekwondo practitioner. She won gold medal in 2009 Copenhagen World Taekwondo Championship and the silver at the 2012 Summer Olympics.

Great Britain competed at the 2012 Summer Paralympics in London, United Kingdom, from 29 August to 9 September 2012 as the host nation. A total of 288 athletes were selected to compete along with 13 other team members such as sighted guides. The country finished third in the medals table, behind China and Russia, winning 120 medals in total; 34 gold, 43 silver and 43 bronze. Multiple medallists included cyclist Sarah Storey and wheelchair athlete David Weir, who won four gold medals each, and swimmer Stephanie Millward who won a total of five medals. Storey also became the British athlete with the most overall medals, 22, and equal-most gold medals, 11, in Paralympic Games history. 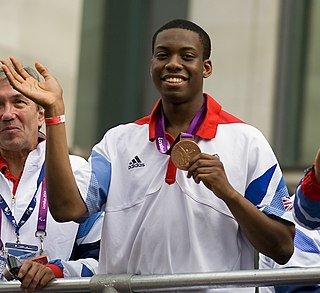 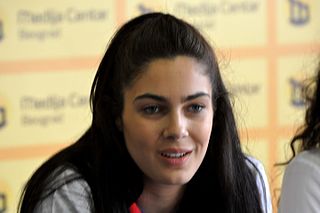 This article contains a chronological summary of major events from the 2012 Summer Olympics in London.

Hedaya Malak Wahba is an Egyptian taekwondo practitioner. She participated in the 2012, the 2016 Olympics and won a bronze medal in 2016, and the 2020 Olympics also winning Egypt's first bronze medal in the tournament.

Great Britain, or in full Great Britain and Northern Ireland, represented by the British Olympic Association (BOA), competed at the 2016 Summer Olympics in Rio de Janeiro, Brazil, from 5 to 21 August 2016 and the team of selected athletes was officially known as Team GB. British athletes have appeared in every Summer Olympic Games of the modern era, alongside Australia, France, Greece, and Switzerland, though Great Britain is the only country to have won at least one gold medal at all of them. Although the British Olympic Association is the National Olympic Committee (NOC) for Great Britain and Northern Ireland, Northern Irish athletes can choose whether to compete for Great Britain or for the Republic of Ireland, as they are entitled to citizenship of either nation under the Good Friday Agreement. In 2016 Northern Ireland born representatives in Team GB included returning rowers Alan Campbell, Peter Chambers and Richard Chambers, archer Patrick Huston and four members of the men's field hockey team: David Ames, Mark Gleghorne, Iain Lewers and Ian Sloan. The team also represents, and included representation from, the Crown dependencies, among which were Guernsey's Heather Watson and Carl Hester and the Isle of Man's Tim Kneale, and from the ten of the thirteen British Overseas Territories represented by the BOA rather than their own NOC, whose representatives include Turks and Caicos-born sprinter Delano Williams and Anguillan-born long jumper Shara Proctor

Lauren Louise Price is a Welsh amateur boxer, and former kickboxer and footballer. She competed for Wales in the women's middleweight category at the 2014 Commonwealth Games where she won a bronze medal. In doing so, she became the first Welsh woman to win a Commonwealth Games boxing medal. Four years later she surpassed this achievement by winning gold at the 2018 Commonwealth Games held in the Gold Coast, Australia. 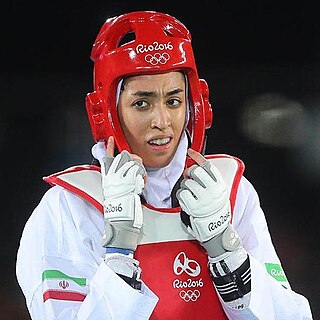 Kimia Alizadeh Zonouzi is an Iranian Taekwondo athlete. Alizadeh won a bronze medal in the taekwondo 57 kg weight class at the 2016 Summer Olympics in Rio de Janeiro by defeating Swedish athlete Nikita Glasnović. This made her the first Iranian woman to win a medal at a Summer Olympics. She also won a gold medal in the women's 63-kg class at the Nanjing 2014 Youth Olympic Games. She beat London 2012 and Rio de Janeiro 2016 gold medallist Jade Jones at the 2015 World Championship to win a bronze medal. She also won a silver medal two years later at the 2017 World Taekwondo Championships.

Raheleh Asemani is an Iranian-born taekwondo practitioner who competes internationally for Belgium. She participated at the 2016 Summer Olympics. She has a history of participating in the Asian games.

Hatice Kübra İlgün is a Turkish taekwondo practitioner. She has won a silver medal at the 2017 World Taekwondo Championships in the featherweight division.

Great Britain, or in full Great Britain and Northern Ireland, the team of the British Olympic Association (BOA), which represents the United Kingdom, is currently competing at the 2020 Summer Olympics in Tokyo. Originally scheduled to take place from 24 July to 9 August 2020, the Games were postponed to 23 July to 8 August 2021, because of the COVID-19 pandemic.

Nada Laaraj is a Moroccan taekwondo practitioner. She represented Morocco at the 2020 Summer Olympics in Tokyo, Japan.