Ortega was born on 18 October 1936 in Jagüey Grande, Matanzas, Cuba. He studied for priesthood at the Seminary of San Alberto Magno in Matanzas and in the Seminary of Foreign Missions in Laval, Quebec, Canada. He was ordained a priest on 2 August 1964 by Bishop José Domínguez Rodríguez of Matanzas. He was assigned to various parishes in the Diocese of Matanzas from 1964 to 1966. Ortega was imprisoned by the Communist government from 1966 to 1967. [1]

From 1967 to 1969, Ortega was pastor of Jagüey Grande, his native city; as all the pastors in Cuba, due to a severe shortage of priests in those years, he served in several parishes and churches at the same time. He was also pastor of the cathedral of Matanzas, and at the same time, assisted the parish of Pueblo Nuevo and two other churches in the countryside; he was also president of the diocesan commission for catechesis and created an active apostolate with the youth of the diocese. In those years, which were even more difficult for the pastoral work of the church, he began a youth movement that included, among other forms of apostolate, a summer camp for the youth, and a work of evangelization through theatrical works performed by them. [1]

At the same time, he was a professor at San Carlos y San Ambrosio Interdiocesan Seminary, Havana, where for several years he traveled every week to teach moral theology. [1]

On 4 December 1978, Pope John Paul II named him Bishop of the Diocese of Pinar del Río. He was consecrated bishop on 14 January 1979 by Mario Tagliaferri, Pro-Nuncio in Cuba, assisted by Francisco Oves-Fernandez, Archbishop of Havana, as well as José Domínguez Rodríguez, Bishop of Matanzas. [2] He chose as his episcopal motto Sufficit tibi gratia mea, [3] meaning 'My grace is sufficient for you', taken from (2 Corinthians 12:9).

On 15 June 2013, Pope Francis named Cardinal Ortega y Alamino as his special envoy to the closing ceremony of the National Eucharistic Congress in El Salvador, scheduled for 11 August 2013. [5] On 26 April 2016, Pope Francis accepted his resignation as archbishop. [6] [7]

Ortega was diagnosed with pancreatic cancer in 2018. He died on 26 July 2019. [8] Masses honoring the life of Ortega were held between 26 July and 28 July, [9] [10] and his funeral was held in the Havana Cathedral on 28 July. [11] [12] First vice-president Salvador Valdes Mesa, vice-president Roberto Morales, and Esteban Lazo, the head of the Cuban National Assembly, joined other Cuban government and Communist Party officials in attendance. [11] [12] Cuban President Miguel Diaz-Canel and former president, and also current Cuban Communist Party leader, Raul Castro, did not attend, instead opting to visit Venezuela, but sent bouquets of flowers. [12] Religious leaders from other nations, such as Miami Archbishop Thomas Wenski, Puerto Rico Archbishop Roberto Gonzalez Nieves and Cardinal Sean Patrick O’Malley of Boston, also attended Ortega's funeral. [11] Ortega was afterwards buried in the Colon Cemetery in Havana. [11]

Ortega y Alamino was critical of both capitalism and communism. Like John Paul II, he urged his nation not to construct a post-communist future on the basis of hyper-capitalist principles. In 1998, he warned of the insidious influence in Cuba of a "species of American subculture that invades everything: It is a fashion, a conception of life." [14] In September 1993 the Cuban Conference of Catholic Bishops, headed by Cardinal Ortega, published the message "El amor todo lo espera" ('Love endures all things'), extremely critical of the Cuban Communist government and asking for a new direction of the country. In April 2010 he said that Cuba was in crisis. [15]

On 20 May 2010, Dionisio García Ibáñez  [ es ], Archbishop of Santiago de Cuba, and Cardinal Ortega met with Cuban President Raúl Castro to discuss issues concerning jailed political dissidents. [16] [17] [18] Ortega said that there "will be a process and this process has to start with small steps and these steps will be made." [16] The high-level meeting followed by a press conferences was unusual. [16] [17] [18] Cardinal Ortega met with U.S. Secretary of State John Kerry on 14 August 2015, prior to Kerry's visit with the Cuban Minister of Foreign Affairs, Bruno Rodriguez; after visiting with Kerry, Ortega stated that the situation was improving. [19]

During negotiations to renew diplomatic relations between the United States and Cuba, Cardinal Ortega, without public announcement, visited the White House and hand-delivered a letter from Pope Francis to President Obama. [20] 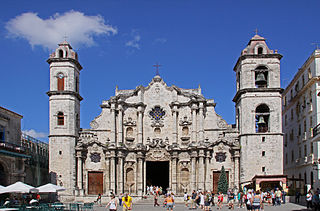 Cuba's prevailing religion is Christianity, primarily Roman Catholicism, although in some instances it is profoundly modified and influenced through syncretism. A common syncretic religion is Santería, which combined the Yoruba religion of the African slaves with Catholicism and some Native American strands; it shows similarities to Brazilian Umbanda and has been receiving a degree of official support. The Roman Catholic Church estimates that 60 percent of the population is Catholic, but only 5% of that 60% attends mass regularly, while independent sources estimate that as few 1.5% of the population does so. 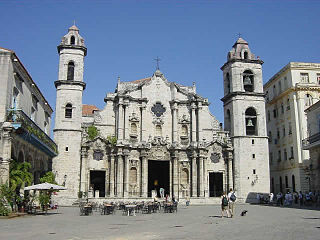 The Roman Catholic Metropolitan Archdiocese of San Cristobal de la Habana is one of three Catholic archdioceses in Cuba. 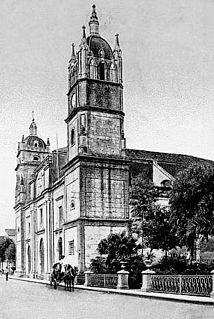 The Roman Catholic Diocese of Matanzas is a suffragan diocese of the Archdiocese of San Cristobal de la Habana.

The Roman Catholic Diocese of Pinar del Rio is a suffragan diocese of the Archdiocese of San Cristobal de la Habana.

Agustín Aleido Román Rodríguez was the Auxiliary Bishop of the Roman Catholic Archdiocese of Miami and the Titular Bishop of Sertei.

Alfredo Petit-Vergel is the Titular Bishop of Buslacena and the Auxiliary Bishop of the Archdiocese of Havana.

Juan de Dios Hernández-Ruiz, S.J. is the Titular Bishop of Passo Corese and Auxiliary Bishop of the Archdiocese of Havana. He was appointed by Pope Francis as bishop of the diocese of Pinar del Río, Cuba, on June 5, 2019.

Francisco Ricardo Oves-Fernandez was the archbishop of the Archdiocese of Havana.

Evelio Diaz-Cia was the Archbishop of the Archdiocese of Havana. 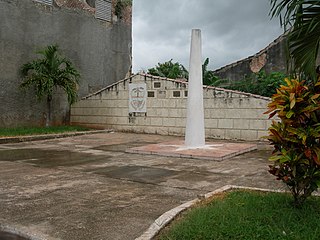 Jagüey Grande, simply known as Jagüey, is a town and municipality in the Matanzas Province of Cuba. It is located east of the Zapata Peninsula, north of the Bahia de Cochinos, along the A1 motorway in the center of the province.

Bishop Mariano Vivanco Valiente was Bishop of the Roman Catholic Diocese of Matanzas (1987–2004).

Jorge Enrique Serpa Perez is the bishop of the Roman Catholic Diocese of Pinar del Rio.

Juan de la Caridad García Rodríguez is a prelate of the Roman Catholic Church. He was appointed Archbishop of Havana on 26 April 2016. He previously served as an Auxiliary Bishop of Camagüey from 1997 to 2002 and then as Archbishop of that diocese from 2002 to 2016. He is a past president of the Cuban Conference of Catholic Bishops. 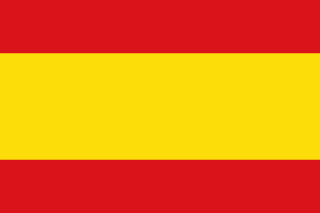 Spanish immigration to Cuba began in 1492, when the Spanish first landed on the island, and continues to the present day. The first sighting of a Spanish boat approaching the island was on 27 or 28 October 1492, probably at Bariay on the eastern point of the island. Columbus, on his first voyage to the Americas, sailed south from what is now The Bahamas to explore the northeast coast of Cuba and the northern coast of Hispaniola. Columbus came to the island believing it to be a peninsula of the Asian mainland.

The episcopate is the Cuban Conference of Catholic Bishops of Cuba.