Jakšić is a town and a municipality in Slavonia, Croatia. The population of the village was 4,437 in 2001, with 93% being Croats. It is located in the middle of a valley called Vallis Aurea known for its natural wealth. 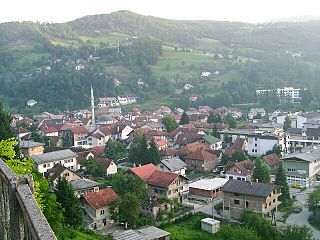 Dražen Petrović Basketball Hall is an indoor sporting arena based in Zagreb, Croatia. It serves as the home court for the professional basketball club KK Cibona. The arena has a seating capacity of 5,400 people. 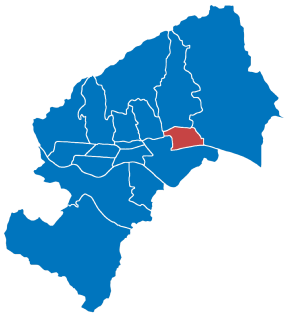 Donja Dubrava is one of the districts of Zagreb, Croatia. It is located in the northeastern part of the city and in 2011 had 36,363 inhabitants.

Trešnjevka – sjever is one of the districts of Zagreb, Croatia. It is located in the western part of the city and has 55,425 inhabitants according to the 2011 census. 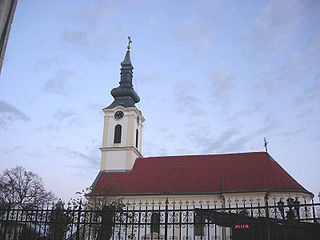 Beška is a village in Serbia. It is situated in the Autonomous Province of Vojvodina, in the region of Syrmia, in Inđija municipality. The village has a Serb ethnic majority and a population numbering 6,239 people.

Čačinci is a village and a municipality in Croatia in the Virovitica-Podravina County. It has a population of 2,802, 91% of which are Croats. It is known for being very hot in the summer and very cold in the winter.

Nova Bukovica is a village and municipality in Croatia in the Virovitica–Podravina County. It has a population of 1,771, 85% of which are Croats.

Gornji Bogićevci is a municipality in Brod-Posavina County, Croatia. There are 1,975 inhabitants of which 89% declare themselves Croats.

Vojnić is a municipality in Karlovac County, Croatia. There are 4,764 inhabitants, 45% of whom are Serbs and 37% of whom are Croats. The municipality is part of Kordun. Vojnić is underdeveloped municipality which is statistically classified as the First Category Area of Special State Concern by the Government of Croatia.

Karanac is a settlement in the region of Baranja, Croatia. Administratively, it is located in the Kneževi Vinogradi municipality within the Osijek-Baranja County. Population is 1,065 people.

Majške Međe is a settlement in the region of Baranja, Croatia. Administratively, it is located in the Jagodnjak municipality within the Osijek-Baranja County. Population is 82 people.

Ilica street is one of the longest streets in Zagreb, Croatia. The busy street is home to many shops and cultural sites and spans through most of the northwestern part of the city, from the Ban Jelačić Square in the city centre westward to the Vrapče district. The street is 5.66 km long, making it the third longest street in the city.

Pačetin is a village in the municipality of Trpinja, Vukovar-Srijem County in the easternmost part of Croatia. At the time of the 2011 Census the population of the village was 541. Village lies north of the Vuka River and west of the M601 railway. Its major landmark is the Church of St. Nicholas from the 18th century. County road Ž4111 passing through the villages of Pačetin, Bobota and Vera connect all three villages with D2 road and D55 road. Pačetin is 28.6 km southeast of Osijek, the economic and cultural centre of Slavonia and 17.2 km from the Osijek Airport. County seat Vukovar is 17.3 km east of Pačetin.

Museum of Slavonia is the largest general-type museum in Croatia.