Mir Jam Mohammad Yousaf was born in 1954 at Lasbela, Balochistan. He belonged to the Koreja Family of Samma Tribe who ruled over Sindh. One of his ancestor Jam Arradin Migrated from Sindh and settled in Kanrach during the riegn of Mughal emperor Jahangir(1569-1627) later one of his descendents of Jam Arradin,Jam Rabdino was known for his bravery and generosity. At that time Lasbela was under the rule of Burfats Finally Jam comes over and They ruled over Lasbela for our two centuries and produced nine able rulers namely Jam Aali Korejo(1742-1760) Jam Ghulam Shah Korejo(1760-1776) Jam Mir Khan Korejo(1776-1830) Jam Aali Khan II,Jam Mir Khan II,Jam Mir Khan III,Jam Kamal khan,Jam Ghulam Muhammad Khan and Jam Ghulam Qadir Khan

Yousaf served as the Chief Minister of Balochistan province from 2002 to 2007. He also had been the Minister for Water and Power, Railways and a Minister in Balochistan assembly. Previously he has held positions as MNA and MPA in the National and Balochistan Provincial Assembly. He was the Provincial President of PML (Q) from 2002.

Las Bela was a princely state in a subsidiary alliance with British India which existed until 1955. The state occupied an area of 18,254 km2 (7,048 sq mi) in the extreme southeast of the Balochistan region, with an extensive coastline on the Arabian Sea to the south. Las Bela was bordered by the princely states of Kalat and Makran to the north and west. To the east lay the province of Sind and to the southeast lay the Federal Capital Territory around the city of Karachi.

Mir Ghaus Bakhsh Bizenjo was a prominent Baloch politician of Balochistan, Pakistan. He was born in Nall Khuzdar Balochistan in either December 1917 His father's name was Safar Khan. One of the founding members of the National Awami Party, he served as the Governor of Balochistan from 1972 to 1973 and was a key signatory to Pakistans Third constitution.

National Party is a social democratic, centre-left political party. It is one of the largest parties active in the province of Balochistan, Pakistan along with Balochistan National Party. It traces its legacy from the Kalat State National Party of Mir Ghaus Bakhsh Bizenjo, Mir Gul Khan Nasir and Mir Abdul Aziz Kurd, and is currently headed by Abdul Malik Baloch.

Nawab Mir Yousaf Aziz Magsi was a prominent Baloch leader from the present-day Balochistan province of Pakistan. He hailed from the Magsi tribe headquartered in Jhal Magsi, the ancestral home of the Magsi. His title was Nawab, which means "ruling prince" or "tribal chief". His father, Kaiser Khan Magsi, was the Nawab of the Magsi tribe.

Nawab Zulfiqar Ali Magsi, was the 20th Governor of Balochistan Province since 28 February 2008 to 9 June 2013 as well as the chief executive of Balochistan since 14 January 2013. He is the Nawab and Tumandar of Magsi Tribe, Governor and the Chief Executive of Balochistan, a senior politician and the former Chief Minister of Balochistan province in the Benazir Bhutto government of 1993–1996. Nawab was appointed as the Chief Executive of Balochistan on 13 January 2013 after the sacking of Aslam Raisani's unpopular government and imposing of Governors Rule. It was the main after effect of the January 2013 Pakistan bombings. Nawab Magsi did his schooling from Aitchison College, Lahore. He first came to politics in 1977, when he won as an independent candidate seat from his native constituency in provincial assembly. However, his family was involved in Balochistan politics before Pakistani independence. He served in many provincial ministries and also worked in the Home Ministry in the 1990s. In 1993, his coalition won majority of seats and he became Chief Minister of Balochistan.

Jam Mir Ghulam Qadir Khan Aliani, who belonged to Koreja Family of Samma Tribe who ruled over Sindh.One of his ancestor Jam Arradin Migrated from Sindh and settled in Kanrach during the riegn of Mughal emperor Jahangir(1569-1627) later one of his descendents of Jam Arradin,Jam Rabdino was known for his bravery and generosity. At that time Lasbela was under the rule of Burfats Finally Jam comes over and They ruled over Lasbela for our two centuries and produced nine able rulers namely Jam Aali Korejo(1742-1760) Jam Ghulam Shah Korejo(1760-1776) Jam Mir Khan Korejo(1776-1830) Jam Aali Khan II,Jam Mir Khan II,Jam Mir Khan III,Jam Kamal khan,Jam Ghulam Muhammad Khan CIE, OBE was the last Jam of Lasbela, the title of the rulers of the princely state of Las Bela in Balochistan, Pakistan.

Sardarzahi or Sardarzāi ( Balochi: سددازهی) refers to sardars, rulers or Hakomzāts in south eastern province of Baluchistan of Iran. Sardarzahis were originally from Jadgal ancestry. The Jadgal claim to have immigrated from Sind some ten generations ago to the most extreme southeastern corner of Iranian Baluchistan which is currently a part of Dashtiari and bahu districts in Chabahar County. 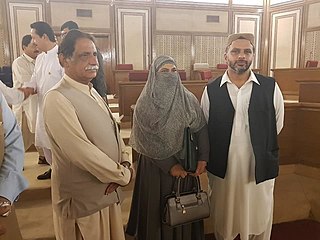 Mir Jan Mohammad Khan Jamali Born in Usta Muhammad, He served as the Speaker of the Balochistan Assembly from 4 June 2013 to 2015. Mir Jan Muhammad Jamali served as 9th Chief Minister of Balochistan from 13th of Aug 1998 till 12Oct 1999 When Army Chief General Pervaiz Mushraf over took the Government. He served two terms as Deputy Chairman of the Senate of Pakistan from March 2006 to March 2012. Jan Mohammad Jamali contested in 2013 elections from PB25( now PB14 ) and won on seat of PML N, He again contested from PB14 and won on seat of BAP. He is well known personality through out Balochistan.

Jam Ali Akber (Urdu) شهزاده جام علي اكبر خان belongs to the Lasbela royal house and is the former Provincial Minister of Balochistan Province. He has been a member of the Provincial Assembly of Balochistan twice.

Mir Hazar Khan Khoso, was the caretaker Prime Minister of Pakistan from 25 March 2013 to 5 June 2013. A jurist, Khoso is a retired judge who previously served as the Chief Justice of the Federal Shariat Court and served as the interim prime minister ahead of the general elections scheduled in May 2013.

NA-270 (Awaran-cum-Lasbela) was a constituency for the National Assembly of Pakistan.

Nawab Sanaullah Khan Zehri was the Chief Minister of Balochistan from 24 December 2015 to 9 December 2017. He belongs to Channal Zarakzai family and also the Nawab of the Zehri tribe and chief of Jhalawan & Zehri is a Sub Caste of Baloch. Zehri succeeded Abdul Malik Baloch as chief minister Balochistan, Pakistan on 24 December 2015 as part of the power sharing deal brokered in the resort town of Murree. Zehri is the central president of the Pakistan Muslim League's Balochistan branch and a confidant of Prime Minister Nawaz Sharif.

Jam of Lasbela was the princely title of Las Bela State in Balochistan of Pakistan.

Bara Bagh Cemetery, Lasbela is an ancient cemetery of the Jams of Lasbela of the Lasbela princely state, containing more than 100 graves of which 40 belong to the Jams.

Jam Mir Kamal Khan Alyani is a Pakistani politician who belonged to Korejo Family of Samma Tribe which ruled on Sindh from 1324 to 1524 CE. is the current and 16th Chief Minister of Balochistan, in office since 19 August 2018. He has been a member of the Provincial Assembly of Balochistan since August 2018.

Jam is a native title of rulers of a few princely states, notably born in western British India by the Samaa dynasty and their Jadeja branch.