Born in Golconda, Pope County, Illinois, Rose went to Illinois Normal State University in Normal, Illinois. He taught school in Pope County, was elected county superintendent of schools in 1873, and state's attorney in 1881. Rose was a Republican. Rose served as Illinois Secretary of State from 1897 until his death in 1912. Rose died in Springfield, Illinois as a result of a stomach hemorrhage. [1] [2]

Pope County is the southeasternmost county in the U.S. state of Illinois. According to the 2010 census, it had a population of 4,470, making it the second-least populous county in Illinois. Its county seat is Golconda. The county was organized in 1816 from portions of Gallatin and Johnson counties and named after Nathaniel Pope, a politician and jurist from the Illinois Territory and State of Illinois.

Taylorville is a city in and the county seat of Christian County, Illinois, United States. The population was 10,506 at the 2020 census, making it the county's largest city.

Golconda is a city in and the county seat of Pope County, Illinois, United States, located along the Ohio River. The population was 630 at the 2020 census. Most of the city is part of the Golconda Historic District.

Daniel Pope Cook was a politician, lawyer and newspaper publisher from the U.S. state of Illinois. An anti-slavery advocate, he was the state's first attorney general, and then congressman. Cook County, Illinois, is named after him.

Ben Wilson Olcott was an American politician of the Republican Party who served as the 16th Governor of Oregon.

Robert Potter Hill was an American politician and a U.S. Representative from Illinois and from Oklahoma.

Ida Crouch-Hazlett was an American political activist prominent in the suffrage and socialist movements. Crouch-Hazlett is best remembered as a prominent orator and organizer for the Socialist Party of America during the first two decades of the 20th century. In 1902 Crouch-Hazlett became the first female candidate for U.S. Congress from Colorado, when she ran for a seat in the House of Representatives.

Alfred Miles Jones, nicknamed "Long" Jones, was an American politician and businessman. Born in New Hampshire, Jones came with his family to Illinois in 1847. Jones became a prominent politician in Jo Daviess County, Illinois, eventually rising to deputy sheriff and the leader of the county chapter of the Republican Party. He was elected to two terms in the Illinois House of Representatives, then received two positions under the spoils system. Jones was chairman of the Illinois Republican Committee for twelve years. In the 1880s, he assumed control of the Bethesda spring in Waukesha, Wisconsin, and helped turn it into one of the most prominent spring water companies in the nation. He moved to Waukesha in 1896 and was elected to the Wisconsin State Senate three years later, serving one term.

Henry Eduard Legler was an Italian American journalist, politician, and librarian. Born in Palermo, Sicily, Italy, His birth name was given as Enrico, Legler emigrated with his parents to the United States in 1869 and then settled in Milwaukee, Wisconsin in 1872. While in Wisconsin, Legler was a journalist. In 1889, Legler served in the Wisconsin State Assembly and was a Republican. From 1890 to 1894, Legler served as secretary of the Milwaukee School Board.

Cornelius James Doyle was an American lawyer and politician.

Cora Louise Boehringer was the first female superintendent of schools in Yuma County, Arizona. She has been called "the mother of the Arizona educational system". In 2008 she was inducted into the Arizona Women's Hall of Fame.

James Henry Forrester was an American lawyer, judge, and politician.

James Shaw was an American judge. lawyer, politician, and geologist. 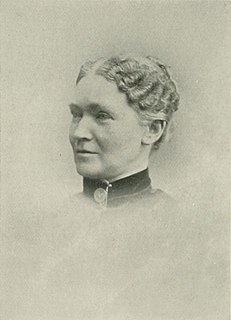 Emily Caroline Chandler Hodgin was an American temperance reformer. She was one of the leaders in the temperance crusade of Terre Haute, Indiana, in 1872, and was a delegate to the convention in Cleveland, Ohio, where the crusading movement developed into the organization of the Woman's Christian Temperance Union (WCTU). After that, she began the work of organizing forces in neighboring parts of Indiana. She became president of the WCTU in her own county and secretary of the State temperance association. She greatly aided the cause from the lecture platform, for though a member of the Society of Friends, she availed herself of the freedom accorded to the speaker in meetings.