Harold Edward James Aldridge (10 July 1918 – 23 February 2015) [1] was an Australian-British writer and journalist. [2] His World War II despatches were published worldwide and he was the author of over 30 books, both fiction and non-fiction works, including war and adventure novels and books for children.

Aldridge was born in White Hills, a suburb of Bendigo, Victoria. By the mid-1920s the Aldridge family had moved to Swan Hill, and many of his Australian stories are based on his life growing up there. He studied at the London School of Economics. He returned to Australia and worked for The Sun News-Pictorial in Melbourne from 1935 to 1938. [3] In 1938 Aldridge moved to London, which remained his base until his death in 2015.

During the Second World War, Aldridge served in the Middle-East as a war correspondent, [4] reporting on the Axis invasions of Greece and Crete. Based on his experiences, he wrote his first novel Signed with Their Honour and the book was published in both Britain and the United States in 1942, becoming an immediate best-seller. [5] The novel centred on a fictional young British Royal Air Force pilot named John Quayle who flies obsolete Gladiator biplanes for the true-life 80 Squadron against the larger and more powerful Axis air-forces over Greece, Crete and North Africa 1940–41. [6] The novel received considerable praise from reviewers including the Miami News which said "...so graphic are the descriptive passages that the reader tastes the dust and feels the insect stings in the Egyptian heat". [7] American critic Herbert Faulkner West stated that the book "showed real promise" and ranked it the best of his wartime novels. [8] The book proved to be one of Aldridge's most successful, remaining in print until 1988. [9] An attempt in 1943 to make a film based on the novel was abandoned when two Gloster Gladiator biplanes were destroyed in a mid-air collision during filming at an RAF base at Shropshire in the UK. [10]

His second novel The Sea Eagle (1944), which centred on Australian soldiers during and after the fall of Crete in 1941, was also successful but received less favourable reviews than his first book. [11] [12] American critic N. L. Rothman, however, writing in the Saturday Review, praised the novel for its "timeless-ness" and the high quality of its prose. [13] Aldridge's early novels were heavily influenced by the literary mannerisms of US author Ernest Hemingway. [14] For The Sea Eagle, Aldridge won the John Llewellyn Rhys Prize. [15]

Aldridge's most successful and most widely published novel The Diplomat was released in 1949. [16] An espionage and political drama set amidst the Azerbaijan Revolution in Iran, the novel received mixed reviews. The Anglo-Soviet Journal called it absorbing and impressive. [17] An American review for Kirkus, however, while acknowledging the book's premise to be promising and original, labelled it as slow, repetitive and awkward in style. [18]

His 1950 novel The Hunter proved that Aldridge was willing to attempt a variety of genres and settings. A drama about fur-hunters living in the wilds of the Ontario bushlands in Canada, the novel was, according to Walter O'Meara in the Saturday Review, written in a "flat direct prose that just when you decide to be bored straightens you up with an incisive and revealing word or phrase." He went on to say it was "a sincere and occasionally penetrating study of man against the eternal odds". [19]

Aldridge's next book appeared in 1954, a novel entitled Heroes of the Empty View, depicting an English hero-adventurer in the Middle-East in the vein of T. E. Lawrence and Charles Gordon. Mervyn Jones writing in Tribune magazine criticised the novel's shortage of action, the un-convincing lead character and the book's lack of passion. Jones said that Aldridge had "impressive gifts" as a novelist but needed to find a subject that "really fires him". [20] The novel got a better response from Walter Havighurst, writing in the Saturday Review , who called it "a provocative novel...written with authoritative knowledge of men, machines and politics". [21] A review for Kirkus Reviews praised the novel as being "perhaps his most important work, and implicit in its picture of the conflicts, the contradictions, the dilemmas of the Arabs....There is a wider view of the battle for freedom in a world where a machine-ruled society is becoming the norm". [22]

Aldridge returned to the Second World War with his next novel, I Wish He Would Not Die (1957), a drama set in the Desert Air Force in Egypt. Kirkus Reviews labelled it as an effective work, dealing with "men living under stress and with a heightened sense of humanity present the issues that haunt them..." [23] Aldridge's direct experiences of Egypt, where he lived for much of the Post-War era, both as a Foreign Correspondent and later as a novelist, inspired the 1961 novel The Last Exile, set amidst the turbulence of the Suez Crisis in 1957. The novel, one of Aldridge's most lengthy and most ambitious, drew a less favourable response than previous works. Hal Lehrman, writing in the Saturday Review, labelled it "a swollen bore". [24]

Aldridge continued to draw inspiration from topical events and the Cold War tensions between the East and West gave him the subject for his next novel A Captive in the Land (1962), set in the frozen wastes of the Arctic where an English scientist rescues the sole survivor of a crashed Russian aircraft. Like all of his politically themed works, Aldridge attempted to explore all viewpoints and portray the "grey" area in-between opposing forces and beliefs. In this case, the Englishman is initially viewed by his fellow Westerners as a hero but later he is treated with increasing suspicision due to his efforts to allow the Russian to be freed. W. G. Rogers, writing in the Saturday Review, praised the novel thus: "...the moral adventure here is more challenging and better and faster reading than the physical. But all the way its a gripping story that gets under your skin and stays there." [25] The novel was made into a film of the same name in 1993.

From the mid-1960s, many of Aldridge's works were written for children and young adults and a number of his later works were set in his homeland of Australia. His 1966 novel My Brother Tom was set in the fictional Australian town of St Helen, closely based on the town of Swan Hill by the Murray River where he spent much of his childhood. This novel, the first in a series of six set in St Helen, while a novel that portrayed a love story between two young people, explored moral and political dilemmas and ideas, in this case the severe tensions between the town's Catholic and Protestant citizenry. [26] The novel became a TV mini-series in 1986, starring Gordon Jackson and Keith Michell. Another of the St Helen series, The True Story of Lilli Stubeck, was the 1995 Children's Book Council of Australia book of the year. His 1973 children's novel A Sporting Proposition was adapted as the 1975 Disney film Ride a Wild Pony . [27]

In 1971 he was a member of the jury at the 7th Moscow International Film Festival. [28] Aldridge won a Lenin Peace Prize in 1972 for "his outstanding struggle for the preservation of peace". That year he also won the gold medal for Journalism from the Organisation for International Journalists. He has also won the World Peace Council Gold Medal. For The True Story of Spit Macphee (Viking, 1986) he won the annual Guardian Children's Fiction Prize, a once-in-a-lifetime book award judged by a panel of British children's writers. [29]

The Time in Between is a novel by Canadian author David Bergen. It deals with a man, who mysteriously returns to Vietnam, where he had been a soldier earlier in his life, followed by his children, who also go to Vietnam to search for him. The novel was the recipient of the Scotiabank Giller Prize and the McNally Robinson Book of the Year Award in 2005.

James Kirkwood Jr. was an American playwright, author and actor. In 1976 he received the Tony Award, the Drama Desk Award for Outstanding Book of a Musical, and the Pulitzer Prize for Drama for the Broadway hit A Chorus Line.

Sir Antony James Beevor, is a British military historian. He has published several popular histories on the Second World War and the 20th century in general. 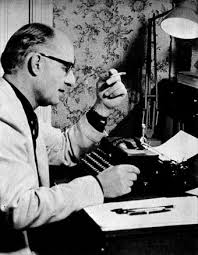 Henry Treece was a British poet and writer who also worked as a teacher and editor. He wrote a range of works but is mostly remembered as a writer of children's historical novels. 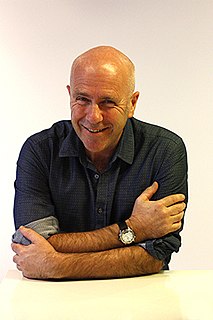 Richard Miller Flanagan is an Australian writer, "considered by many to be the finest Australian novelist of his generation", according to The Economist. Each of his novels has attracted major praise and received numerous awards and honours. He also has written and directed feature films. He won the 2014 Man Booker Prize for The Narrow Road to the Deep North.

Philip William Turner was an English writer best known for his children's books set in the fictional town of Darnley Mills (1964–1977). Under the pen name Stephen Chance he is known for the Reverend Septimus Treloar mystery fiction series (1971–1979).

Neal Shusterman is an American writer of young-adult fiction. He won the National Book Award for Young People's Literature for his book Challenger Deep.

Raj Kamal Jha is an Indian newspaper editor and novelist. He currently serves as the editor-in-chief of The Indian Express. He has also written five novels.

Lynne Reid Banks is a British author of books for children and adults.

John Roberts Tunis, "the 'inventor' of the modern sports story", was an American writer and broadcaster. Known for his juvenile sports novels, Tunis also wrote short stories and non-fiction, including a weekly sports column for the New Yorker magazine. As a commentator Tunis was part of the first trans-Atlantic sports cast and the first broadcast of the Wimbledon Tennis Tournament to the United States.

Irwin Allan Sealy is an Indian writer. His novel The Everest Hotel: A Calendar was shortlisted for the 1998 Booker prize.

The Four-Story Mistake is a children's novel written and illustrated by Elizabeth Enright, published by Farrar & Rinehart in 1942. It is the second book in the Melendy family series which Enright inaugurated in 1941. The family leaves World War II-era New York City for a house in the country, a house that is an adventure in itself.

Peter Alan Stanley is an Australian historian and research professor at the University of New South Wales in the Australian Centre for the Study of Armed Conflict and Society. He was Head of the Centre for Historical Research at the National Museum of Australia from 2007–13. Between 1980 and 2007 he was an historian and sometime exhibition curator at the Australian War Memorial, including as head of the Historical Research Section and Principal Historian from 1987. He has written eight books about Australia and the Great War since 2005, and was a joint winner of the Prime Minister's Prize for Australian History in 2011.

Jungle Lovers (1971) is the fifth novel by American author Paul Theroux and set in post-colonial Malawi. It was published by Houghton Mifflin (US) and The Bodley Head (UK). The author worked in Malawi from 1963 to 1965 with the United States Peace Corps, before being deported for public criticism of dictator Hastings Banda. Because the Banda regime did not like the novel, it was banned in Malawi for many years. 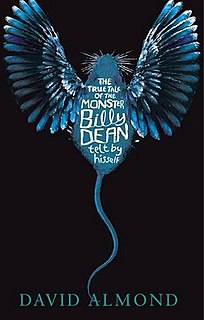 The True Tale of the Monster Billy Dean telt by hisself is a 2011 story by David Almond. It was released simultaneously in young adult (Puffin) and adult editions (Penguin), and was Almond's first adult novel. It is about a boy, Paul, who is imprisoned by his parents until the age of thirteen and on his freedom is treated as a messiah.