James Broad (January 27, 1958 – November 20, 2001) was an American heavyweight boxer who was an amateur star and, prior to the boycott, set to represent America in the 1980 Moscow Olympics. As a pro he won the NABF heavyweight title and was a regular sparring partner of a peak Mike Tyson. He fought the likes of James Smith, Razor Ruddock, Tony Tucker, Tim Witherspoon, Johnny du Plooy, Francesco Damiani, and Greg Page.

James Broad took up boxing while serving in the U.S. Army, being a Specialist 4th class stationed at Fort Ord.

Broad took up boxing when he joined the army in 1976. He beat Chris McDonald on points, and scored a first-round-knockout victory over Marvis Frazier in the 1980 Olympic Trials finals, [1] where he qualified for the 1980 U.S. Olympic Boxing team which ultimately did not compete due to President Jimmy Carter's order to boycott the Olympics. He also lost a decision to Tony Tubbs.

Nicknamed "Broad-Axe", Broad turned pro in 1981 and put together 12 wins, including a 4th-round knockout of future Heavyweight Champ James "Bonecrusher" Smith. His weight was already a problem at this early stage of his career, but Broad worked down to 228 for his first big fight, against fellow undefeated prospect Marvis Frazier. Broad rocked Frazier with his signature uppercuts but was unable to replicate his knockout victory in the amateurs, and he was outworked over 10 rounds.

Broad bounced back to outpoint Larry Alexander over 12 rounds in 1983 then knockout contender Eddie Gregg in 8 rounds to win the NABF title in 1984. For his first title defense Broad scaled a whopping 261 lbs and was knocked out in 2 rounds by once and future world champion Tim Witherspoon in 1985.

Broad was unable to get back into serious shape for the remainder of his career, and his results suffered. He lost a 12-round decision to top contender and future world champion Tony Tucker for the USBA title in 1986, and in 1987 was twice outpointed over 10 rounds, by Francesco Damiani in Italy and then by ex-world champ Greg Page, in a fight where both men were down.

Broad outpointed future cruiserweight world title-challenger Patrick Lumumba but went to South Africa and was poleaxed in 4 rounds by Johnny DuPlooy. In his next fight he was stopped on his feet, in questionable circumstances, by rising contender Donovan "Razor" Ruddock. During all this time Broad was a sparring partner for a peak Mike Tyson and took many punches in the gym.

In 1992 Boxing Illustrated reported that Broad intended to make a comeback and wanted to be world champion, despite the fact he was banned in Nevada and California both for failing a neurological exam and testing positive for Hepatitis. He somehow managed to get 4 more fights, losing 3 of them. By 2000 Broad was said to be homeless in Las Vegas and badly brain damaged, James died in 2001 aged only 43. 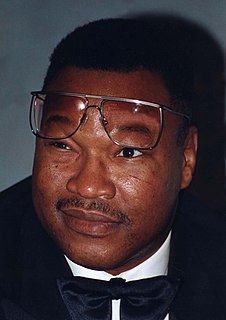 Larry Holmes is an American former professional boxer who competed from 1973 to 2002. He grew up in Easton, Pennsylvania, which led to his boxing nickname of the Easton Assassin. 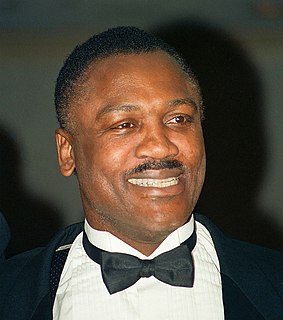 Joseph William Frazier, nicknamed "Smokin' Joe," was an American professional boxer who competed from 1965 to 1981. Frazier was known for his strength, durability, formidable punching power, and relentless pressure fighting style and was the first boxer to beat Muhammad Ali. He reigned as the undisputed heavyweight champion from 1970 to 1973 and as an amateur won a gold medal at the 1964 Summer Olympics.

Buster Mathis was an American boxer.

Tony Craig Tucker is an American former professional boxer who competed from 1980 to 1998. He won the IBF heavyweight title in 1987, and was the shortest-reigning world heavyweight champion at just 64 days. In an interview with Barry Tompkins, he referred to himself as the "invisible champion," due to the press and general public largely neglecting him. He is best known for giving Mike Tyson in his prime a relatively close fight, in which he, in words of Larry Merchant, "rocked Tyson in the first round," but Mike managed to withstand pressure and won a unanimous decision. As an amateur, he won the 1979 United States national championships, the 1979 World Cup, and a gold medal at the 1979 Pan American Games, all in the light heavyweight division.

Michael Dwayne Weaver is an American former professional boxer who competed from 1972 to 2000, and held the WBA heavyweight title from 1980 to 1982. 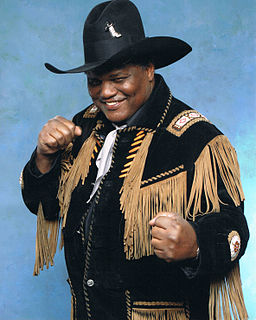 Jesse Ferguson is a retired American boxer who fought in several noteworthy boxing matches in the 1980s and 1990s. His professional career is filled with matches with champions and contenders and his name is linked with numerous boxing stars of the 1980s and 1990s. 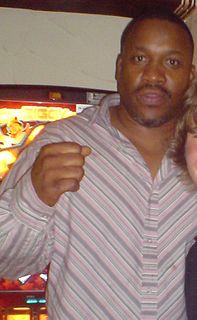 Tim Witherspoon is an American former professional boxer who competed from 1979 to 2003. He was a two-time world heavyweight champion, having held the WBC title in 1984, and the WBA title in 1986. Witherspoon also worked as a regular sparring partner for Muhammad Ali.

James "Bonecrusher" Smith is an American former professional boxer who competed from 1981 to 1999, and held the WBA heavyweight title from 1986 to 1987.

Greg Page was an American professional boxer who competed from 1979 to 2001, and held the WBA heavyweight title from 1984 to 1985. He was also a regular sparring partner for Mike Tyson, famously knocking down the then-undefeated world champion during a 1990 session.

Tony Tubbs is an American former professional boxer who competed from 1980 to 2006, and held the WBA heavyweight title from 1985 to 1986.

Gregorio Manuel Peralta, better known as Gregorio "Goyo" Peralta, was a top Argentine boxer. Peralta enjoyed success as both a light heavyweight and a heavyweight, one of a select group Latin American Heavyweights to attain world-class status. Greg Peralta was a popular performer during the 1950s, 1960s and 1970s.

Donovan "Razor" Ruddock is a Jamaican-Canadian former professional boxer who competed from 1982 to 2001, and in 2015. He is known for his two fights against Mike Tyson in 1991, and a fight against Lennox Lewis in 1992. Ruddock was also known for his exceptional punching power: one of the best examples of his left hand power was his knockout of former WBA heavyweight champion Michael Dokes in 1990. His favoured weapon at the ring proved to be a highly versatile half-hook, half-uppercut left-handed punch he called "The Smash," which accounted for the majority of his knockout wins, and also happened to be his major downside during his entire career, as he didn't throw a single right hand during most of knockout flurries, being a left-handed puncher fighting out of the orthodox stance. 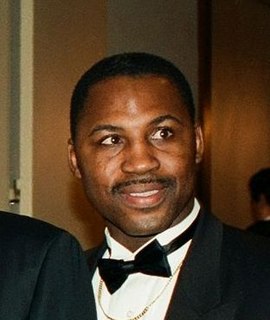 Marvis Frazier is an American former professional boxer who fought in the heavyweight division.

Mitch Green is an American former professional boxer who competed from 1980 to 2005. He is best known for going the distance with Mike Tyson, who was undefeated in 1986, and for his later street brawl with Tyson in 1988. A toothpick dangling between his lips became his trademark at any public appearance.

David Lee Jaco is a retired heavyweight boxer. He spent his career as a journeyman, fighting boxers to build up their career records. He retired in 1994 with 24 wins, 25 losses, and 1 draw. Although he lost bouts to Mike Tyson, George Foreman, Tommy Morrison, Carl Williams, Tony Tucker, Buster Douglas, Mike Weaver and Oliver McCall, he won bouts against the undefeated Donovan Ruddock, Rick "King Kong" Keller, and many more.

José Manuel Ribalta is a Cuban former professional boxer who competed in the heavyweight division from 1982 to 1999. He is best known for his fight against Mike Tyson in 1986.