Sir James Douglas, 2nd Earl of Douglas and Mar (c. 1358 – 14 August 1388) was an influential and powerful magnate in the Kingdom of Scotland.

He was the eldest son and heir of William Douglas, 1st Earl of Douglas and Margaret, Countess of Mar. By the time his father had made over lands in Liddesdale to him in 1380, he had been knighted, being known as Sir James Douglas of Liddesdale. [2] Earlier his father had been in dispute with King Robert over the latter's succession to King David II, but returned to royal favour by concluding a marriage contract between his son and the Princess Isabel, thus binding the Douglas family close to the throne. [3]

Earl of Douglas and Mar

In May 1384, the 1st Earl of Douglas died from a fever, and his son inherited. [4] Around the same time a French embassy arrived in Scotland to negotiate a truce between the Franco-Scots Allies and England. While deliberations were taking place in Edinburgh, a further party of French knights arrived at Montrose. These adventurers led by Geoffroi de Charny, sent word to the court at Edinburgh, from Perth where they had marched to, in which they offered their services against the English [5] The new Earl of Douglas, and Sir David Lindsay mustered their men and joined forces with the French knights. They then led a raid into England where they ravaged lands belonging to the Percy Earl of Northumberland, and the Mowbray Earl of Nottingham. [6] While this Chevauchée was happening, the Scots agreed to the tripartite truce on 7 July which was to last until May the following year. De Charny and his knights returned to France but promised to Douglas that they would return as soon as possible.

In 1385 when the truce expired, Douglas made war on the English. [7] The French were as good as their word and had previously arrived at Leith with a contingent of Chivalry, armour and monies. The French under Jean de Vienne, Admiral of France joined forces with the Scots. Finding that the army of Richard II of England was numerically superior to the Franco-Scots, Douglas allowed the English to advance to Edinburgh, wisely refusing battle, the English army destroyed the Abbies of Melrose, Newbattle and Dryburgh, as well as burning the burgh of Haddington and the capital itself. Douglas contented himself with a destructive counter-raid on Carlisle and Durham, leading the French, and the men of Galloway, under his cousin Archibald the Grim. Disputes soon arose between the allies, and the French returned home at the end of the year.

1386 saw squabbling between the Earl of Northumberland, and John Neville, 3rd Baron Neville de Raby over the wardenship of the Eastern March. Roger de Clifford, 5th Baron de Clifford, the warden of the Western March, was engaged to keep the peace between the rivals. While Clifford was away from his duties in the west, Douglas accompanied by the Earl of Fife led a force deep into Cumberland, and raided and burnt the town of Cockermouth. [8]

In 1388 Richard II had domestic troubles with his recalcitrant barons and was occupied far to the south, and the time seemed right for invasion to avenge the destruction of 1385.

The Scots, following an agreement made between the nobility at Aberdeen, mustered at Jedburgh in August, including the levies of the earls of Fife, March, Moray and those of Archibald the Grim. Upon finding from an English spy, that the English warden Percy was aware of the muster, and was planning a counter strike, the Scots command decided to split the army, with Fife leading the main body into Cumberland, while a smaller mounted force under Douglas was to go east and despoil Northumberland.

Douglas' force entered England through Redesdale and proceeded south to Brancepeth laying waste to the countryside. From there the turned east to encircle Newcastle.

Newcastle was held by Northumberland's sons, Sir Henry Percy, known as "Hotspur", and his brother Sir Ralph Percy. Northumberland himself remained at Alnwick Castle, hoping to outflank Douglas should he attempt to return to Scotland.

The Scots, without the siege equipment to invest the Castle, encamped around it. The week that followed saw constant skirmishes and challenges to single combat between the two sides, that culminated when Douglas challenged Hotspur to a duel. In the ensuing joust Douglas successfully felled Hotspur and was able to capture his pennon. According to Froissart, Douglas announced that he would "carry [the pennon] to Scotland and hoist it on my tower, where it may be seen from afar", to which Hotspur retorted "By God! You will never leave Northumberland alive with that."

The following day the Scots struck camp and marched to Ponteland where they destroyed its castle, and then on to Otterburn just 30 miles from Newcastle, Douglas appeared to be tarrying to see whether Hotspur would react.

Douglas chose his encampment in a wood with an eye to protect his force from English archery. But on the evening of the 5 August, the Percies surprised the Scots and a bloody moonlit battle ensued. Douglas was mortally wounded during the fight, but because of the confusion of fighting in darkness this fact was not transmitted to his men who carried on the battle. Froissart gives account in detail of the various individuals wounded, captured or killed, but what is known is that the Scots won the encounter taking Hotspur and many others prisoner. Douglas' body was found on the field the following day. The Scots, albeit saddened by the loss of their leader, were heartened enough by the victory, to frighten off English reinforcements led by Walter Skirlaw, the Bishop of Durham the following day.

Douglas' body was then removed back across the Border and he was interred at Melrose Abbey.

The battle, as narrated by Jean Froissart, forms the basis of the English and Scottish ballads The Ballad of Chevy Chase and The Battle of Otterburn .

Douglas married Isabel, a daughter of King Robert II of Scotland. He left no legitimate male issue. His natural sons William and Archibald became the ancestors of the families of Douglas of Drumlanrig (see Marquess of Queensberry) and Douglas of Cavers. His sister Isabel inherited the lands and earldom of Mar, and the unentailed estates of Douglas. Isabel arranged for the Bonjedward estate to be passed to their half-sister, Margaret, who became 1st Laird of Bonjedward.

The earldom and entailed estates of Douglas reverted by the patent of 1358 to Archibald Douglas, called "The Grim", cousin of the 1st Earl and a natural son of The "Good" Sir James Douglas. 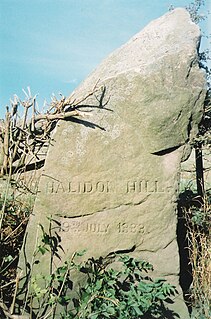 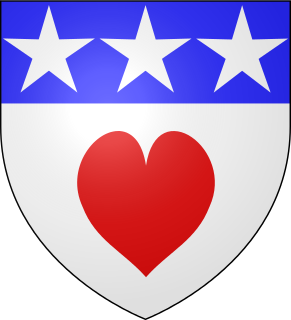 The Battle of Otterburn took place according to Scottish sources on 5 August 1388, or 19 August according to English sources, as part of the continuing border skirmishes between the Scots and English.

The Battle of Holmedon Hill or Battle of Homildon Hill was a conflict between English and Scottish armies on 14 September 1402 in Northumberland, England. The battle was recounted in Shakespeare’s Henry IV, part 1. Although Humbleton Hill is the modern name of the site, over the centuries it has been variously named Homildon, Hameldun, Holmedon, and Homilheugh.

Otterburn is a small village in Northumberland, England, 31 miles (50 km) northwest of Newcastle upon Tyne on the banks of the River Rede, near the confluence of the Otter Burn, from which the village derives its name. It lies within the Cheviot Hills about 16 miles (26 km) from the Scottish border. The parish of Otterburn is at the heart of Redesdale, a Northumbrian upland valley. 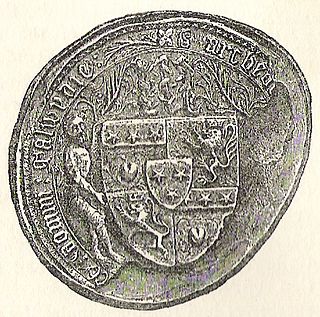 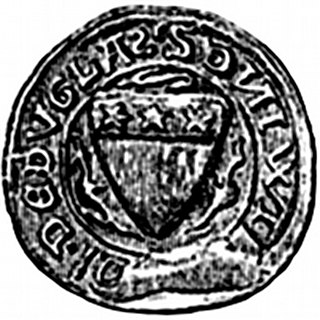 Sir William Douglas of Nithsdale was a Scottish knight and Northern Crusader.

Hugh the Dull was Lord of Douglas, a Scottish nobleman and cleric.

John Douglas, Lord of Balvenie was the youngest of the five Black Douglas brothers, who rebelled against King James II of Scotland.

The Maxwell, later Stirling-Maxwell, later Maxwell Macdonald Baronetcy, of Pollock in the County of Renfrew, is a title in the Baronetage of Nova Scotia. It was created on 12 April 1682 for John Maxwell, with remainder to the heirs of the body. In 1707 he was given a new patent extending the remainder to heirs of entail in his lands and estates. Maxwell was Lord Justice Clerk of Scotland from 1699 to 1702, and Rector of the University of Glasgow from 1691 to 1718.

The Battle of Sark, alternatively called the Battle of Lochmaben Stone, was fought between England and Scotland in October 1448. A large battle, it was the first significant Scottish victory over the English in over half a century, following the Battle of Otterburn of 1388. It placed the Scots in a position of strength against the English for over a decade, until Edward IV ascended the English throne, and it brought the powerful Douglas family to even greater prominence in Scotland.