James Stemble Duesenberry (July 18, 1918 – October 5, 2009 [1] ) was an American economist. He made a significant contribution to the Keynesian analysis of income and employment with his 1949 doctoral thesis Income, Saving and the Theory of Consumer Behavior.

In Income, Saving and the Theory of Consumer Behavior, Duesenberry questioned basic economic assumptions about consumer behavior. He argued that consumer theory failed to take into account the importance of habit formation in establishing spending patterns. He also stressed the importance of social environment in determining an individual's level of expenditures. He proposed a mechanism called the "demonstration effect" by which people would modify their consumption patterns, not because of changes in income or prices, but from witnessing the consumption expenditures of others that they came into contact with. This phenomena, he argued, was driven by the interdependence of people's preferences and the need to maintain or increase one's social status and prestige. [2] The strong social component driving people's consumption was a key aspect in his formulation of a distinct theory of consumption called the Relative income hypothesis. By this theory, an individual's consumption and savings rate is more dependent on their income relative to those in their community than on their absolute level of income.

While some contemporaries of Duesenberry saw his work as a large contribution to the field, it failed to gain significant traction. Kenneth Arrow believed that Duesenberry's work offered "one of the most significant contributions of the postwar period to our understanding of economic behavior". [3]

Today, however, the work of Duesenberry is largely absent from standard economics textbooks. Yet some, such as Robert H. Frank, [4] argue that it outperforms the alternative theories that displaced it in the 1950s, such as Milton Friedman's Permanent income hypothesis. Frank claims that Duesenberry's theory can explain why the rich tend to save at higher rates than the poor. Even as national income increases, the higher visible consumption of the rich encourages increased spending across other income levels. Additionally, Duesenberry's recognition of the importance of habit formation aligns the observed short-run rigidity of consumption, as families attempt to maintain their previous standard of living even during recessions.

Duesenberry attended the University of Michigan, where he earned his Bachelor of Arts in 1939, his Master of Arts in 1941, and his Doctor of Philosophy in 1948. He served as professor of economics at Harvard University from 1955–1989.

Duesenberry served on the Council of Economic Advisers under President Lyndon Johnson from 1966–68.

Keynesian economics are various macroeconomic theories about how economic output is strongly influenced by aggregate demand. In the Keynesian view, aggregate demand does not necessarily equal the productive capacity of the economy. Instead, it is influenced by a host of factors. According to Keynes, the productive capacity of the economy sometimes behaves erratically, affecting production, employment, and inflation.

Conspicuous consumption is the spending of money on and the acquiring of luxury goods and services to publicly display economic power of the income or of the accumulated wealth of the buyer. To the conspicuous consumer, such a public display of discretionary economic power is a means of either attaining or maintaining a given social status.

Intertemporal choice is the process by which people make decisions about what and how much to do at various points in time, when choices at one time influence the possibilities available at other points in time. These choices are influenced by the relative value people assign to two or more payoffs at different points in time. Most choices require decision-makers to trade off costs and benefits at different points in time. These decisions may be about saving, work effort, education, nutrition, exercise, health care and so forth. Greater preference for immediate smaller rewards has been associated with many negative outcomes ranging from lower salary to drug addiction.

The Theory of the Leisure Class: An Economic Study of Institutions (1899), by Thorstein Veblen, is a treatise on economics and a detailed, social critique of conspicuous consumption, as a function of social class and of consumerism, derived from the social stratification of people and the division of labour, which are social institutions of the feudal period that have continued to the modern era. 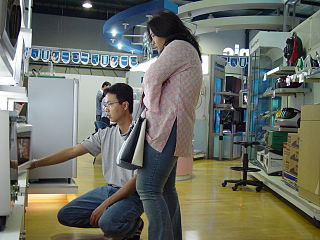 In economics, the consumption function describes a relationship between consumption and disposable income. The concept is believed to have been introduced into macroeconomics by John Maynard Keynes in 1936, who used it to develop the notion of a government spending multiplier.

A consumer economy describes an economy driven by consumer spending as a percent of its gross domestic product, as opposed to the other major components of GDP.

Demonstration effects are effects on the behavior of individuals caused by observation of the actions of others and their consequences. The term is particularly used in political science and sociology to describe the fact that developments in one place will often act as a catalyst in another place.

The permanent income hypothesis (PIH) is an economic theory attempting to describe how agents spread consumption over their lifetimes. First developed by Milton Friedman, it supposes that a person's consumption at a point in time is determined not just by their current income but also by their expected income in future years—their "permanent income". In its simplest form, the hypothesis states that changes in permanent income, rather than changes in temporary income, are what drive the changes in a consumer's consumption patterns. Its predictions of consumption smoothing, where people spread out transitory changes in income over time, depart from the traditional Keynesian emphasis on a higher marginal propensity to consume out of current income. It has had a profound effect on the study of consumer behavior, and provides an explanation for some of the failures of Keynesian demand management techniques.

Developed by James Duesenberry, the relative income hypothesis states that an individual’s attitude to consumption and saving is dictated more by his income in relation to others than by abstract standard of living; the percentage of income consumed by an individual depends on his percentile position within the income distribution.

Hazel Kyrk (1886–1957) was an American economist and pioneer of consumer economics.

Richard Thomas Curtin is an American economist, academic and researcher. He is a Research Professor and has been the Director of Consumer Sentiment Surveys at University of Michigan since 1976.